September 14, 2016 | By: Sweety Prof       Muscle Machines
Want a Bike Camper?
A survival cabin for your own bicycle!
You've seen Vietnamese or Chinese rickshaw-style, two-wheeled and three-wheeled bikes with cargo or passenger cabins attached to them carrying bales of produce to the local street markets in Asia.

But is there an actual market anywhere for bicycle campers?

Ones that you can use to camp out in comfortably.  At any off-road camping grounds or just off-grid in the wilds?  Checking the web, we can find many custom bike camper makers from all over the world.

Bike campers may range from simple container trailers to full-sized builds that can house more than two sleepers.  Several designers have craft-bespoke enterprises that provide a bike camper for outdoors camping or overland adventure.  A custom bike camper doubles as a survival vehicle in the most extreme evac situation.

In urban communities in the Philippines, a bike with a camper attached may not be a feasible vehicle configuration given that road courtesy and traffic rules can create dangerous situations for the towed bike camper.

But in rural or suburban communities, a bike camper can be a very useful.  Bike campers can travel to nearby campsites and enjoy more than a day or two in their insulated and waterproof cabin. 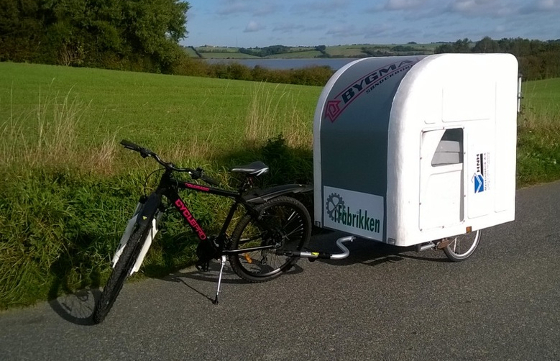 If you would be choosing to get a bike camper for yourself, choose one that can be secured with locks.

Cargo bikes or even the lowly rickshaw or tuk-tuk trikes (very useful work vehicles in the ASEAN and East Asia as well as in India and Pakistan for anyone who needs to deliver goods as part of his trade)  may suffice for some parking anywhere for an afternoon snooze.

But a bike camper gives the rider the extra benefit of going on longer trips out and even staying off-grid in the wilds for months if he pleases.

Lets look at some notable examples that you might want to buy!

Wide Path Campers is a bike camper design by Mads Johansen from Denmark, that allows bicycle fans to roam the countryside as overland adventurers.

Finding one's sweet spot in the countryside, you can setup your own Wild Path Camper from a collapsible towed unit into a small yet fully equipped cabin that is complete with cooking area, sleeping quarters and every camping utility you might want. 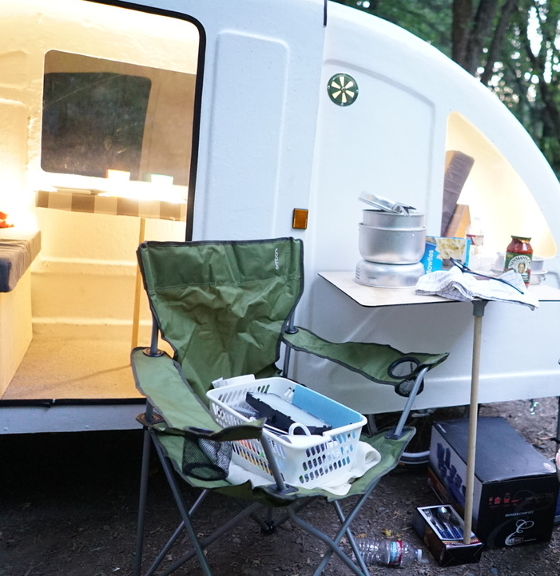 At only 45kg, the hardshell camper is lightweight and easy to tow around with any mountain bike or racer.  The cabin itself is collapsible and folds up into a more compact unit for easier towing in urban traffic and it won't be a hazard while you are on the road unlike larger campers for bikes.

When set up as a camp site shelter, you can move the modular seats inside to form a bed or a small desk writing area.  You get 300 liters of storage space at all times under the bed /sitting area.  The bike camper also comes with its own foldable camping chairs and table for more people to enjoy your company at your campsite if you are a party of more than 2 at your outdoor holiday. 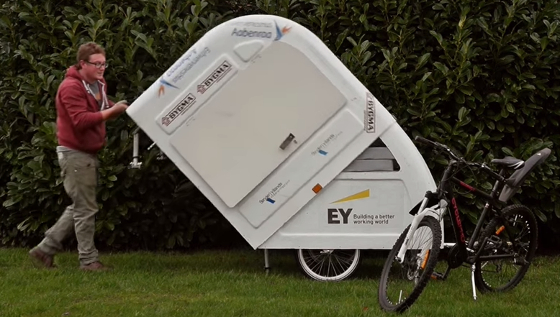 This Wide Path Camper should be the perfect camper for trips to 3-hour ride places like Tagaytay or Laguna.  Or if you are already based in the provinces, you can ride and tow one down near the beach with friends and enjoy a free weekend holiday at any nearby campsite or beach front without having to pay for accommodations.

EcoCapsule offers bike campers as “mobile tiny houses” for outdoor living.  You can live in one for as long as a year, off-grid as long as the area allows for rainfall for your drinking water and has ample sunshine to power th solar panels on the camper.  As a camping shell teardrop-style trailer, the EcoCapsule might look too big for a standard mountain bike or racer to pull along but it can certainly be done.

On its website the Ecocapsule is branded as an eco-life, off-grid mobile cabin that can generate its own power and recycle water from its encampment.  Officially a compact mobile home this bike camper is designed for extended overland adventures for up to a year for up to 2 happy campers.

Limited to just 50 pre-orders, the entire first lot of EcoCapsules are reportedly already sold out. 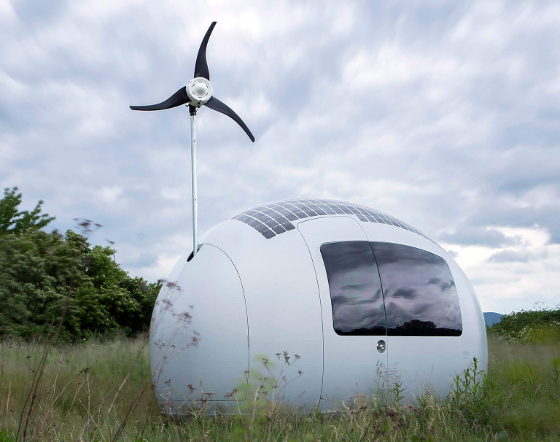 Nice Architects is a design firm from Slovakia which makes the EcoCapsules.  After the initial 50 makes, future EcoCapsule can be custom ordered from their website.  Each towable camper is  powered by solar panels and a 750w retractable wind turbine.  An EcoCapsule can also capture and store rainwater, an using a built-in filter system provides you with all the drinking water you need for a year. There is also a kitchenette, toilet and shower and work/dining area--all within the confines of teardrop style, eggshell caravan,

Another popular camper bike design is Kevin Cyr's Camper Bike, which actually looks like a real caravan trailer for trucks and RVs.  This design was built as a display construct for an art exhibit featuring alternative small housing sculpture art.   Kevin Cyr was a former bike messenger and a current artist / designer who built his semi-famous Camper Bike in China after being inspired by Chinese three-wheeled cargo bikes that were common DIY cargo vehicles among the locals for limited area transport. 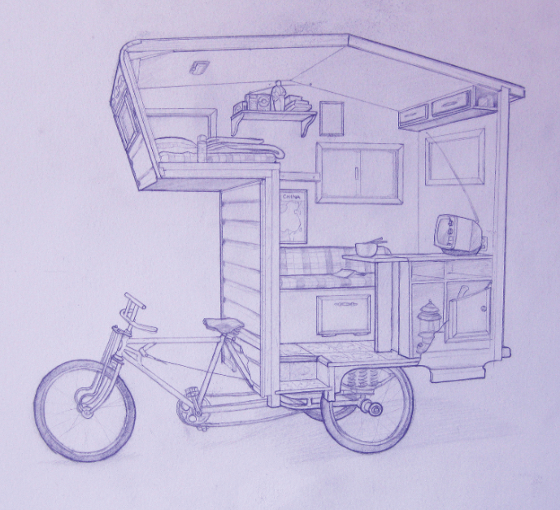 The prototype was built in 2008 in China before going viral online as a conversation piece.  Cyr's camper bike is now still in storage in China but he has posted his blueprints of the caravan-style cabin camper and has a website that features his other RV designs including a tent camper built on top of a shopping cart as DIY bike camper designs. 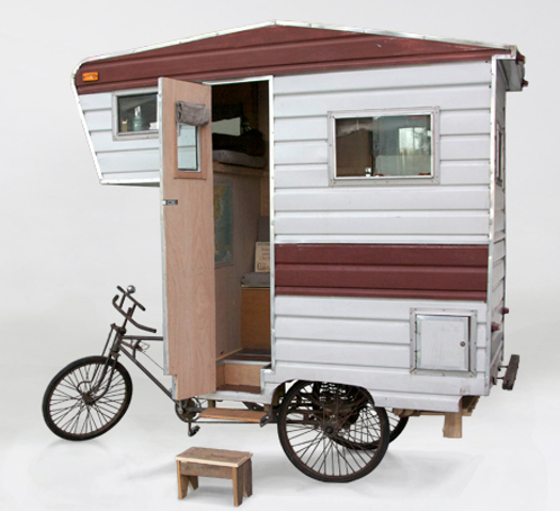 Image Credit:  Kevin Cyr website
If you have some background in CADD design and can play with ideas like the caravan, the rickshaw, the tricycle cab, or the tuk-tuk style bus trike and other towed cabins, you can design your own bike camper blueprints.

Any local ironworks or steel foundry shop or aluminum fabricator help you build the frame and clad it with insulation, a water-proof shell and door locks.  Who knows, it might be the start of an amazing business idea for the many bicycle enthusiasts in the country.
bike camper, bike cabin trailer, diy cabins for bikes, bicycle gear, survival bike, muscle machines, kevin cyr, wide body campers, ecocapsule