Home  »  Arts and Culture  »  Wuxia Favorites for Halloween: Once Upon a Time x 3 is Spooky Romances

Wuxia Favorites for Halloween: Once Upon a Time x 3 is Spooky Romances

October 24, 2017       Arts and Culture
Once Upon A Time x 3
is Spooky Romance
Wuxia spooky fairy tale movie marathon
for your Halloween or Sam Hain wind down.

It's that time of the year again when we celebrate Halloween with whatever corny rituals we feel like doing.  Or if you are new convert to celebrating Sam Hain Harvest Festival with an American Pilgrim Thanksgiving kind-of-feast, then that has its own superstitious and good luck rituals that also are fun, harmless and even illuminating as a turnaround on what has imposed on us as Christians for quite a while now.  After you gorge on the food and the booze or whatever you're celebrating with this year, take time to ready your copies of the following Wuxia spooky fairy tale movies: Once Upon a Time (2017), A Chinese Ghost Story 2 (2013), and A Chinese Tall Story (2004).  If you have study group scheduled this weekend, you can actually sneak this in as your guilty pleasure after getting all of the work done and enjoy the Halloween week coming up.

The earliest of the three is A Chinese Tall Story which is sort of like a Goose Girl / Ugly Duckling fairy tail, but uses Chinese folklore about lizard imps, demons and monk demon-hunters as its romantic characters.  It is funny and endearing in its own inimitable manner, and you get to see super celebrity, Bing Bing Fan, before she became then superstar she is right now, as an alien princess, and fan favorite, Charlene Choi as the lizard-imp (ugly duckling) who falls in love with the monk and transforms into a beautiful princess to save him.  The story has been disparaged as having rough cut continuity and is a strange comedy art film but this particular movie has become a cult classic in its own right with many fans falling in love with Charlene Choi's character as ugly duckling princess.  It also has one of the most beautifully rendered Chinese love song MTV which you can check out online. 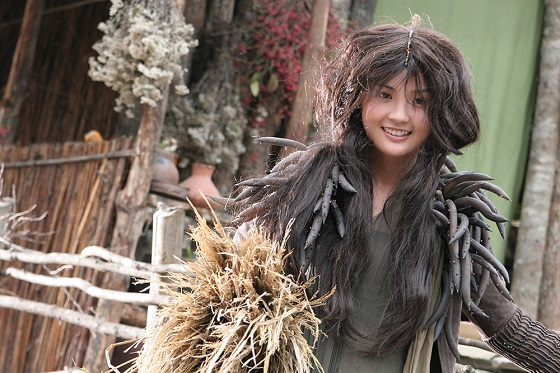 Image Credit:  Emperor Motion Pictures  (fair use)
Charlene Choi as Meiyan, the Lizard Imp peon who
transforms into an angel to save her beloved.

If you like strong female characters who are still identifiably female in how they are heroic and who are unashamed about expressing their feelings about the hero protagonist, Chinese Wuxia movies like A Chinese Tall Story should be one of your first looks at this sort of treatment for fantasy and fairy tale epics, even if most of them have tragic endings to emphasize the loss as a more romantic punch for their audience.  A Chinese Tall Story has plenty of lover's quarrels in the same vein as most Pinoy romance movies, but the setting is more surreal and beautiful as fantasy adventure and overwhelmingly engaging, because you are literally transported into a dream world.  Bring plenty of cry hankies for this movie if are a sappy girl or sentimental dudebro. 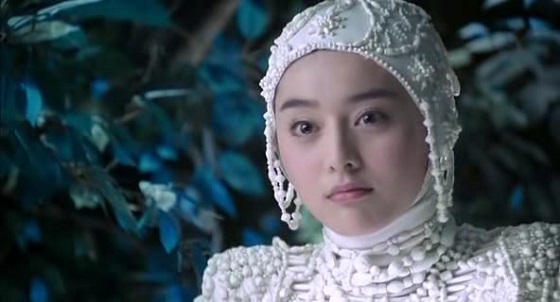 
A Chinese Fairy Tale (also A Chinese Ghost Story circa 2011)

Our second pick is a new story and completely different from the three previous movies featuring zombie romance, A Chinese Ghost Story with Samo Hung but this time featuring Liu Yifei as the demon who falls in love with a demon hunter monk because of his stash of candy and a lot of wooing and hanging around with lots or candy.  In this movie, the demon hunter is supposed to kill Liu Yifei but falls in love with her, and the 1000-year-old, local tree of darkness, reawakens its unholy spirit mother of all unholies by luring lost travellers in the mountain in the tree lair and having her spider demon spirits drain their souls like vampires. 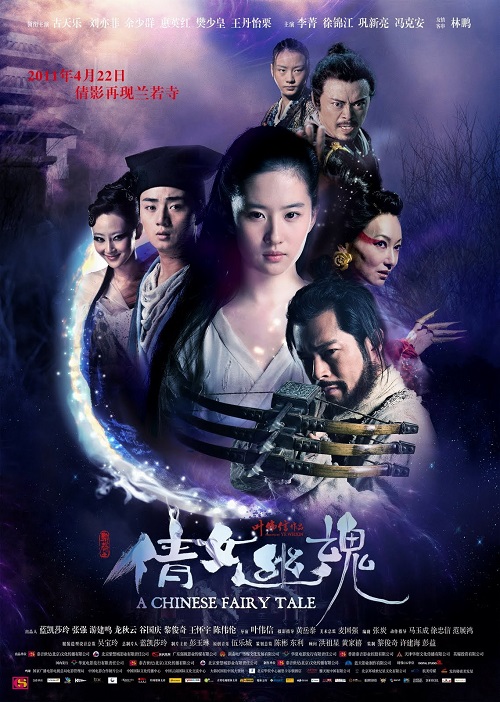 There was a time in Filipino cinema when action heroes in the 70s and 80s had a horse rider, swashbuckler hero adventuring in some godforsaken mountain enclave and encountering supernatural threats to some isolated town and he would rescue the locals and win the local beauty's heart, A Chinese Fairy Tale aka A Chinese Ghost Story remake should remind many Pinoys of those good ole days when we had stuff like this and now, it seems the Chinese Wuxia and Bollywood epic fantasy films are now making their statement on how a spooky fairy tale adventure can be both a romance, sexy and a family movie to enjoy for feast celebrations like Halloween or Sam Hain harvest eve festival.

Video Credit: Golden Sun Films (Hong Kong, International)
Huaxia Film Distribution  (Fair Use)
Like modern Wuxia movies, you get plenty of wire-fu fight scenes and bullet time in A Chinese Fairy Tale, plus the traditional ending of Wuxia romance dramas where either the male lead or the female lead is lost tragically, just as they declare their love for each other.  Liu Yifei is gorgeous in this movie, and as with all Wuxia romances, the method acting carries the characters into larger than life personas that will be your generation's new imprint for prince charming and damsel in distress.  This movie has been panned by fans of the original three for being too Hollywood CGI cute and it indeed is imprinted for a new generation of fans for spooky romances and it does really work as an endearing spooky romance if you've never watched the previous three Chinese Ghost Story movies.

Our third pick for Wuxia spooky romance is this year's all out eye candy romance fantasy, Once Upon a Time.  Not anything like the Jet Lee kung fu epic series, but something along the lines of A Chinese Tall Story, where two divine soulmates in East Asian Heaven encounter rivals that create loss and separation, until lifetimes pass, and karma reunites the two heavenly characters again in the end for happily evermore.  It starts with the ethereally gorgeous Bai Qian (Liu Yifei) jumping off a cliff into a vortex and turning into a nine-tailed fox to survive the fall on Earth from Heaven.

Although almost tragic by the middle of the tale, the romance in this movie ends well with the princess-concubine who bore the hero-god's son, waits for her prince Ye Hua (a name that strangely also translates to Jesus in western lore) to thaw out eons after his battle with a demon who would cause the end of the world. 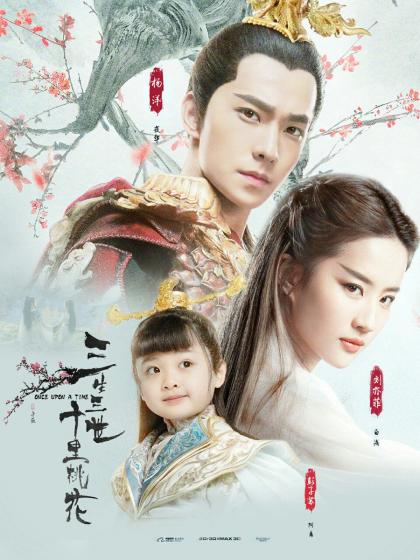 This movie has a fractured narrative sequence in parts and plenty of info dump, backstory memory sequences to explain why the lovers are in the unfortunate state of forgetfulness even in the presenve of one another.  But that is worked seamlessly into a fairy tale flavored story without the narrative being cloying or boring in its revelation.  Bring extra cry pillows for this movie too.

As romances go, all scenes are supposed to be some kind of cliche by themselves, but in an endearing and heart warming corniness, like the bullet time cooking sequence where the lead character cooks food for Liu Yifei like some ramen advertisement.  The torture and betrayal scenes by a jealous concubine, female companion of the god hero is put together just right without need for unnecesary gore or violence, and the final fight scenes between the armies of heaven and the forces of darkness are also worthy of all Wuxis epic fighting movies.  This is a fairy tale that will blow you away and make you watch it over and over as a guilty pleasure.  It is also base on the highly popular Chinese fantasy novel, Three Lives Three Worlds, Ten Miles of Peach Blossoms, if you can read Mandarin or find an English language translation, grab one too.

Plenty of good down time on Halloween weekend deserves plenty of good Chinese Wuxia spooky romance dramas for you to gorge on.  Sweet monsters, heart warming stories, unholy villains, and your favorite drama actor performing unforgettable roles in a romantic horror movie.  Grab all your weird friends and have a movie marathon for Sam Hain after you plant that apple under your door step and light a candle in time for midnight.
arts and culture, wuxia marathon, spooky fairy tale romances, liu yifei, halloween movies, halloween movie marathon, sam hain fastival movie marathon, once upon a time, a chinese tall story, a chinese fairy tail, a chinese ghost story