Supercars are for fogeys from the 90s.  Forget bullet-proof stretch Escalades.  Rudeboy, rap superstars and spooks these days ride in a gorgeous luxury tank truck.  All for the price of a marquee supercar.   Affectionately dubbed as 'City Tanks,' custom-built, light armored, personnel vehicles are becoming the rage these past few years.

Forget the armored Mercedes Benz used by European diplomats.  Luxury, survival SUVs aren't just bullet-proof and armored.  You literally get a luxury mini-APC (armored personnel carrier) or something close to one for top dollar and outfitted with vanities like gaming consoles and whale penis leather interiors.

Given terrorist activity reaching places like Paris, and attacks even affecting Russia, safe and armored vehicles are no longer some insane luxury but a better value for anyone looking for a ride that looks amazing and is more than super protected from almost any kind of armed threat.  Explosive kinds of.

Luxury armored SUVs have both off-road capability and street-legal specs without any restrictions. With the armored vehicle keeping the speed and handling capabilities of a commercial vehicle and the carrying capacity for either a group of 4 troops or bodyguards, or survival gear for the family.  Armor specs are rated at fifth level of protection: crew protection against small arms fire, artillery shell fragments and mine or IED explosions.  Including getting fired at from the side by a RPG-7 toting suicide attacker.

Check out what's hot among the finest armored SUVs and and custom 'tank' trucks.

The custom-made Pit-Bull VX SWAT Truck was introduced at the International Association of Chiefs of Police Conference by Alpine Armoring, a renown U.S. Department of Defense contractor for armored vehicles.  The VX is an armored SUV Truck built to withstand arms fire and munitions attacks.  Vehicle windows are fitted with ballistic glass that can blunt even a close-range shot from a high-powered rifle.  Glass layering absorbs and spreads out the energy of any blast attack. 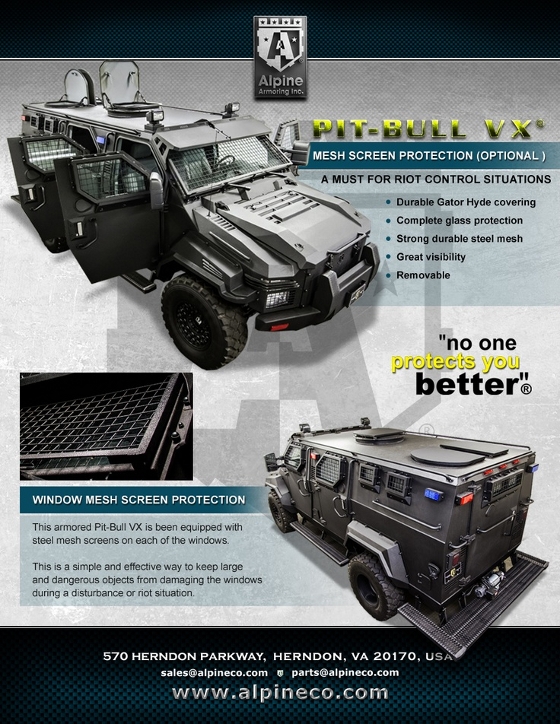 Image is all rights reserved to Alpine Armoring Inc., used for review purposes only.

The Pit Bull is VX SWAT truck is designed with anti-mine protection and can withstand attacks from modern frag explosives to small arms fire. Vehicle doors are overlapped with ballistic steel so no stray bullets will penetrate through the door seams from unlikely attack angles.

Given all that protective armor, the Pit-Bull VX actually weighs less than the stock F-550 it is built on top of.  Your VX weighs 16,600 pounds while the base F-550 with the 6.7-liter turbodiesel V8 has a max weight of 19,500 pounds.  You have up to 3,000 pounds of leeway for gear or an elite force like a 6 man SWAT team.  No single person has been killed in any vehicle custom armored by Alpine, according to their own field testing experience.

If you plan on getting an armored limousine or some marquee supercar, why not get a PitBull VX instead?  For around $225K up to $300K if you want all the options for your luxury tank truck, you get as good and safe as Mad Max waaaay before SHTF.

Wanna armored SUV for $489,000?  The Conquest Knight XV is THE favored luxury vehicle of professional star athletes, high government officials, and cushy CEOs of mega-corporations.  Forgive our inclusion of a 'tank' truck that is not built on top of any existing frame but one that is its own marquee.  This is the one that takes the cake.  If you don't like the Pombron from Russia, get this instead.

Aside from keeping safe and riding safe, the new Knight XV has a turbo charger package,  multilink air ride suspension system, and carbon fiber instrument panel.  You can custom stretch the SUV up to 24-inches longer, and even convert to right-hand drive if you're from Asia or some EU states.  Your armored fat cat, 'tank' truck comforts include electronic touch handles, retractable custom flat screen television, TracVision satellite system, ultra suede seating and an electrostatic window tinting system. 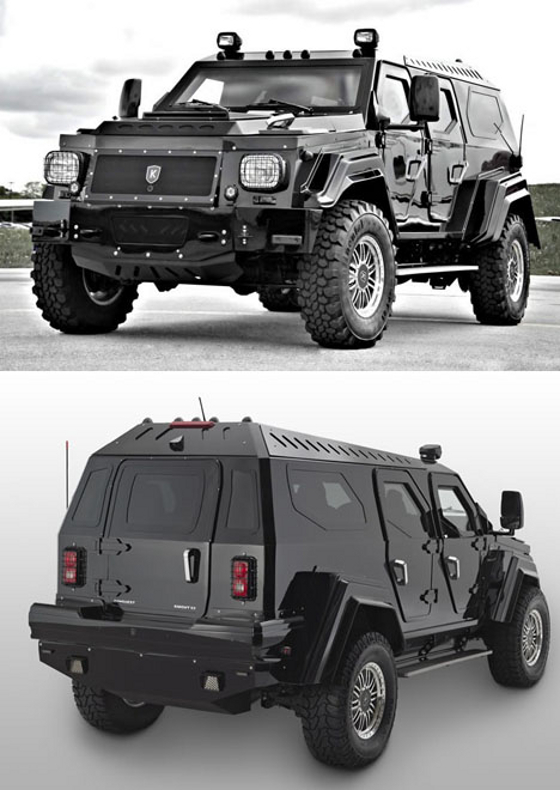 Image is all rights reserved to Conquest Vehicles, used for review purposes only

The Conquest Knight XV has two engine options, one is a gas version that features a General Motors 6.0-liter V8 engine with the power of 325 stallions and 400 lb/ft of torque. Or you can choose the diesel engine powertrain: a 6.7-liter Cummins ISB engine that produces 300 horsepower and 660 lb/ft of torque. Both engines are mated to a five-speed Torqshift automatic transmission

Image is all rights reserved to Terradyne Armoreed Vehicles,
used for review purposes only
A standard Terradyne Gurkha is equipped with a more than reliable 6.7-litre V8 engine (turbo diesel), electric motor, 12V electrical system and two batteries. Its fuel tank capacity is 151 l. This APC truck can be powered both by petrol engine and by electric traction if necessary.


video is allrights reserved to D2Autosport You Tube channel used for review purposes.

Cleveland Cavaliers' superstar basketball guard, J.R. Smith, owns a custom Gurkha F5 (the car used in the “Fast Five” movie). The price tag of Smith's vehicle which is custom-built on the base of a Balkan Mk3, an LAPV modification, is 450,000 USD.  D2Autosport, a specialist builder of luxury vehicle conversions has featured a Gurkha among its special conversions.

These three are not the only armored SUV conversions and custom models available in the market right now.  There are even actual military spec trucks that you can buy, whether used or recent makes that can be converted into luxury survival vehicles.  The Overland Expo, an adventure vehicle expo that features all sorts of survival vehicles features many more custom build, armored rides for any budget.  We'll try to feature as many of these on Muscle Machines too.  You might want to have that truck lying in your garage converted into a good-sized survival ride too!
muscle machines, custom-built luxury armor, stock suvs custom armored, luxury armored suvs, gurkha, pitbull vx, knight xv, alpine armorers, terradyne armored vehicles, conquest vehicles