Home  »  Arts and Culture  »  BabyMetal: Kawai and Death Metal to Steal your Soul

BabyMetal: Kawai and Death Metal to Steal your Soul

March 29, 2014 | By: Leader Desslok       Arts and Culture
BABYMETAL !
Watch out Korea.  If new Japanese Idol sensation BabyMetal steals the THUNDER from current pop darlings--sexy dance Kpop performers, it will be another renaissance for ROCK music for the next half decade.  All fan reviews on Amazon Japan have already rated them at 5 stars.
For older rock fans who aren't too jaded or purist about new rock music, remember how Metallica stole your soul with each of their first three albums?  That's how you'll get the mad-on with each of Babymetal's music videos and songs.  They're not GWAR or Lordi, with THAT kind of shock performance.
In their music videos, you see three teen girls in rah-rah skirts and goth prom livery, performing choreogrpahed dance routines that include intense horn sign (nee fox or kitsune sign) waving and headbanging pigtails.  All while singing and shouting in the key of cute major.  Not really strange once you see them rock. 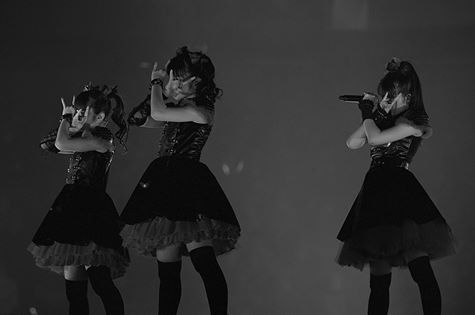 They have been around since 2011.  You've seen their sensational death metal videos, which are disturbing for anyone seeing an aidoru trio doing cute and catchy Jpop song & dance routines backed by death metal  shred guitar and drum blasts for the first time.  Sugoi?  You betcha.

Idol music is a Japanese genre of pop music which sells sugary sweet, extremely catchy songs and cuteness.  Even though the aidoru themselves are studio-manufactured singing teen stars who are promoted until their popularity runs out, the fans love everything about this!   In the world of Japanese music, AMUSE is one of the largest and most influential labels for idol music.
Still, it’s hard to imagine two genres more incongruous.  BABYMETAL finally releasing their first full-length album,  now available world-wide.  They've called it the soundtrack to the adorable apocalypse. Sang by memory angels, of course.  Actually, you will enjoy their music despite the initial hesitation.  Once the surprise wears off, the music grows on you.  And as all metal fans know from the bottom of their soul...you are a fan for life.  Don't ever buy into the argument that there will never ever be another Metallica.  The heirs just broke out.
The AIDORU phenomenon (Pop Idol Star)

When Macross became a cultural landmark way back when the studio-manufactured aidoru or female teen pop idol  was immortalized as part of Japan's music landscape, they put her together as all sorts of everything, from pop, to dance to even rock, as long as she was saccharine sweet and pop idol lovely, the studio had a best selling hit.  Which they mined until everyone got tired and moved on to the next pop idol offering.
Enter 1994, Fire Bomber was a secret band that played all the hit music on the official sequel to the original Macross, Macross 7.  In the fictional band, Tomoe Sakurai and Chie Kajiura made the female rock aidoru band member, one of the most enduring of aidoru characterizations.  After the season for Macross 7 ended, a huge concert revealing the identities of the band celebrated the transition from bubblegum pop to rock music in anime soundtracks. 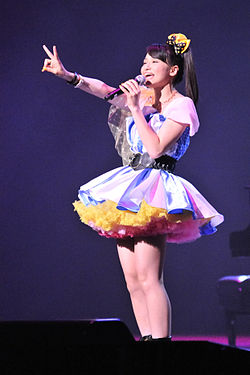 While we in the Philippines have been stuck with the curse of the Whitney Houston belt-a-ballad singer forever, our braver Asian neighbors grabbed all the bubblegum and rock and roll from the U.S. and turned it into their cultural imprint for popular music.  Nobody else performs better pop music than Kpop performers, and no one else plays better rock and shred metal better than Japanese performers.  In Asia, and as we have seen the world over, everyone is warming up to them with lots of brotherly love and sisterly fangirling than bad-boy Bieber and what-have-you for American Idol lameness.  Ironically too, the Seiyuu and Aidoru for Macross Frontier's Ranka Lee character was a Japanese-Filipina, Megumi Nakajima who went on to become probably the only Filipina who sold outl the BUDOKAN concert hall with fellow Japanese femme rockstar, May Nakabayashi.
Since Macross 7, female rock singers, aidoru of all ages in Jpop have come and gone, but it took AMUSE, a Japanese idol pop music studio to cross that forbidden territory of mixing genres so anachronistic to each other that it became the most daring blockbuster idea for music now that most everything in popular rock is as stale as it is.  Everybody keeps saying nobody will ever be like Metallica.  Oops.  Look again sirs.

Babymetal are three young girls who sing, dance, and shout as a pop idol trio, supported by an incredible live metal band.  When asked to introduce themselves in interviews, the 16 year old lead singer growls out..Su-Metal Death! , while the two backup dancer/screamers are 14 year olds, Yui-Metal Death and Moa-Metal Death.  Together, in unison they reveal their band name as BabyMetal-Death!   In live appearances, the taller Su-Metal takes the middle spot as aidoru singer, with Yoi-MetaL and Moa-Meta flanking her on either side. 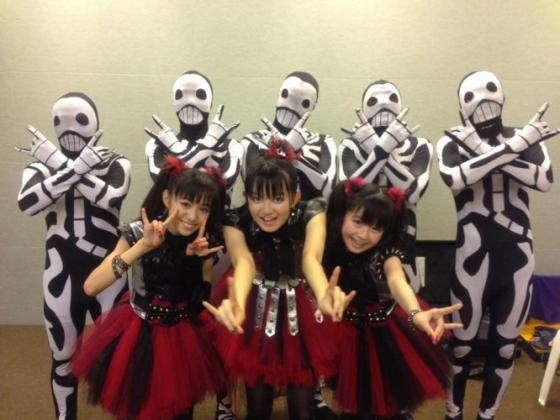 All three come from a TV show called Sakura Gessui, a reality show that simulates an academy of female teen kids under training as aidoru, grouping as various girl groups singing various songs.  BabyMetal was one of the ideas that spawned from the show into the rolling Pop Metal juggernaut it is right now.  BabyMetal was created by KobametalL, a producer at Amuse, Inc.  “We have this group called Perfume and I really like them. But I thought, if I’m gonna make a group, how would I do it? I really like metal, so I figured I’d try mixing metal and idol music,” metioned Kobametal to     “When we actually tried it out, it turned out to be even better than I had imagined!”
“[We wanted] to incite that strange feeling that makes you go ‘what the HELL is this?!’” says Kobametal, because that’s where the all the fun is. “[If] we were to do just straight metal—having the girls screaming—it probably wouldn’t be as interesting!”
When figuring out how to offer the group's music to the public, Kobametal and crew came up with “Only One,” which brashly proclaims that  with any number of metal bands and idol groups to choose from, there is only one BabyMetal!  The CDs are available from a number of different retailers, including Tsutaya, HMV, Tower Records, Rakuten, and Amazon Japan.  All the major news services have covered the band in their music news updates with aplomb and excitement. If you get to download the album or the videos from online let us know which track is your favorite!  It might be read as blasphemy but BabyMetal are even better than Fire Bomber, in all the right ways they're cheesy tops and waaaay cute enough to be finest pop metal band from Japan.
Homage by Toshihiro Egawa

Even metal album artist Toshihiro Egawa has created t-shirt artwork for BabyMetal. Inspiring Toshihiro Egawa to create a shirt design is like a really giant leap forward for any death metal band.  Egawa is a 40-year old artist from Osaka who has become one of the world’s best known creators of album art and shirt designs for the more brutal end of the death metal and slam spectrum.  He creates all those thoroughly disturbing images and gore-drenched covers for all your favorite western Death Metal and Black Metal bands. 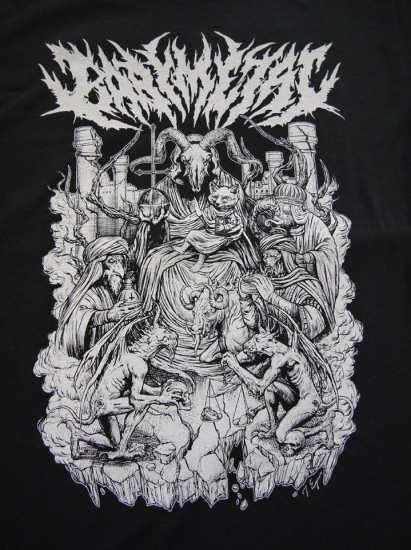 How the Kids Feel about Singing......Death Metal

Interviewed on Rocketnews24.com, the members of the band revealed how surprising it was to find hordes of international fans waiting at their concerts and demanding a visit to their country. Su-Metal was pleasantly shocked at the response, “In Singapore, when we actually met foreign fans and talked to them, it was like ‘Wow! They really exist!  At first I thought [it] was kind of scary. They looked like ghosts with their white face paint, and their screams.”
Yui-Metal says, “It’s fun and I see why people enjoy it so much! I still don’t completely understand extreme metal, but I’m interested.”  Su-Metal said, “I didn’t even know the word (death metal) at first, so when they played the music for ‘Doki Doki☆Morning’ I was just like, ‘Is this for real?!’”
Now used to the groove of extreme riff blasts, and beat blasts harmonized with the electronica of Jpop, Su-Metal even has fans sending her and the girls with lots of music to acquaint them with the awesome religion of extreme metal. “The number of metal CDs we’ve gotten from fans is always increasing. So, you know, I can’t explain song meanings or anything… but I’ve been listening to a lot of them,” she confesses.
BabyMetal have something nobody else would ever dare to put together.  Not even the devil.  A juxtaposition of the strangest bed fellows in extreme metal and equally extreme Jpop, to produce its uniquely infectious rock and dance anthems.  Harsh and easy-going.  Murderous violence  and playful innocence.   You see it all the time in Japanese cartoon culture:  young girls with powers to fight the forces of darkness.  The only thing that stops an apocalypse.  Memory Angels.