June 11, 2014       Curious Mind
Space Telescopes
A God's Eye View of Space
From the ground we may see stars as blinking or twinkling pin lights.  If you are lucky to see the night sky in an are of the planet with no light pollution or haze from carbon effluents, you will see it as beautiful as this: 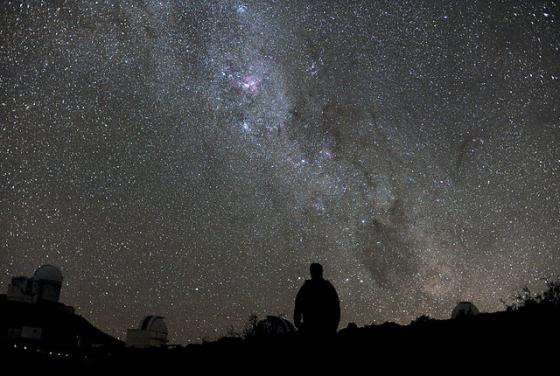 Otherwise, you just see them twinkling pin lights.  Ordinary, optical telescopes have told us most of what we know about the Universe.
Light itself from the stars enable us to see it as an object in the sky and anything that reflects light or is a source of light can be sighted by the naked eye or by by using stargazing telescopes.  Distant stars are easily seen but but there are forms of electromagnetic radiation ( an ocean of vital knowledge ) that is not readily detectable by light telescopes based on the ground.
Because Earth's atmosphere creates a 'haze' that causes light sources to 'twinkle'  the other rays cannot be properly studied on Earth because they are scattered by the atmospheric ozone layer, ground based telescopes and observatories can see only a fraction of the sights lying around in space.
Space Telescopes

A space telescope mounted on a satellite outside Earth's atmosphere is the best way to study the Universe.....so scientists set out to pit one up--the Hubble telescope and soon, the James Webb Space Telescope

All telescopes work by collecting electromagnetic radiation (such as light, infrared, microwaves,or X-rays) given off by distant objects. There are space telescopes that specialize in collecting different kinds of radiation.
The International Ultraviolet Explorer (IUE), launched in 1978, was the first of its type to collect and analyze short-wavelength ultraviolet rays of objects such as supernovae (very bright exploding stars),
Gamma rays, released by violent events like black holes, are studied by other satellites such as NASA's Compton Gamma-Ray Observatory which was launched in 1991.
The Infrared Astronomical Satellite (IRAS) launched in 1983 detected  more than 350,000 new sources of infrared radiation, including six new comets. 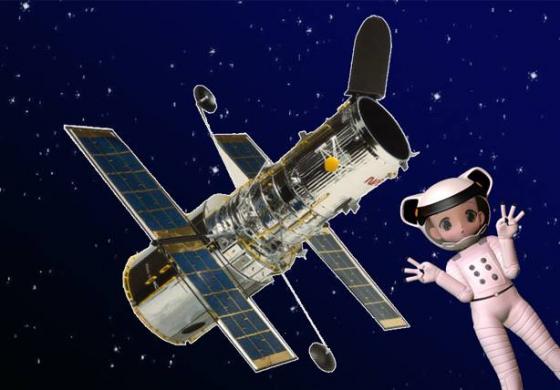 The $2 billion Hubble Space Telescope, launched in 1990, began a new era in space observation, sending back razor-sharp colored pictures of distant galaxies. It is so powerful that it can pick out objects 100 times fainter than the best telescopes on Earth. 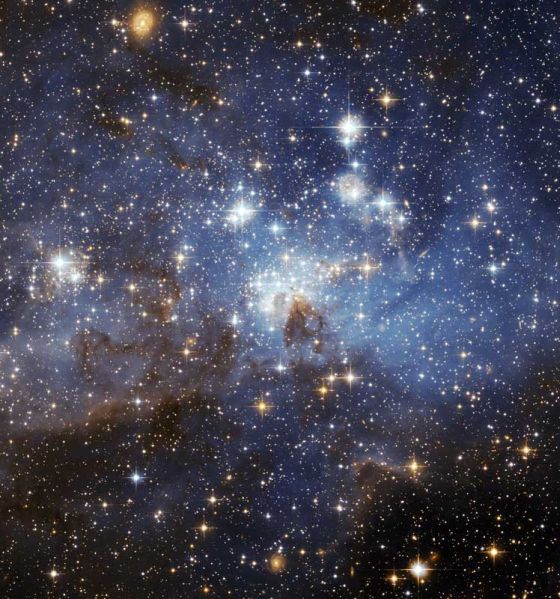 A Star Field in Color Detail as only a Space Telescope can Capture
[ from NASA Hubble Archives and STSd on Hubble.org ]
The Hubble is a Cassegrain reflector telescope. This means that the Hubble has a long tube to let in light, plus various mirrors and lenses for focusing and magnifying the images. Light enters a hole and bounces off a primary mirror and onto a secondary mirror; the secondary mirror then reflects the light back through a hole in the primary mirror to a focal point behind it. The focal point contains three smaller, half-reflective and half-transparent mirrors that relay the light to various instruments. 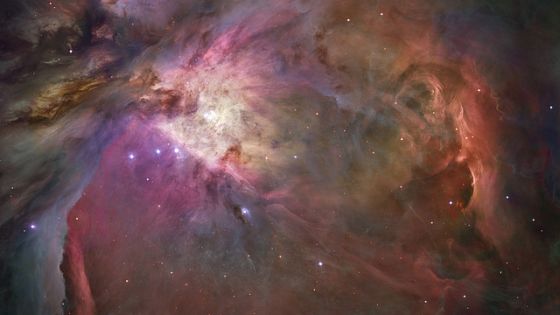 Image Credit:  NASA Hubble Archives and STSd on Hubble.org
The Orion Nebula Captured in Color Detail by the Hubble Telescope
The 46 ft (14 m) Hubble Space Telescope is the largest space telescope ever built.  The Hubble telescope has some special scientific instruments that allow it to view all the different wavelengths on the light spectrum. Some of the most important instruments are the Wide Field and Planetary Camera 2 (WFPC2), which is the telescope's main "eye;" the Space Telescope Imaging Spectrograph (STIS), which acts like a prism to separate incoming colors of light and the Near Infrared Camera and Multi-Object Spectrometer (NICMOS), which allows the telescope to see infrared light.  The two instruments analyze the radiation given off by objects to work out their chemical composition. In addition, three fine guidance sensors help the Hubble to lock onto and track stars.  [source: NASA]

Upgrades over the Years for Hubble

A fault in the Hubble's 8 ft (2.4 m) primary mirror was corrected by additional mirrors and lenses installed by Space Shuttle astronauts in 1993.

New guidance sensors and gyroscopes installed by a Space Shuttle mission in December 1999 ensure the telescope can lock onto and track objects with high precision. The NICMOS is actually made up of three highly sensitive cameras that can see infrared light and thus detect heat. If the Hubble is trying to track an object obscured by interstellar gas and dust, NICMOS can detect the object's heat and form an image. [source: NASA]

In 2002, the Advanced Camera for Surveys was added to the Hubble telescope, doubling its field of view and allowing astronomers to study some of the universe's earliest activity [source Hubble].

The Next Generation of Space Telescopes:  The James Webb

NASA's James Webb Space Telescope (JWST), formerly called the Next Generation Space Telescope (NGST), has been in the planning for over 15 years with a launch date currently set for 2018.  Its special instrumentation will study infrared sources to study how the first stars and galaxies in the Universe were formed.


What Study the Stars from a Space Telescope?

We've already mapped the stars in the sky for navigation by land and sea.  What else is there to be learned from studying space from outside our atmosphere?

Our understanding of physics and climatology can be verified by observing phenomenon within our own solar system and in planetary sytems outside Sol's own.  We've already detected hundreds of other planetary systems that have Goldilocks type planets or planets that are in that zone where their mother stars can nurture life.

We've detected rogue planets freely floating out in space with no mother star, that may number in the thousands or more too.  We've analyzed black holes too and have learned that they may be a way of regenerating a universe.  We know that storms in other planets function differently, sometimes lasting months and years.