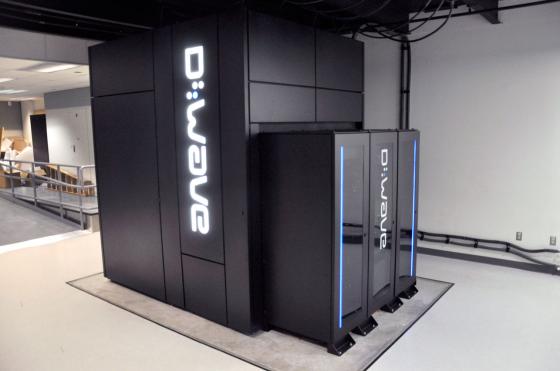 ﻿
Not too long ago, people were heralding the possible use of light activated computers, or one running on optical mirrors and fiber optics instead of a silicon circuit board.  This type of tech is still being tested and enough breakthroughs in physics have shown that light pulses as data can be 'frozen' as a particle and thus it may be stored in some future stable medium and can be accessed.

The best silicon supercomputers today still need to have massive liquid-cooled mechanisms to prevent them from overheating.  All of today's computers still function off reading and analyzing data as variations of binary code or Boolean math based computations.  But NASA has finally installed the first of a possible future standard for supercomputing:  The D-Wave 1 and 2 quantum computer.

The D-Wave is more than just a prototype.  NASA has had the 512 qubit machine operational since September 2013.  The agency's Quantum Artificial Intelligence Laboratory (QuAIL) team will be demonstrating how quantum computing and quantum algorithms can be better than the best supercomputer systems we have today and improve the agency’s ability to solve difficult optimization problems for missions in aeronautics, Earth and space sciences, and space exploration.

For the moment, the agency is reported to be focuscing on three very basic applications for the D-Wave 1 and 2.

Optimizing the schedule of work on the International Space Station is one that will test the ability of the system.  Because experiments and other chores on the station can only be carried out when certain conditions are met, let's say a chemical process experiment needs to be observed every 6 hours or so, or some maintennance work on the ship needs seeing to at another time, the optimization of when work is scheduled is a high priority for the U.S. Space agency so that the resident astronauts don't miss out on anything and make the best use of their time on the station.

NASA is also using the D-Wave systems to optimize the work on highly complex problems being processed on their supercomputer facility.  The quantum system is set to optimize when some problems are to be run on NASA's primary supercomputers.  At any instance of time, there are hundreds of individual jobs running on NASA's systems, while other projects are lined up. The quantum computer will help in turnover , well as prioritize projects and jobs, since computing time on the supercomputer is precious.


The third application for the D-Wave is the Kepler search for exoplanets. NASA astronomers use the Kepler's various telescopes to check for curvatures of light from stats that might reveal a potential exoplanet because a planet that passes across its mother star will dim the light for a moment.   The quantum rig will pore through tons of data from the Kepler satellite sensors and telescopes for the telltale signs of exoplanets.

What is Quantum Computing?

Quantum computing is based on quantum bits or qubits. Unlike traditional computers, where data is reduced to a binary code of either zero or one then processed, a qubit can represent a zero, a one, or both values simultaneously  allowing information to be processed in ways that have no equivalent in classical computing, taking advantage of phenomena such as quantum tunneling and quantum entanglement.

Theoretically, a quantum computer can solve certain problems in a fraction of the time that today's computer can accomplish.  A few days (quantum gear) compared to a million years (standard computer) is a light year of progress for any computing system.  If the QuAIL team irons out the kinks in the system, such as the margins for error in quantum annealing, we may soon see commercial applications of quantum systems as commonplace as the vacuum cleaner and the microwave oven, both of which were spin-offs of tech used in the first moon missions.

NASA plans to create quantum AI algorithms, ways of breaking down highly complex problems for faster processing, and hardwiring some quantum processes (like ROM in today's computers), and ways of allowing both quantum machines and classic computers to work seamlessly each other via hybrid algorithms.  In the next 5 years, the agency will run these so we can have practical quantum computing applications and a better understanding how it works.