February 5, 2016       Muscle Machines
Airships Are Back!
The World Revives Balloon Airships for
Safely Carrying Cargo and People Around
Flying above traffic with faster and safer cargo deliveries overland, modern aircraft builders are rigging hybrid airship-cargo aircraft to be more than just the steampunk-era balloon ships: Part-vector thrust hovercraft and 90-percent giant cargo airship, these modern aircraft  are going to be the future of transportation in areas and geographical markets where there is very little transport infrastructure such as passable roads, bridges, sea ports, and passenger and cargo airports. 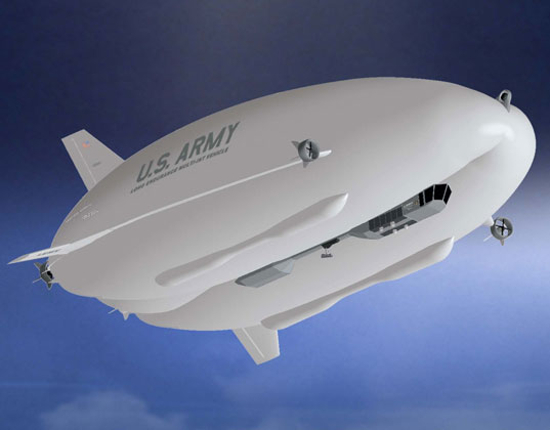 Traveling faster than ocean freight at the same cost, days instead of weeks.  Modern hybrid airships can conceivably travel over the poles to shorten mission times and avoid extreme weather disturbances running across the planet.  Balloon-ship hybrids may soon be the future of short cargo hauling and even be safe enough for limited passenger ferrying for as long as the weather permits.

The standard for the modern airship may be Lockheed Martin's Hybrid Airship, based off its prototype P791 model airship used in a design competition for a military intelligence airship in 2011.  Lockheed is the same builder of the poster plane for the U.S. Air Force, the F-22 'Raptor' stealth fighter.  Using its Skunk Works division, Lockheed redesigned the balloon-airship as a modern aircraft that can transport people and cargo safer and with more flexibility than the retro transport vehicle could.  It's hybrid airship is powered and maneuvered by thrust-vectoring propellers.  It's shape is more like a huge space shuttle than the Goodyear blimp or the Hindenburg, but it still uses plenty of helium to fly.

Lockheed offers its line of hybrid airships with the capacity for up to 300 freight containers.  In the future the upgraded designs of its P791 base model may carry up to 500 tons of cargo.  Carrying supplies to distant locations that are difficult to reach via normal cargo transport, such as Antarctica, or U.S. support bases scattered around the globe.  A 500-ton airship vehicle would allow for the creation of inland ports instead of expensive road networks for remote locations such as mountain communities, forward bases, research facilities and frontier towns.  Lockheed's hybrid airship also does not require a launch tower or landing platform but has an air cushion system that will allow the hybrid cargo plane to accomplish vertical take-off and landings and sit like a hovercraft over a body of water.  The airship can land like a floating truck backing up onto a dock for easy unloading of cargo.

Also in 2011, World SkyCat, an airship-building firm from the U.K., demonstrated its SkyKitten prototype, an airship and catamaran design for cargo and ferry capable of 50 tons of freight carry.  Its SkyKitten can also be scaled into bigger airships called SkyCats that can carry heavier loads and more people.

In 2013, the Aeros Corporation, based near San Diego, flew an airship called Dragon Dream, 90m (295ft) long and 27m wide.  The design of Aeroscraft airships allow for cargo bays much larger than any container hold in any commercial freight aircraft carrier today (including Boeing and the Antonov cargo planes).  The Aeroscraft airship is operated by its own patented, computer-controlled, automated directional thrust and station-keeping technology (COSH) which keeps the balloon craft steady in place and not float away as heavy cargo is loaded off or on while the it hovers over its payload.  Aeroscraft is still trying to get commercial production going for its cargo hybrid airship.

Image is from Lockheed Martin used for review purposes.
The Lockheed P791 Hybrid Airship has undergone further development for
commercial cargo and ferry products.  Hybrid Enterprises is their commercial
partner selling the airships. 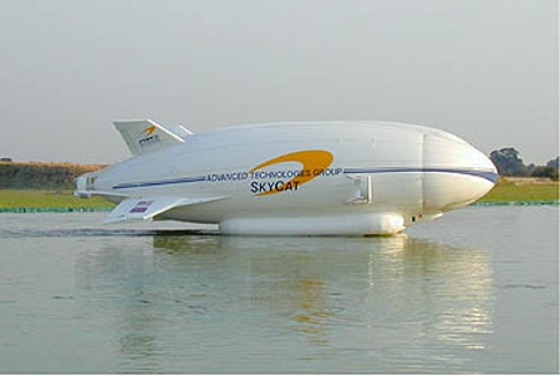 Image from World SkyCat, Inc. used for review purposes.
World SkyCat's prototype SkyKitten, is an airhsip-catamaran design from the U.K.
that can be scaled into bigger ships for cargo and ferry missions.
In the near future hybrid airships would partially change the world's cargo forwarding and delivery systems.  Today, we have a worldwide grid  that relies on multiple modes of transport. A supply chain linked by truck to train to ship/airplane to truck: an airship would provide the equivalent of door-to-door delivery. The projected costs of an airship cargo system and ferrying is going to be significantly less than traditional air cargo transport, have better access to remote areas than sea transport.  Airship cargo also possesses more flexibility than heavy-cargo helicopter transport, used for limited missions.

Lockheed Martin's application for FAA certification for building hybrid airships was approved as of late 2015, and will be delivering its first commercial airships in 2018.

Military Missions
Aside from freight cargo and passenger ferrying, an airship may serve many missions.  Both Lockheed Martin and Aeros are tuning their airships for mission specific requirements: From Intelligence, Surveillance, and Reconnaissance (ISR), to border and security applications, maritime patrol, and search and rescue.  Lockheed Martin and Northrop Grumman both participated in $516 million airship design for the U.S. Army in 2011, which Northrop won, but the Army's airship program eventually got cancelled in 2013 because of cost constraints.  Lockheed continued design development for commercial applications of its own hybrid cargo airship, the P179. 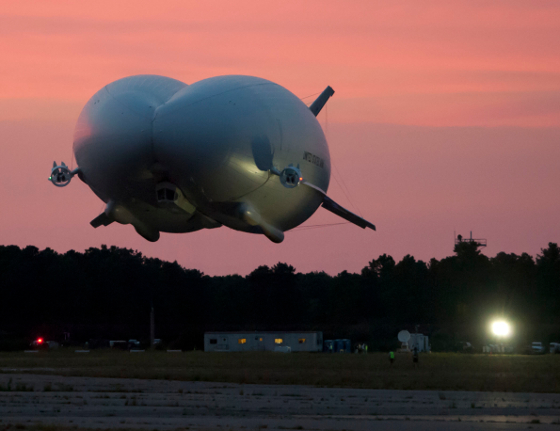 Aeros claims that its lighter-than-air aircraft can sustain operations longer in geostationary hover for support missions, is equipped for 24-hour, sustained 360° monitoring and imaging capability, can re-equip as well as deliver flexible payload options, and is less costly to operate compared to similar aircraft cargo and monitoring operations.

Modern airships like the Aeros and the Lockheed Hybird Airship have enough onboard space for data workstations for monitoring a variety of situations--guiding threat response systems as part of command and control forward bases.  A military airship can carry payloads projected to reach 100s of tons with equipment like  long-range radar and  HD daylight and thermal imaging (EO/IR) systems as well as be outfitted with downlinks  for secure data communications in sensitive remote operations.