What Is Creative Writing?

July 3, 2014 | By: Mister ROBOTO       How It Works
What Is Creative Writing?
For fiction, creative writing is telling a story in an imaginative and engaging manner that expresses the writer's insights and emotions.  Sometimes it may be poetic and expressive, sometimes it may be dense and obtuse yet still lyrical in its own way. 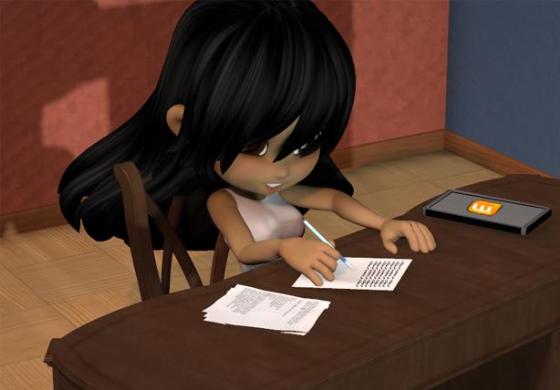 Wattpad is the most popular mobile app in the Philippines right now with more than 2 and a half million registered users alone.  More than Facebook.  And most of those users are kids sharing stories.  On facebook, there are local Wattpad user groups in the hundreds, all of them asking questions of how to write a better story and suggestions for interesting characters.  Kids everywhere are now more than mildly interested in writing their own stories so that they can share more than just selfies and gossip.  Thank God for Wattpad!
For everyone who feeds on stories from Wattpad, creative writing is the most intimate way of sharing themselves other than selfies and gossip.  No one is constrained by an editorial board telling them how it should be.  If people like someone's story, it becomes popular no matter who thumbs their nose at whatever story is popular at any moment on Wattpad.  And there are fewer trolls and haters because everyone loves stories and there are more than enough on Wattpad going around.
For creative writing, kids always want to know.  How do we do get started?
Tips and tricks for beginners

Write a comic book script:   Draw out your storyboard even!  It is the fastest way to learn story structure visually, and you learn to pace scenes no matter if you are writing a 3 page story or a 24 page one.  You get to literally feel out the story, both visually and by sentence.  And if you want to do all text, just note the way the scene looks and flesh it out in words.  Simple, huh?  Neil Gaiman started out his most successful stint in fiction as a comic book writer, and that equipped him to become even better than most, even though he was equally proficient as a short story writer.
Use a Journal and Take Notes:    If you’re stuck for ideas, carry a notebook ( from Field Notes to Moleskines to any other notebook ) everywhere and write down your observations and any idea coming out of the blue.  You’ll get some great lines of dialogue by keeping your ears open on the bus or in cafes, and an unusual phrase may be prompted by something you see or smell.  Daydreaming also lets you put together really nice ideas to jot down in your journal.
Get work done:   For many writers, it is easy to jabber about craft, but actually starting and getting things done is what it is all about.  Finish whatever you start then move on.  This is also Neil Gaiman's primary advice to anyone wanting to get good.  You might want to plan an outline if you are starting a novel so that you have a map of where you are when you are in the middle of everything. Don't stop writing if you have tons of ideas flowing.  Usual volume is 16,000 words for a 10 hour work day or so for really prolific writers like China Mieville.  And he writes Baroque prose stylist, adjectives everywhere stories. Glorious.  You can do less as long as you keep at it and finish the entire story.
Kill your babies:    We are sometimes emotionally attached to particular paragraphs or sentences that sometimes bog down our writing.  Try revising and rewriting that part.  You will see that more often than not, you can write something better, and your story improves overall if you are not stuck up on anything precious other than getting it all right.
Inspirational Podcasts:   Try checking out the  I Should Be Writing podcast  This is a practical and inspiring podcast by female writer, Mur Lafferty. She describes the podcast as “For wanna-be fiction writers, by a wanna-be fiction writer” (though since starting it several years ago, she’s interviewed her favorite authors on the podcast including China Mieville and Neil Gaiman).
creative writing, wattpad, storytelling, good stories, filipino social media, sharing stories, writing tips for beginners, kill your babies, use a journal, write a comic book script, make a comic book, listen to podcasts for inspiration