If anyone tells you that you'll starve as an artist when you choose your career or calling, here are a few inspiring people who have proven that making good art is noble purpose in itself and that making a living out of making good art isn't the crock that snooty corporate hacks or medical care slaves thumb their nose at.  Here's a sampling of the best kids on the block making great art...
Cosplay:  Alodia Gosiengfiao

Alodia herself on her You Tube page showing off a make-up tutorial
to her fans.   All rights reserved to You Tube and Alodia Gosienfiao

If you thought playing dress-up was only for kids during Halloween, you're probably too old or don't now that kids these days can make a living and a career just play-acting movie and cartoon characters in actual authentic themed costumes:

Alodia Gosiengfiao is a Filipino professional cosplayer from Quezon City who is also an Ateneo de Manila, BFA Information Design graduate.  But her true passion is Cosplay and she makes a living as a Cosplay celebrity even as she still does digital design work in between.  She started cosplaying in 2003 at the age of 15 and has cosplayed over 40 anime, video game and movie characters.  As a Cosplay celebrity, she is admired by millions of fans and many smart brands seek her out to endorse their products. 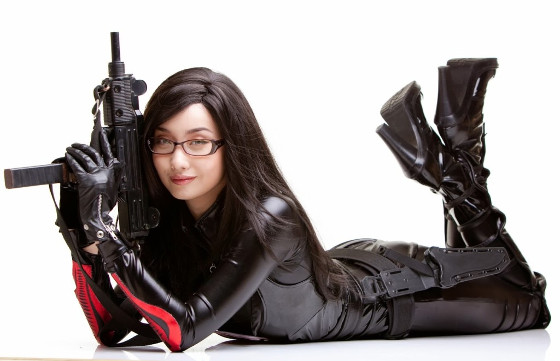 Alodia cosplaying as The Baroness, a character
from cartoon/movie G.I. Joe
Alodia is nicknamed, the "Cosplay Queen" of the Philippines and her success at the craft of 'being-in-character and having great costumes made, has raised the awareness of cosplay as more than just child's play of fooling around.  It has become a cultural phenomenon the world over with many communities of kids of all ages enjoying their favorite characters.

She is no slouch herself as a designer, she has done art commissions for international clients, illustrating both digital and traditional artworks as her 'dayjob.'  Among her other skills, Gosiengfiao is also a pianist, and her only vice is hoarding action figures and ball-jointed dolls, just like any girl you know who could would.
Paper Sculpture:  Yulia Brodskaya

Yulia Brodskaya (Russian: Юлия Бродская), is a breathtaking illustrator known for her elaborate and evocatively detailed paper illustrations.  In 2004 Yulia moved from Moscow to UK where she continued her education at the University of Hertfordshire, graduating with a Master of Art in Graphics Communication degree in 2006. 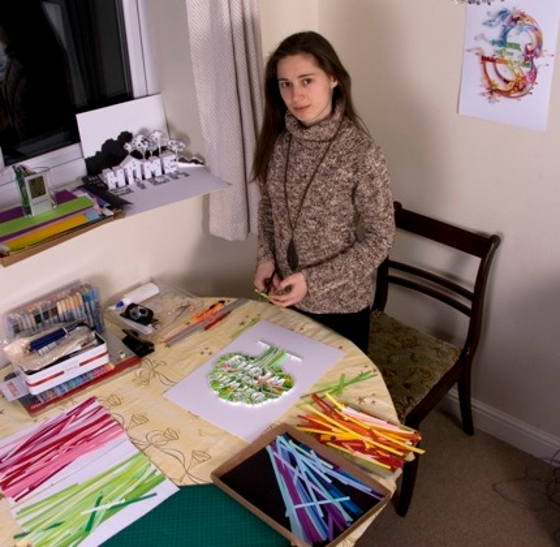 Yulia Broskaya showing off a demo of her papercraft techniques
Image from :http://artatm.com/wp-content/uploads/2010/05/yulia.jpg
Brodskaya quickly switched to illustration after a short stint in graphic design while at university.  Brodskaya’s work uses an old technique called Quilling, in which ribbons of paper are used to create intricate designs.  But Yulia's art exceeds old techniques and creates story paintings or ‘papergrafics’.  Yulia has been doing the rounds talking about Quilling as a paper craft technique that can produce stunning art pieces that tell stories--one of the most important and indelible facets of an illustration focus in her art degree.  She designed one of the Google Chrome themes. 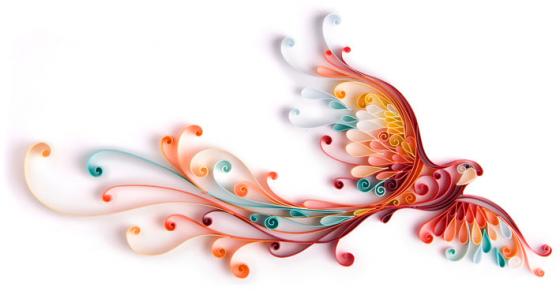 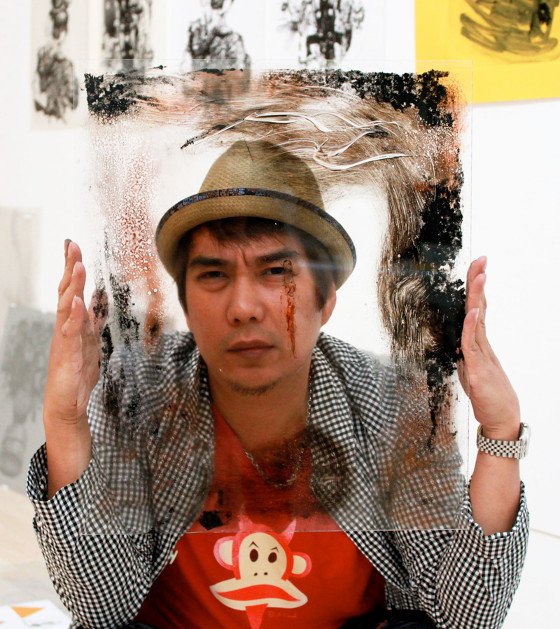 Ronald Ventura is a UST prodigy who has risen above expectations and has become one of the most sought after exhibitors in the Asian contemporary art scene.  His eye for grotesquely beautiful,  layered images and surreal graffiti paintings and sculpture has given him a unique identity among Filipino painters and sculptors.  In his late 30s, Ronald has offered that he doesn't do what you see is what you get, but a more engaging visual experience that draws the reader in and be an immerser in the layers of detail.

Mr. Ventura's "layer of different realities” is a signature theme for all of his surreal paintings, all of which tell stories about past and future social predicaments and conflicts.  While other artists try to  copy old masters' technique or work 'Filipiniana' themes to death, Ventura dares to be his own soul and his art speaks a message no other Filipino painter has achieved, given the rabid response to his gallery every time he is featured in international exhibits. 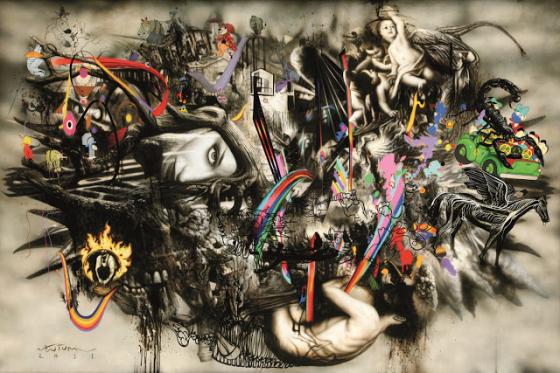 Mr. Ventura admits that he struggled for a while with a day job as a teacher before finding time to put his first collection together.  Best of all, Ventura is not confined to doing what sells.  The UST wizard has explored many mediums of craft: from painting to sculpture.

Not just settling for making 'hanapbuhay' by regurgitating more of what is trending or what sells best--which is often the bane of most local Filipino artists--once art becomes 'hanapbuhay' you become just another photoshop slave for some corporate bane of creative expression. 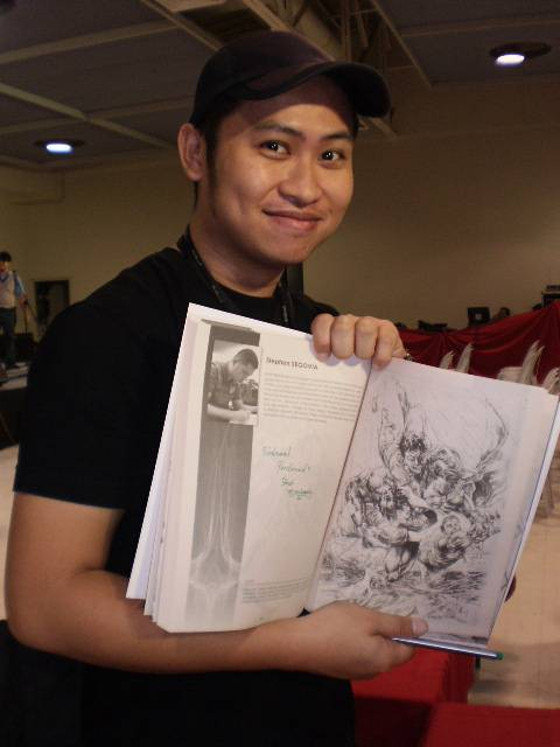 From ComicVine page, Stephen Segovia showing off his awesome pencils

Starting his comic book career as a 16-year-old fledgling replacement for Oliver Page for Tomas and Kulas in Filipino Funny Komiks for P120 a page, Stephen Segovia, now at 32, became the lead penciler/artist for several U.S. superhero comic books from D.C. comics to Marvel.  At the moment, Stephen is now part of their more popular creative teams for the rebooted Valiant Comics. 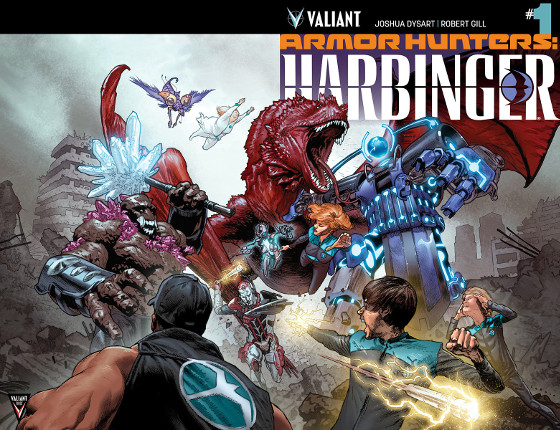 Breaking into U.S. comics is a lifelong dream by many Filipino artists and there are more dreams cut short by circumstances (rotation of creative teams after a 3-year-run cycle, changing to digital lettering AND inking has made dozens of manual letterers jobless, AND current inkers who are still onboard fight to keep their projects and only the best survive) than those who get the luck of the draw.  But this does not in any way detract from the success of Filipino artists like Steven and many other Filipinos from making the grade in one of the most competitive art industries overseas.  If you want it bad enough and you can do wicked art, you can succeed.

If you do decide to have a go at an artistic or creative career, you need to build a portfolio and this is the part that takes time.  It involves a bit of patience (most times called the starving artist mode) in slowly putting your work together.  Show your best work as your portfolio and keep the not-so-best work under wraps as reference and works in progress that can be enhanced when you have time and are more inspired.

You may upload your work to sites like DeviantArt and Tumblr which are also specialist social media networks for artists of all makes and wiseass.   Some people get popular and even get paid commission requests.

Who knows, someone might even offer you commissioned work for good quid.  Be aware that posting online opens your work to getting copied by fans and some more 'enterprising' individuals looking to steal ideas.  If you are okay with this risk and take safeguards to protect your work using watermarks and copyright notices, go ahead and enjoy exposure on the web.

Good news for any talented artist out there is that you can earn good money for your ART and you don’t even need to be an extremely popular professional artist to be successful.  Really!
Make some cute T-Shirt design for your friends they might get interested to order some.

Amanda Palmer's TED talk on getting Crowdfunding for making money.
All Rights Reserved TED and You Tube
Craft is a steady progression of doing the same thing better and better.  Great craftsmanship is its own reward because you can do something few can.  And you can make good art to sell if you master your craft.  Once you get a sizable following, you can even ASK them to pay you (crowdfunding) to make good art like what Amanda Plamer has done in some of her band's projects...check the TED talk above.

Neil Gaiman's commencement speech for the Philadelphia's
graduating class on Making Good Art
All Rights Reserved to You Tube
from an upload by Lennie Alzate
So what are you waiting for?  Grab some colored pens and paper at the next art supply store promo and get going with your projects.  Who knows, you might end up as a modern Michelangelo.  The ninja turtle of course.  With ninja turtle (goofy and amazing) art skills.  No sense in blasphemy.  But you still get to have the time of your life.  Neil Gaiman, that rockstar comic book writer and weird novelist had a moving commencement speech at a Philadelphia school's graduating class and offered the best advice of all:  whatever you do...make good art.
art therapy, painting, writing, drawing, . art classes, art sessions, making a portfolio, retirees making art