The Legendary Shamir: A Reflecting Dish or Stone Crystal that Cut Stone with Sunlight

September 26, 2014 | By: Blessing       Unravelling Mysteries
The Legendary Shamir
The ancient stonemason's worktool
cutting stone with sunlight
Cutting stone by focusing solar radiation is no longer some religious myth as technology has advanced to a level where we can now trace evidence in texts and in artifacts to recognize how it could have been accomplished.

The Shamir is a fabled device that is mentioned in both Arabic legend and Jewish texts. Its use as a stone nmason or 'stonecrafter's tool  can be traced back to the time of Exodus, when the Jews left Egypt.

Accounts of the Shamir being used include the part where God  made Moses write the 10 commandments in two stone tablets and during the Golden age of Israel when Solomon commanded Djinns (demons) and Angels to build the Temple of Israel during his reign as King. 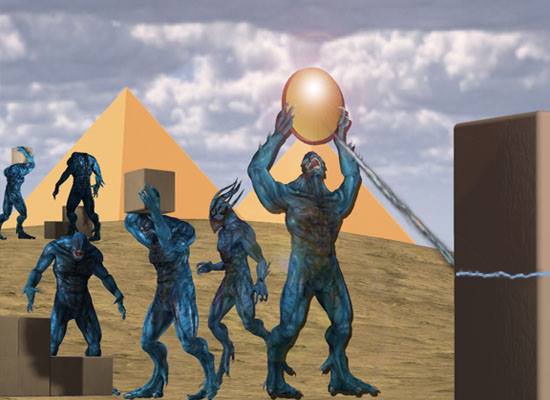 Djinns commanded by King Solomon are said to have helped build the
Temple of Solomon as well as many ancient monuments made up
of igneous stonecraft.

In Scripture, the use of the Shamir enabled Solomon's crew of unearthly workers to build the Lord's Temple of Israel in Jerusalem, following God's instructions that 'no metal tools were to be used:

“For the house, while it was in the building, was built of stone made ready at the quarry; and there was neither hammer nor axe nor any tool of iron heard in the house while it was being built.”

Remember that scribes laid down a record of events according to how they saw it happening and there is no intentional allegorical conceits recorded in Scripture especially the Koran for the Moslems, and the Talmud as handed down to generations of the Jewish faithful.
In the Christian Bible, the Lord admonishes that “….if you make me an altar of stone, you shall not build it of hewn stones; for if you lift up your tool upon it, you have polluted it.”

Solomon built the altar and all the stonework in the temple by having them cut or molded without using any metal tool or instrument.  At that time,  iron tools were linked to the sword, which was a weapon of killing, and maybe even a technology handed down by fallen angels according to the Book of Enoch.  If the altar in the Lord's Temple and the Temple of Israel were to be symbols of peace and life, they were built using a special tool, one that could use light to cut huge stones precisely and melt them into molds and shapes of perfect fit and symmetry depending on the stone crafter's purpose.

In the Quran (Koran), King Sulayman (Solomon) call upon the Djinns from the Samur Mountains to his aid in building the Temple of the Lord.  The Djinns have access to the fabled Shamir stones (samurs), which could cut, shape and polish giant stone blocks in silence using no other tool but light.

Some more clues about the nature of 'Samur' or Shamir device. The tool was said to be a worm, the size of a barley grain and able to cut through anything.  The ‘worm’ as a description might even confuse the best minds, until you consider it as the point of light like some ancient laser device.   How else would an ancient scribe describe it?

A point of light that can focus to the size of a barley grain and cut down and carve or melt the hardest mountain stones into blocks for the Temple of the Lord . The rocks were described again by scribes to split of their own accord as the Shamir ran its light on them, the way a fig fruit opened.

Greek records of Solomon's reign mark the Shamir as a green stone, or a reflector dish made of brass or bronze or any non-gold alloy that would turn green with age. The color of this supposed device is seen on many metal museum pieces that are actually more than just brass or bronze decorative dishes.

Other parts of the Shamir myths include the special storage conditions of this fabled object.

The tool was looked after by the Hoopoe-bird who kept it in a lead box, wrapped in a cloth amongst some barley grains. Only lead could resist the action of the Shamir stone cutter.

This would be a surprise if it were active because lead is easily melted with a dish. The indication that something of a certain size is wrapped in a cloth means the object was NOT the size of a barley grain.  If it were a dish, keeping the Shamir in a sealed box to prevent it from harmful effects when exposed to the sun and reflected sunlight at any particular point would be a wise safety precaution.

Grain would most likely keep moisture out in a sealed box to prevent oxidation of the dish's surface if it were a metal reflector.  If the device was made of an alloy that would mean it could degrade or oxidize badly if exposed to the elements.  The cloth would protect a dish from getting bent out of shape if its container were dropped, like a bubble wrap or styrofoam in today's modern storage boxes for fragile things.

The Talmudic texts tell of a very special too which can cut stone using no energy apart form the sun, cutting through stone without noise, being able to melt it into any desired forms like a potter with clay, and the uncanny fine craftsman's tool for inscribing small gems with any cuts.  The device was used to make all of the fine stonework in antiquity, and these tools leave marks of high heat like lasers, and vitrified surfaces and color changes on the stones as induced by high temperatures.