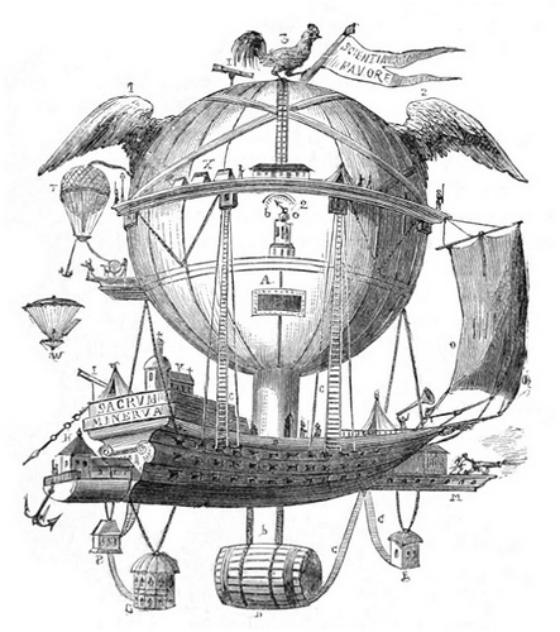 Play is often the best way to learn anything.  A visual and tactile experience helps kids put things together to see how things work.  The process is engaging, fun and seldom bogs down to stressful activities like learning math via flashcards.

Working memory is an important and often overlooked skill.  Recent research has even proved that MENSA scores may not be the true gauge for success for kids or anyone else.  In some recent studies, working memory skills are proven to help kids accomplish more by getting their minds set to tasks and following through on what needs be done. Focus and concentration, patience and maybe some creativity, all assist kids as they develop their working memory skills.

Enter Board Games as Learning Tool

Board games are some of the most excellent teaching aids for almost every learning skill, from basic concepts of math, to learning words and vocabulary, to as ingenious as learning storytelling as a template for more productivity and idea generation for professional design work. Cool huh?

As kids reach the age of 5, they start to learn putting things together by associating them, so simple number, letter, and word knowledge in teach them to discover the world in literacy styled games. From 6 years and older, children may prefer games that help them design play styles, plan strategy and tactics like chess or checkers or even Scrabble.

The better board games allow kids of all ages, to use creative thinking in kids as part of game play. They improve literacy, make math more fun, and secretly hone storytelling skills. Would any kid last through a gruelling 1 hour lecture about multipliers and combinatorial math or sustain a late night to early morning tryst with buddy friends learning the same thing playing paper and dice role playing games with plenty of stat sheets for their characters?

Part of the success of board games at teaching lies in social interaction between players. Many games are family oriented or are tuned for specific tastes: imagine a picture book as a pretty card-based board game , or a war novel as a strategy board game complete with soldier tokens and a huge beautiful map?

As one progresses through a board game, all of your senses are engaged and working memory skills are honed to the max. Instead of sitting through lectures and rote exams, it may soon be that gaming will be the next learning process environment in the near future as well designed games are becoming breakthroughs in what can be accomplished with board game.

Here are some of today's creative and cutting edge board games and card games you might want to check out if you have kids that need help honing working memory in fun and constructive play.

Dixit (recommended age 7+) features 84 cards with beautiful painted art that can be used to teach symbols, description, allegories and storytelling as well as simple ideas like synonyms (words that mean the same idea) and antonyms (words that mean the opposite idea). The simple play involves one player naming one card from his hand as a description (word or phrase) then having players choose a card from their own hidden hands that will match that description. 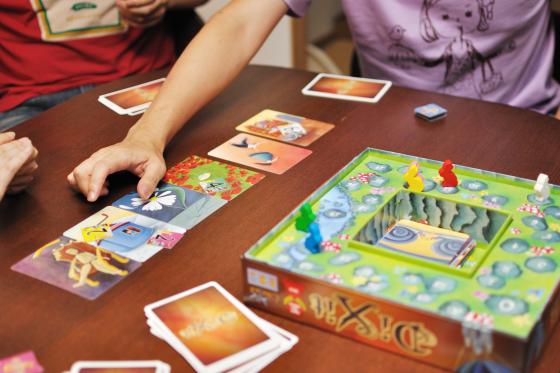 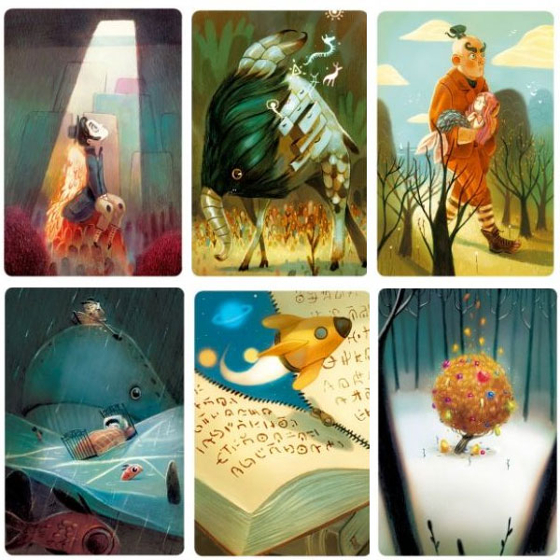 After cards are chosen, players lay them face down on the table and mix them, before turning them up and each trying to guess which card was originally described.  Points are not rewarded if everyone guesses the right card or if everyone guesses wrong, so the trick is in choosing your descriptions wisely to not be too obvious or not to be too murky about naming your picture card.  Dix-It helps kids think either inside the box, or out of the box as creative inspiration AND it improves their working memory skills.  Language skills like finding synonymous imagery or the opposite helps kids visualize concepts, symbols and even entire stories just off the cards. 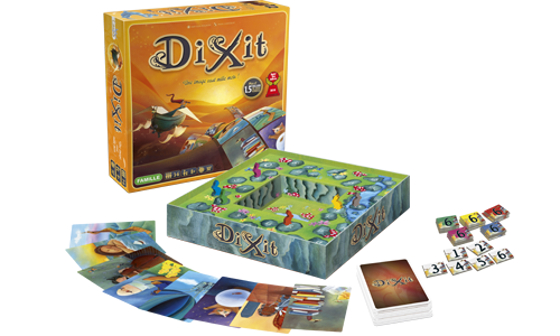 Dix-it is a game that helps kids visualize and focus on creative play:
thinking of metaphors is one way to improve working memory skills.

Once Upon A Time (recommended age is 7+) is a storytelling game for kids where players construct a fairy tale styled story using cards with images with descriptions symbolizing plots, actions, and a choice of endings. Like a storyboard panel, the player lays cards down as he narrates his story, with opportunities by other players during a turn to take over the story with 'interruption cards. 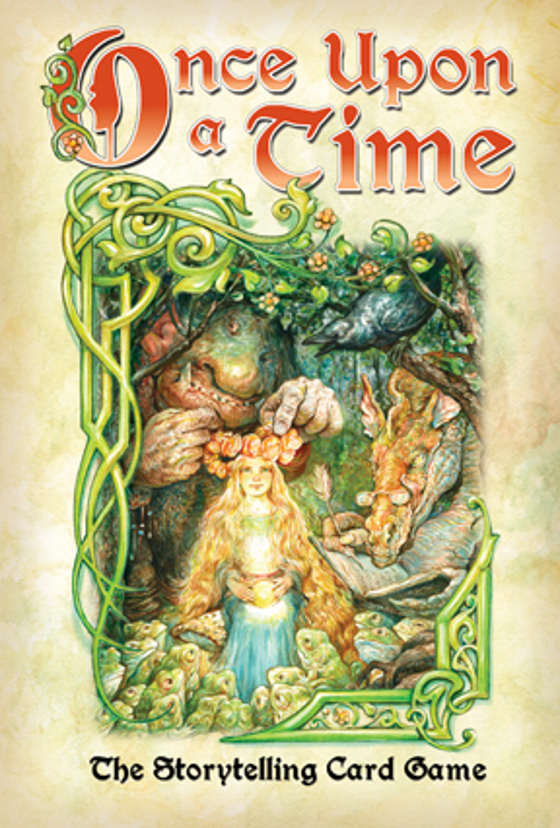 The box cover to The Storytelling Card Game.  Players try to maneuver
the game into a particular ending.  The game itself helps kids keep
track of events and characters as cards which aids them in their
reading skills as well as their writing skills.

The game cards are themed with images of queens, curses and fairies. Some kids might be confused with the baroque an archaic language used in the game, as is the format of most fairy tales, but having a dictionary or a helpful older person assist in describing the language will help the kids enjoy the game more.  For honing word skills and for storytelling skills that may help one's writing and language skills, this game provides a structure for kids to figure out how things proceed from one event to another.  Like putting together  sentence, then a string of them.  Working memory is engaged in fun and constructive play.

Magic the Gathering Commander and Planechase (recommended age is 13 and above, features 100 cards per deck for the Commander playdeck) This is a cult favorite card game that takes advantage of players' personal playing styles and is a spin-off from the regular format one-on-one game. MtG Commander is a multi-player card game that allows kids to build decks using a singleton deck build (one copy of one card in a deck, 100 cards in total, including the general or 'hero' card) and play against each other as 3 player groups up to 8 players or more.

Playing the regular format game of 60 cards is a one-on-one game that hones play skills and in-game thinking tactics enough for the player to move on to Commander.  The Planechase cards are an additional game mechanic that changes the flavor or environment of each round for as long as the Planechase card is in play--environments can be changed by a dice roll to cycle through the stack of Planechase cards to put another flavor mechanic in play" 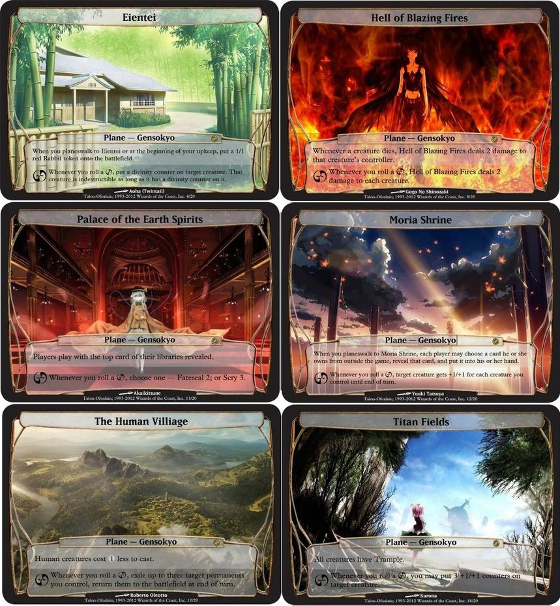 Planechase cards add more fun to an existing multi-player game
of Magic the Gathering: Commander.  Like saying for this round
your zombies deal more damage or makes it easier
to play certain cards.

One can reference real time strategy games like Blizzard's Warcraft DOTA where one has a hero with spells and equipment and troops in a 'capture the flag mission' as similar in spirit with Mtg Commander. The player builds a 99 card deck around his commander and puts in cards (equipment, spells, enchantments) that can help him win against other players, each starting the game with 40 life points, in a free-for-all gaming session that involves players egging and cajoling each other in player politics to attack the other and reduce their life points to zero.   A middle-school teacher in Kansas was even featured on the GatheringMagic site showing how MTG can be used as a learning tool in the classroom.

The learning curve for Magic is rather steep, even for just the regular format 60 card decks, and the card stock dates back to 1994, so that gives players a huge library from which to choose their weapons for Commander. Magic is one example of how combinatorial math was used to create a card game, that is made even more engaging by the fantasy themes.  The combination math elements helps kids playing more complex and interactive arithmetic skills as well as resource management because the format utilizes only one of each card.  The trick to enjoy the game is not to run out of solutions (cards with game effects) in your play deck.  The math learning becomes enjoyable and even an engaging experience for Commander players.

Part of honing working memory skills for learning math is to keep track of numbers in various combinations--Mathematician Richard Garfield designed Magic the Gathering so that cards would be engaging as a numbers game and involve a thematic story for each game one plays.  One has to keep track of his life number, count how much damage he can punch through, and there are other sublte math involved such as card advantage via hand or graveyard or in play on the board.  Working memory skills are used to the max when one plays this fan favorite card game.

You still want to learn math via Flash Cards or by playing Magic? 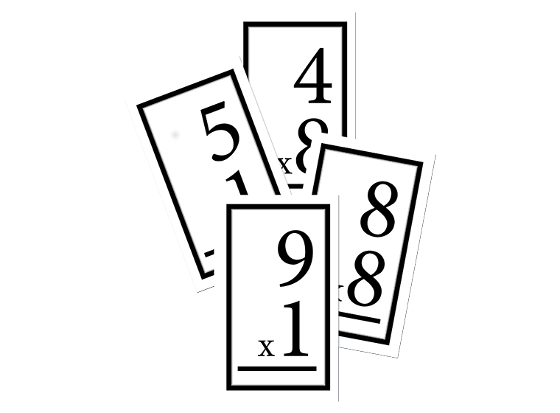