March 9, 2016       Green-Minded
Genetically Modified Organisms (GMO)
as Food is a  Danger
to Everyone
Industrial Agriculture and everything it represents has been proven to be THE WORST way to create a sustainable food supply and keep rural farming communities productive and rewarded.

The saddest realization for everyone in our country is that the most hated GMO conglomerate (Monsanto) in the world has taken root and has even penetrated local print media and local TV with their crusade for local farmers to convert to industrial biotech farming as the only possible solution to the Philippines future agriculture needs.  GMO anyone? 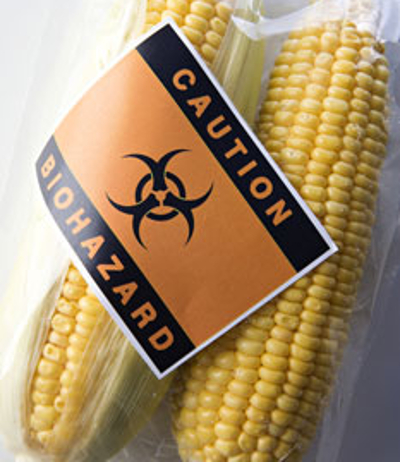 Biotech corn is nothing more than GMO corn
disguised  with a different scientific description.

What Are the Dangers of GMO Farming?

Genetically modified organisms have been proven to create massive health problems in both animal and human populations while rendering barren the earth where these GMO / biotech plants are farmed.  Chemical inputs into the farm soil over time deplete the soil of its natural nutrients and kill its ability to regenerate itself given normal organic farming methods.  Farmers end up with barren fields over time.  The tampering with food DNA creates unnatural poisons in GMO / biotech food that may stop pests from destroying crops by melting their insect stomachs, but any unnatural tampering in food DNA has already been tested to cause cancer or worse in lab rats and birth defects in humans as well as other serious health problems. 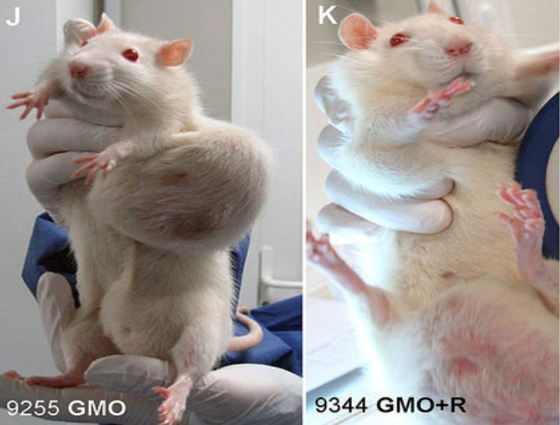 GMO food may be the cause of massive health problems in the U.S.  In South America where the first GMO experiments were made, cows and pigs eating GMO feeds had their stomachs turn to mush.  Even crows won't eat anything from a GMO planted field because they know the crop is poison.  GMO crops are designed with certain genes built in that automatically kill or render infertile common crop pests but it the same gene tampering that causes the biotech food crop to be extremely dangerous and even poisonous to both animals and humans over the long run. 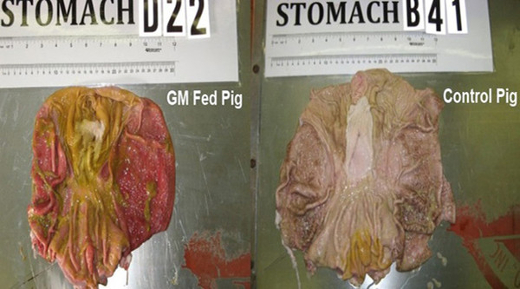 An image circulated by anti-GMO crusaders showing what
happens to animals that eat GMO feeds.
Fraudulent Economics with GMO Contracts

When buying biotech seed or GMO seed, Farmers are not allowed to keep any seed after harvest.  The plants themselves are designed with so-called 'terminator genes' that kill off its own seed producing ability, so crops from one batch of seeds bought from the GMO seed provider are for one harvest only.  Farmers have to pay extra to get more seed to plant for the next planting season.

In South American cases if you buy seeds from a GMO company, they ask you to sign a contract that makes you criminally liable if you SAVE seed from a harvest.  That's just the tip of fraudulent conditions of working with a GMO company.  Because GMO has received plenty of media coverage documenting all of the nasty things gong for it, including the industrial agriculture giant effecting criminal activity like having farmers shot or litigated for showing evidence of GMO crops' deadly biological effects of farm animals and on humans, they have dressed up their campaign in the Philippines with a new branding, calling their tech and services as biotech agriculture--which is essentially the same thing as GMO technology. 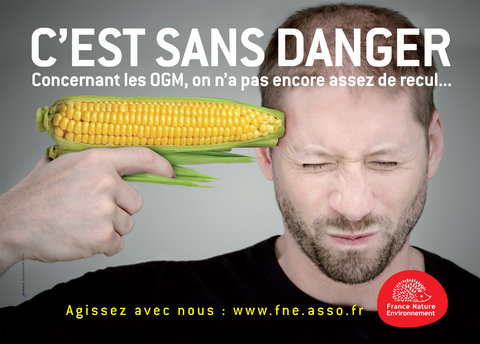 One of France's awareness campaigns against GMO foods.
At a time when first world nations like France and the Czech Republic are banning GMO outright from their supermarkets, food supply grids and from agricultural use, the Philippines may be the only country in Southeast Asia that has allowed a very powerful, giant industrial agriculture biotech company to set roots locally and infiltrate the local media with PR and carefully planted stories that extol and hail biotech farming as the only viable solution for a sustainable local food supply and agriculture industry.

This GMO giant has been known to bribe government officials and pay off shady journalists to do PR and protect its business interests in the U.S. and worldwide.  No one in local Filipino print media and TV so far will call them out for what they are all about.  Be wary of what food you put on the table.  It goes by the name: biotech corn and golden rice.  Better pay an organic farmer P45 for a bag of tomatoes than pay thousands for cancer treatment or tumor removal.  Worse becomes birth defects if you consume processed foods packed with GMO food ingredients.
green minded, genetically modified organisms, biotech agriculture, industrial agriculture, gmo, health problems, cancer, terminator gene, pests won't eat gmo,