September 22, 2017       Arts and Culture
Mother!  A Bizarro Tale
of Gaea & Lurv
Darren Aronofsky's seeming urban-folk-horror film, Mother! was pushed by Paramount as some kind of haunted house spooky with evil visitors from hell.  And it actually turns into a very surreal and even bizarro tale of siege and unrequited lurv.  Not haunted house.  Just spooky visitors from hell.  Some evil.  Duh? Exactly.   Plus a trailer soundtrack that reminds me of the 70s B-movie horror flick, Mutation.  It is getting close to Halloween, and it is just after Chinese Ghost month so get your horror fix with this unforgettable horror film and figure out what went on--maybe after watching it a couple more times. 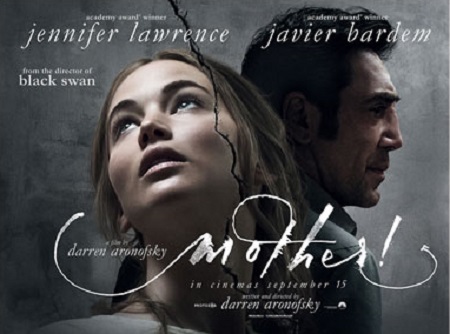 Mother! has received awful movie reviews from most American moviegoers and even media critics, precisely because they were expecting HORROR with all caps, an entirely different film from the sneak peak trailers. They saw stuff that might have been what they were expecting during most of the first half of the film:  Creepy strangers visiting a young wife and her older husband (Javier Bardem), blood outlining a hidden door in the basement, people bearing torches converging on the home of the couple. Viewers were expecting something really creepy to eventually show itself from under the basement. The camera following the woman-victim-to-be, (Jennifer Lawrence) around the house, with surprises popping up that didn't really make sense.  For the expectant horror movie fan, everything goes to hell by the last third of the movie in such an onslaught that it bulldozers past one's senses and horror movie fix cravings that you sit there wondering where all that came from.  Cool.
While watching Mother! you half-the-time expect the house to be haunted with all the red herrings going on about something hiding in the basement.  Jennifer Lawrence as the artist-in-residence homemaker and wife of Javier Bardem, also senses something eerie behind the walls of the house--like an embryo or some unformed living thing that is slowly coalescing.

Complete strangers like Ed Harris and others, one by one, come out of nowhere to pay her poet-writer husband a visit.  Then inexplicably stay over for the night.  Lawrence catches her husband helping out Ed Harris vomit into the toiler and cover up a wound on the old man's side (the proverbial rib from which Eve comes from), then the next day, Michelle Pfeiffer knocks on the door to pay her husband a visit and stays over too.  Their two sons follow, inexplicably brawl in the home over some family feud then one of them gets his head bashed on the floor, and the rest of the gang rush him to the hospital leaving Jennifer Lawrence all alone in the home.
Personally. I was expecting something like Wickerman or Under the Skin (Scarlet Johansson): you know, some unknown coven in a community going to sacrifice the woman to the house as a living demon or anything along those lines, then the last third of the movie hits and all the Jesus allegories are played out by the director to give us a very big, in-your face, hint-wink-wink, where the story is actually going.  By the end of the movie, the God Schtick-black comedy does a good job of throwing every one in a loop, and not everyone likes that surprise.  Especially non art film movie types who just want their woo-woo movie with any kind of supernatural spook action.  There is actually plenty of supernatural things in Mother!  which throw off everyone who do not see through the God Schtick already.
All the time, we were still looking at the movie as some secret anarchist poet who may be the anti-Christ get some really bizarre shit going on with his beautiful macabre writings turning people nuts bizarro (you know, DeathNote and variations of it make good story too) and suddenly devouring a baby like it were meatloaf.  Then, more weird cult like gatherings in the house of husband and wife until wifer gets so miffed, she swings glass shards at the unwelcome visitors, jumps into the basement then uses a lighter with a rune embossed on it to light up the oil/gas hidden in the walled-up basement room to blow up the entire home to infernokrusher.

Then, the big movie reveal, Lawrence's smoldering corpse is carried to a bed-altar, while Bardem the husband asks for her unrequitted love, and she does, reluctantly, but with unswerving resolve--making her poet husband claw her encrusted heart out of its ensconce and remove a diamond crystal, heart-shape, to replace the one lost, onto the mantel of his study.  This reboots the entire home back into the quantum state we see at the beginning of the movie with Lawrence waking up to an empty bed looking for "baby?"  At the credits, the poet is named Him, while Jennifer Lawrence is mother! of the movie.  Get the story yet?
Although as a Catholic Christian reviewing the movie, I find any story character allegory of God that depicts Him as fickle or even remotely foolishly fathomable as a husband-next-door, falls flat on its face by the sheer lameness of the making God more human conceit--this Euro-surreal treatment of a horror story, masquerading with all sorts of weird, half-baked haunted house insinuations with neighbors from Hell to boot, completely delivers its story pay-off: rocking your socks off.  This should be the horror movie that you should watch for this year.

It might either feel like a rip off, if you pay for the big theater experience.  Or it will rip your heart out as one of the most enjoyable story-for-story's telling kind of movie.  You can even figure out all sorts of different allegories for what you want to see in Mother!

Regular Pinoy horror-movie fans may be totally put off by the strange turn of events or by the unabashed pseudo-Christian allegory and imagery, instead of spooks and witch covens.  There will be Filipino, horror-as-art-film fans who may even spout their own cheesy-intellectual out-think-you, glib about what the movie means for them. 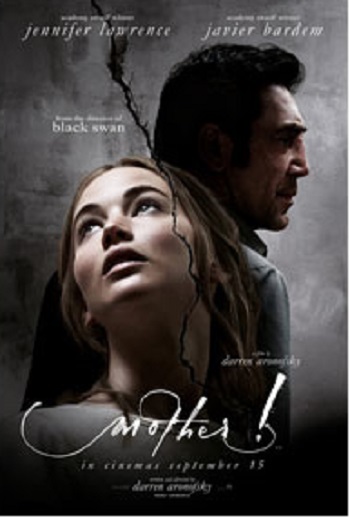 Maybe that's what the payoff really is.

For me, it is a fairy tale ending that allows both Him and Mother! to find both themselves together and start afresh when everything is seemingy lost.  All, while showing us the Heart of Gaea, one very strange and weird artefact grown from Lawrence's own heart.  One that can turn back time, with LURV.  And lots of curve balls thrown at the horror flick aficionado.