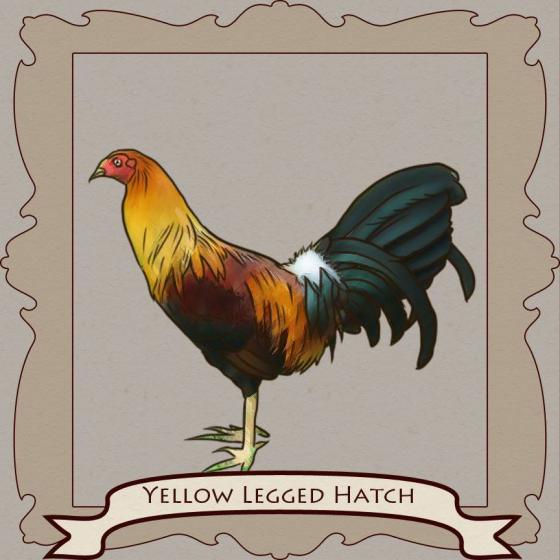 One of the most popular of the Hatch family for its proven winning ways.  The YLH is 100% yellow legged, it is 70% straight combed and 30% pea combed, with light red feathers and is black breasted.

The Yellow Leg Hatch is a cross between the already proven line of Blueface Hatch of renown breeder Sandy Hatch, Whitehackle and Boston Roundhead for one truly murderous gamefowl.

These gamecocks are deadly cutters, have deep game and possess very powerful legs and has good endurance for drag fights.  Side steping or weaving is one of the defensive tactics of smart gamefowl. It provides the gamefowl a way to avoid a deathblow while setting up one of its own counter attacks for the win. A side step disorients an attacking opponent for just that split second, the weaving rooster always aware of where the attacker is, while the rooster that commits to the attack loses its target and has to attack again, but is open to attack itself if it cannot reorient itself in time.  Some cockers prefer this kind of rooster smarts when breeding fighters.
Until our next Gamefowl feature, keep checking
REACH-UNLIMITED.COM's section,
GAMEFOWL CIRCUIT for the latest and
the most interesting reading on the
Filipino's favorite sport.