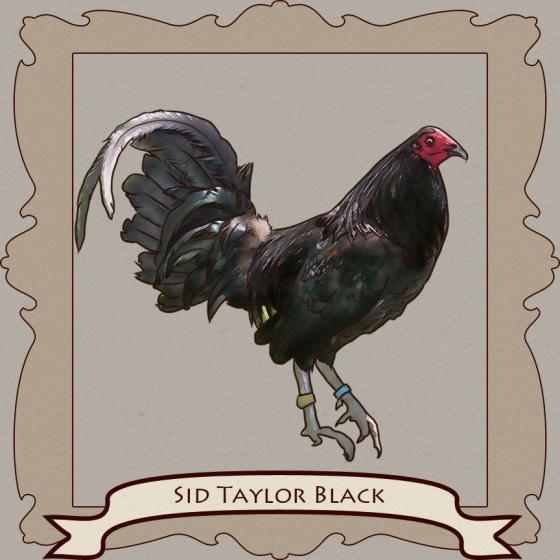 The original strain of chickens from which the Sid Taylors of today were made are traced back to the Civil War of 1861.  A cocker by the name of Jim Shy of Lexington, Kentucky, his name has also been spelled as Shigh and Shei, in old copies of horse betting journal accounts as he was a horse racer.

Shy lived near the racetrack at Lexington and raised his chickens on the farm of Jim Price, who lived near Pinegrove, Kentucky.  Price was interested in all kinds of sporting events and he backed Shy's cocks heavily in Lexington derbies and main cocking events very successfully.  The gamefowl have red, and brown-red, pyle and blue-reds, many of them having white feathers in their tails and wings.  Soon after the war of the 1860s, Sid Taylor got the chickens from Mr. Shy when his eyesight began to fail.

The first cross that Sid Taylor made with the Shy chickens was in the early seventies. In 1869 George Cadwallader, a horse jockey and a race horse trainer, sold a horse for $15,000, and was also provided six black imported Irish hens as added payment.

Of these six Irish hens, Mr. Taylor put a blue cock that came from Shy. No one knows the proportion of this blood Mr. Taylor infused into his chickens, but with them he succeeded in winning the respect of Tom O'Neal, a great Dom breeder and cocker of Louisville in the main fights he competed in.  Tom O'Neal was associated with Waddle, who controlled most of the gambling houses in Louisville at the time and Sid Taylor furnished a great many cocks to O'Neal and Wadle.

Mr. W. Pragnoff, of Louisville, Ky and Waddle imported from Vinegar Hill, Ireland, some game chickens. These chickens were called the Waddle Irish. They had black eyes and dark or mulberry colored faces. The hens were black, the cocks very dark Brown Reds around 1880.
The Origin of the Log Cabins, the Brown Red family, Mr. Gay bred for himself. In 1912 Mr. Gay fought a Brown Red stag from the red family that he like so much that he bred to him and continued to breed him until 1920, when he died.

This cock was kept at a log cabin on the farm so the bloodline is called Log Cabins.  The Sid Taylors are purely a Kentucky product, the foundation stock being the old Shy chickens.

Mr. Taylor crosse his Shy gamefowl with the imported Irish blood from Hudderson in the early seventies.  In the early eighties, Mr. Taylor again crossed in Irish fighting fowl named the Waddle Irish. These two infusions of imported Irish blood into the Shy chickens made all the families of the Sid Taylors, except the Dom family, which was crossed with O'Neal Dom blood around 1870.

After these crosses, no other bloodline was infused into the Blacks by Mr. Taylor for over 40 years. The Sid Taylors are now classed as a pure and distinct strain of Black gamefowl and for over 40 years they had been in the hands of only two men, their originators, Mr. Sid Taylor and Mr. J.D. Gay.

The Sid Taylor Black, like all Blacks are known for their speed and cutting, a possible genetic enhancement as an original Brown Red strain bred into Black hens.  The green and white legged Blacks fight as multiple hitting flyers or grounders, while the black legged ones are known as stylish cutters that can hit anywhere with offbeat timing that hits the mark more often than not.  The  Sid Taylor Black also fight as vertical cutting flyers, flying straight up rather than at an angle then waiting for the other chicken to fly into the knife as it rises to meet the Black.