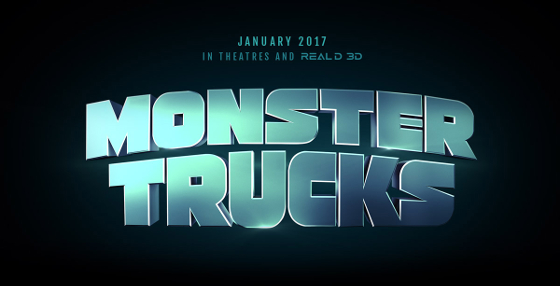 Like good ole' Amblin movies like E.T. or 8mm, Monster Trucks is one of those creature movies where never-before-seen monster and kid fall in love with each other and the kid gets his girl while pulling the rug from under some nefarious, blundering evil corporation plotting to make money off his pet creature.

In the spirit of Muscle Machines, we look at this movie as an inspiring film for kids to dream big, work hard, and learn to be smart with machines so they can fix stuff, repair good machines instead of buying new (and having your vehicle repossessed if you can't pay for it), and trust in true friends more than in double-speak corporate institutions that covertly oppress but actually feed off every goaded dupe to keep doing shady business.


Video Credit:  Paramount Pictures (Paramount Animation)  fair use
Official Trailer of the Monster Trucks movie.
The Monster Trucks movie was actually conceptualized by the 4-year-old son of Paramount Animation's head Adam Goodman in July of 2013--having a real monster inside a Monster Truck-type pick-up.  Treated as a high-concept idea for an animation movie, Paramount put together the CGI creature movie with screenplay by Derek Connolly, who also wrote Jurassic World and Safety Not Guaranteed, and the upcoming Star Wars: Episode 9.  Movie media has blitzed Paramount for delying the screening for a year and for writing it off its books for $115 million, but things may turn around sooner to everyone's surprise.

Spoiler alert:  A boy, Tripp Coley who is being tutored by a smart girl in biology because he is flunking, is a nightshift junkyard mechanic who is putting together his own hot-rod truck off spare parts in the scrap junkyard before he bumps into a strange subterranean, oil and gasoline slurping creature that becomes his lifelong buddy.  Not far off, an oil company was drilling into an oil pocket with a subterranean water feature above it.  Inside that underground maze lived crude oil-drinking creatures, like water luminescent octopi, (that are probably also silicon based creatures for their toughness and their subsistence on crude oil for food).  A family of these creatures pop into the surface after the Evil corporation's deep earth drill explodes from the water pressure miscalculation and the villains capture two of the monsters Creech's mom and dad, but lose their son whom Tripp befriends after a brief and hostile introduction. 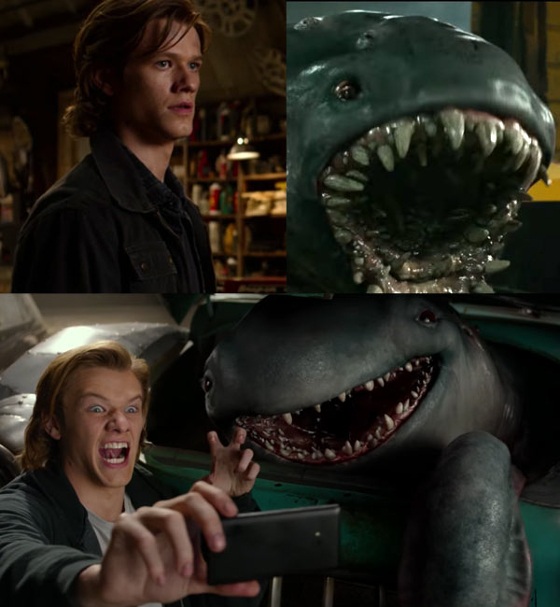 Image Credit:  Paramount Pictures
Scenes from the Monster Trucks movie--Creech and Tripp having a
selfie after Creech learns how to "drive" the DIY truck.

Tripp calls his monster Creech and it "learns" how to use its tentacle nodules (cilla) to grind the axles of his Monster Truck wheels with enough torque to function like a living, hot rod engine.  The hi-jinks adventure and truck chase scenes that follow are cute.  This includes rigging two armored truck pick-up-SUVs to retrofit Creech's captive parents, whom Tripp and friends spring out of containment from the Evil corporation's warehouse.  Tripp and Scooby friends plus new geek girlfriend, Meredith, "drive" the Monster Trucks, while being chased by armored trucks of the Evil corporation, back to a mountain top with a hidden ravine showing access to an underground water pool: to return the monster family back to their native habitat.  The monster hive greets Tripp as he revives, and Creech has a final rub-your-noggin farewell with his best friend, Tripp.  With a final rock anthem-power ballad ending the movie, there are cut scenes of Tripp finally building his dream, scrap-metal, Monster Truck and rideing off into the sunset with Meredith.  End Spoiler.

Expect a sequel if any outfit is smart enough to buy this franchise for a what it's worth--which is plenty (never underestimate the long-tail wisdom of 4-year-olds)--think of tank bikes, monster trains, or even monster driven steampunk propeller planes.  The idea is a franchise.

Monster Trucks themselves have been a cultural icon in the U.S. with arena shows and the so called pick-up truck rigs with giant wheels as the stars of a dirt-road obstacle course.  With names like Big-Foot, Inferno and Krusher--the feeding frenzy branding of the Monster Truck cultural phenomena has even influenced some literary fans to adapt a similar naming strategy for future science fiction--Infernokrusher instead of boring, irrecognizable descriptions like Slipstream.

Delayed for a year and having a January screening, Monster Trucks didn't get the chance to be an under-the-radar, summer blockbuster choice, kids would opt for if pitted against overproduced and cheesy, superhero movies, so its box office take is as slow as expected--only grossing $46.7 million as of this writing.

Still the movie works as a popcorn guy-movie or boy fantasy, where you just want to sit back and enjoy a coming-of-age adventure story.  If you grew up on old Steven Spielberg creature pet movies like E.T. or Gremlins (produced by Spielberg) or something as recent as Super 8 (under J.J. Abrams), you will love Monster Trucks.  If you like armored vehicles and monsters inside them, Monster Trucks should be among your desert island Blu-Ray collection.  Don't believe the killjoy trolls and media gurus who thumb their noses at the Old Ones powering Monster Trucks.  Watch the movie for yourself while its still on in theaters.
muscle machines, monster movies, paramount, kids coming of age, creature movie, creech, monster trucks, cultural icon