February 10, 2017       Tech Buzz
Sandstorm Cloud OS
Opportunity for picking up open source
cloud goldmine or doom for open
source business?
The Sandstorm Oasis developer just sent an email to users of its service that they were ceasing to continue their business as a proprietary, yet open source product.  The business owners are moving all Sandstorm Cloud OS development into free open source community mode.  Even sharing and divulging their trade secrets for tooling and configuring so that the community already started may continue to support the Sandstorm Cloud OS--with private individuals or groups pooling their resources and time to use and improve apps and plug-ins.

What does this have to do with software and Cloud technology at large for groups that use computers to communicate and share data?  It's both a missed opportunity and a huge opportunity at the same time for open source Cloud OS app ecosystems that can rival Windows and other work group productivity suites and apps. 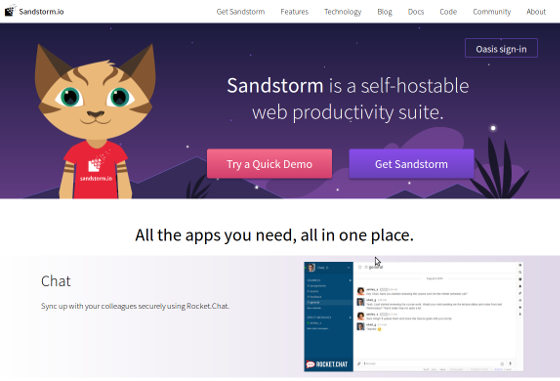 When all software and app makers are going Cloud OS-DRM access for their flagship office productivity products, Sandstorm offered a free to use Cloud OS with native apps and an open source environment for developers to plug in their own (open source or proprietary) apps.  Dev coders and app techs can use Sandstorm like their own Windows-like OS platform for making apps in the same way that open source coders create apps for Android or any PC-based Linux Distro.

Evernote and Slack are examples of branded work productivity apps that are Cloud-based, the former offering note-taking and web-clipping functions while the other offering a group chat-conferencing service that functions better than email because work groups go live whenever they can communicate.  Sandstorm was offering apps like note-taking, web clipping and even standard office productivity tools like a word processor, text editor, spreadsheet app, slideshow app and more. 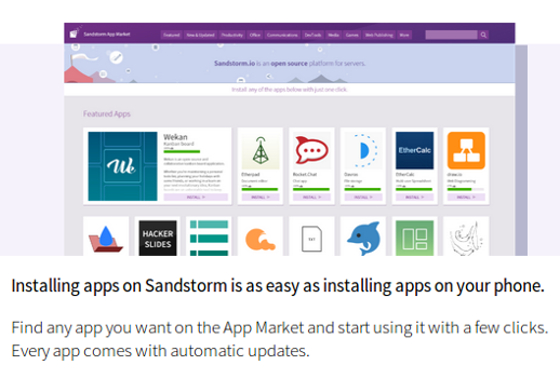 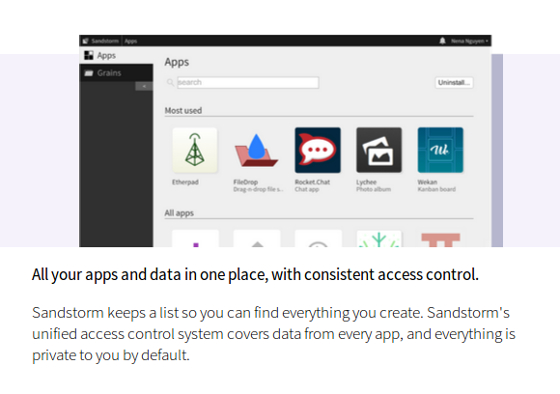 Supporting the Open Source Cloud:  Sandstorm in the Future

Sandstorm can run on most Linux distros as a standalone cloud app for office work groups or can be installed in your own company office servers as an intra-net cloud OS with work group and individual apps.  It is the latter part that used to be the unique selling point of the Cloud OS, because workgroup software is hugely expensive for licenses for each PC that uses it, an intra-net, open source Cloud OS with native and developer apps that match productivity of branded software should be way cheaper and should be backward compatible even with older technology or PCs.  A secure intra-company Cloud that runs on free open source software is the only way for Cloud to work for everyone.

A huge investment in branded Cloud DRM controlled app environments is too risky especially if the company that publishes or runs the Cloud suddenly goes under or if they upgrade versions of their Cloud apps and you wish to end your subscription--you lose everything.  It's as if you were just renting software and not even actually physically owning it in spite of all the costs.

Because the Sandstorm team focused too much on product dev and creating user communities, they forgot the business side and run out of funding, but thanks to the community mindset of open source developers, they were generous enough to offer and re-prioritize all their work as open source with no proprietary constraints.  This means investing into Sandstorm and its development will not only be a wise move for any work group and business needing Cloud-based computing apps but for the community of open source to remain robust, and as good as branded stuff, keeping efforts like Sandstorm's Cloud community and intra-net downloadable service a continuing and rewarding venture is a no-brainer.  It's a good tech investment if you were looking for a very good cause to fund where you get plenty out of it.  Remember, you can still offer your own proprietary apps for sale on their Cloud OS ecosystem if you want to make money.

According to Wired, there is still a security problem if Sandstorm is offered by any hosting service that will, unknown to its users, collect or read your data, sell it to marketers, or hand it to the government without telling you.  But all of these will only be a worry for users of Sandstorm hosted on another entity or brand--not if you as an individual use it yourself, hosted on your own servers.  Businesses and work groups that want to keep their Cloud data intra-net can use Sandstorm as its in-house office productivity suite and can even control access to apps per workstation.

Overall, even as we are saddened that another great Cloud product is moving on after failing to secure additional funding to keep it afloat as a business, the direction it is moving may be for the better of Cloud ecosystems for the future.  The Sandstorm community should have plenty of tinkers who will want to have a shot at making the Cloud OS service sing like a song for all its users.  Open source is the future.