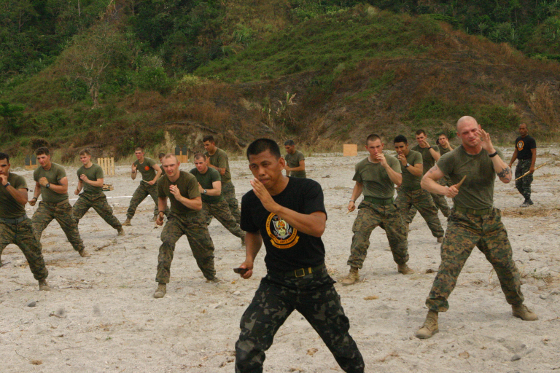 In the tragic Mamasapano massacre, where two Indonesian terrorists were targeted by Philippine Special Action Force policemen for extraction, one survivor of the debacle was able to save his life from terrorist bandits attempting to overwhelm him to steal his gun weapon, by using a much venerated Filipino fighting technique.
Using a survival knife, the SAF policeman took down 9 bandit assailants who thought they could take down the beleaguered law enforcer and manhandle him with superior numbers.

Kali knife fighting is a special survival martial arts that is exclusively taught to special forces groups of the Philippine law enforcement agencies and our own Military soldiers.  It is a fighting technique that works around the blade system.

The Philippine Armed Forces teaching Allied U.S. troops in a
joint exercise activity how Kali knife fighting works as self-defense
and as an offensive blade system for armed combat.

All rights reserved to AirSource Military Videos and You Tube

The philosophy behind blade fighting system is that you disable a threat by inflicting a lethal wound that will stop the aggressor who is intent on doing you or your family harm.

Soldiers and special forces units do not draw a blade to disable an opponent because this gives the enemy a chance to counterattack and still harm them.  If a blade is drawn in a fight for any reason, it will be used to kill the enemy with EVERY move.  Any other way would be a waste of energy and time if in a violent situation where saving lives is at stake.

Blade systems teach the martial artist to take the offensive.  Their mindset is fixed in training to seek lethal force on the enemy.  A blade system does not just train how to defend against a knife wielding assailant, but how to kill that assailant as quickly as you can.  Some Kali fighting schools offer that if defense is the primary focus of a blade system, it is a waste of training and energy.  Some Kali schools teach immobilization methods by cutting tendons to disable an arm and even wrist locks in a potential confrontation.  This may not completely neutralize a lethal threat and even let your guard down if you accomplish a lock or disable an opponent's limbs.  Although these fight methods may be taught if a target is to be captured alive.

Kali knife fighting techniques teach defense by going on the offensive.  When using a knife for self defense, the attacking side of a blade fight is taught: non-linear angles, hand switches, lines of cutting, half-beat attacks; all of these so that the attacker himself would recognize parry techniques and counter attacks to defend himself.  A person armed with a bladed weapon is never hesitant to use a drawn knife for lethal combat, to kill the enemy the fastest way without getting injured.

For civilian self defense, one CANNOT initiate the same mindset because the law penalizes the killer unless certain circumstances are in play where there is no other recourse but to take the life of an assailant with your self-defense weapon to save your own life or the life of a loved one in danger.  This is why self-defense schools allow parrying techniques for civilian trained Kali martial artist.  But for military special forces, offensive methods are the techniques trained.

The angle of attack is different for sticks and with blades. Stick fighters aim for bony body parts to inflict the most damage: hand knuckles, elbows, the jaw, shoulders and the sides of the temple.  Kali blade fighters aim for vital targets that will bleed the opponent to death: the neck area with carotid arteries, the thigh area with femoral arteries, the space above your stomach to stab into the heart for the abdominal aorta.

Filipino Martial Arts has become standard weapons training for close
quarters combat among the worlds' Special Forces troops because
it has consistently shown effectiveness in life or death situations.
Some of today's Kali fighting school masters explain why.

This video is all rights reserved to
Funker Tactical - Gun & Gear Videos and You Tube.

Sticks are wielded in a slashing attack and a powerful hit is essential.  Blades attacks do not require as much forceful effort, but speed and pinpoint accurate targeting is the focus.  Blade slashes do not stop an opponent cold except for few key targets in the human body.  Blade slash wounds may look horrific but are mostly superficial and cutting attacks should only be part of a blade fighting system and not its primary attack component.

Blade thrusts and a good knowledge of the human anatomy enable Kali trained soldiers to defend themselves better in hand to hand survival combat, even when outnumbered by overconfident enemies.

Slash attacks are only part of the Kali knife fighting system. Using knowledge and understanding of human anatomy special forces soldiers know where a slash will work vs. a thrust. Targets that are more superficial on the human body such as the carotid artery would be appropriate to slash for lethal entry.  Fighting with a blade is not trained as movement patterns similar to traditional martial arts.  A knife fighter is a thinking fighter, looking at his opponent's weak points in real time for the killing blow.  Knife fighters do not even lock or take down an opponent manually before striking with the blade.  A special forces soldier trained in a blade system always leads with the blade to maim and kill.

Off Grid Self Defense

It is possible for a civilian to train in a Kali fighting school for blade fighting systems.  Since acquiring a gun is cost prohibitive for the average citizen, knowing how to fight using the traditional Filipino knife fighting martial arts can give someone an edge in armed conflict, when defending his home against more then one assailant.

Of course, someone training in any blade system should only use a blade in an extreme situation.

Robbers breaking into his home, or some looters trying to steal his household's food supply.  All of this scenarios may readily happen when law and order break down when the supply and power grid are indefinitely cut off.

A cliche about apocalypse scenarios goes:  'It takes only three missed meals for anarchy to reign in the city.'

We've already seen the ugly side of desperation when the storm surge hit Leyte's coastal communities in 2013 and food supplies were not immediately available to the victims of the disaster.  Riots and looting, rapes and robbery in urban areas.  People who were smart to prepare for such disasters should be able to protect even a modest supply of emergency rations and their own families if that extreme situation ever occurred again and law enforcement becomes helpless to stop hungry and angry, impatient mobs from breaking the law.

Blade training is important for you as a survival self defense option. There is real world need for people in a life or death situation, to defend themselves capably.  Whether you live in an urban zone, or in an isolated homestead in the boondocks.
filipino martial arts, kali, knife fighting, self-defense, off grid self defense, blade fighting system, special forces training, sports plus