June 22, 2015       Unravelling Mysteries
The Legendary Damascus Swords Rediscovered
There are times when invaluable technology that has been around for ages is suddenly and inexplicably lost to mankind. Some artisan knowledge like making glass that does not break (vitrium flexium), and even the legendary flying carpets have been lost.  Some relegated to tales of fancy and myth. While others are kept alive by the surviving artifacts that serve as proof these advanced devices existed. 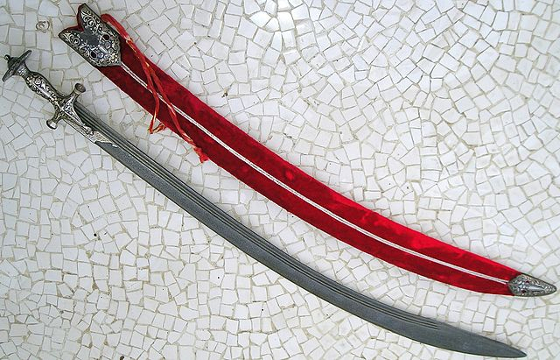 An Indian sword, the Tulwar, a blade fashioned from Damascus Steel,
a carbon infused sword to make it flexible as well as very, very strong.

The Romance of Damascus Steel

English writer, Walter Scott wrote about the legendary Damascus sword when he described a fictional meeting between Richard the Lionheart and Moor champion, Saladin.  Richard is said to have shown his sword’s strength by mightily chopping a tree in half with a single blow.  Saladin, amused at the Chrisitan Crusader's bravado, took a silk scarf, threw it into the air, and let it land on the sharp edge of his scimitar: the Moor's curved, Damascus steel cut the silk scarf in two; without a twitch from the Muslim.

The ancient art of swordmaking for Damascus steel was lost since the 1800s as modern warfare shifted from blades to gunpowder.  But this has not stopped people from trying to recreate the legendary swords ever since.  The feared curvy swords were easily recognized by a characteristic water-stain or damask pattern on their blades. 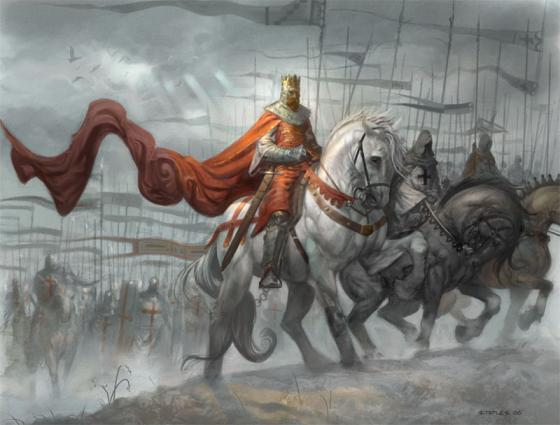 King Richard the Lionheart, according to legend showed Saladin
of the Moors after they worked a truce, how powerful the sword of the
Crusaders was by chopping down a tree in one blow.  Saladin himself
tested the keenness of the blade by dropping a silk scarf and seeing it
cut in two as it fell on the blade.

From the time of Alexander the Great in the fourth century B.C. until the last Damascus blade was forged, the armorers who made swords, shields and armor from Damascus steel kept their methods highly secret.  The technology of the firearm and gunpowder had changed the nature of warfare by the late 19th century, and swordmaking became a lost art, kept on by the few families that kept at it, like in Spain and other traditional sword-loving countries.

Since then, the secret of making the ancient Damascus blade was never truly rediscovered. Even though these blades were still in use as recently as the 1800s, no one documented the forging process.  For eight centuries the Syrian blacksmiths who made the curved swords, kept secret a very special technology.  Even clouding it with superstitious lore:  once the blades were finished, legend has it that a sword was quenched in the blood of dragons or by impaling captive slave warriors. 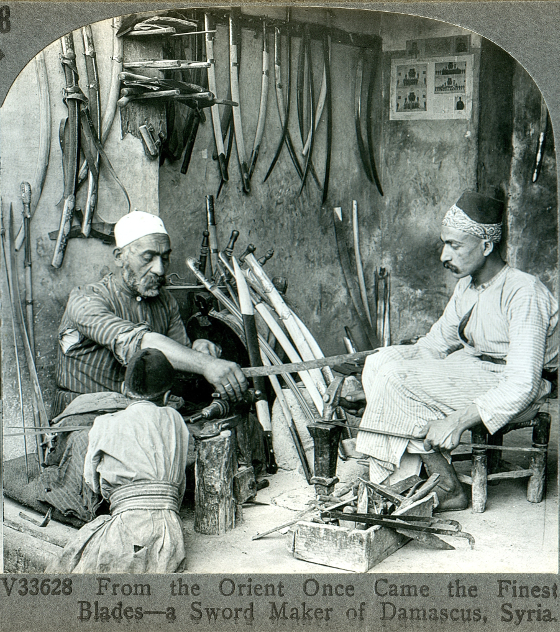 One of the few photographs of a Syrian blacksmith who made
and fashioned Damascus Blades.

A Sword Cooled by Murder

Writings found in Asia Minor said that to create a Damascus sword, the blade must be heated until it glowed 'like the sun rising in the desert.'' It then should be cooled to the color of royal purple and plunged 'into the body of a muscular slave,'' so that victim's strength would be transferred to the sword.  In the ancient accounts there is more than one reference to such homicidal blade cooling.

Scientists who tested the remaining artifacts known as Damascus steel found carbon nanotubes and nanowires embedded in them.  The carbon is imbued in the blade to create a very strong and sharp weapon that is also more flexible that a steel sword.  Damascus steel has a 1.5 to 2 per cent carbon impurity level and the technique originated in India, not in Syria.

With the impurities imbued intentionally as the sword is made, the steel forms a banded structure. There’s a central band of Fe3C, an iron and carbon combination named cementite, surrounded by softer steel. A blacksmith who makes Damascus blades, folds the steel and hammers it over low heat to create a matrix of superplastic steel:  strong and flexible, then pours acid on the sword. This eats away some of the softer steel, but leaves the nanotubes and nanowires, and creates an ultra-strong, sharp outer layer. It also brings out a swirling pattern of dark and light bands that marks it as a Damascus sword..

What the water stain patterns on a Damascus blade may look like.

Some modern scientists claim to have re-discovered the process of making the legendary Damascus Steel.  Jeffrey Wadsworth from Stanford University and Oleg D. Sherby performed comparative studies of a carbon blade they manufactured using modern tech, and a sampling of the ancient weapons, after a sword aficionado showed them that the ancient Damascus Blade had properties similar to their carbon-imbued blade. 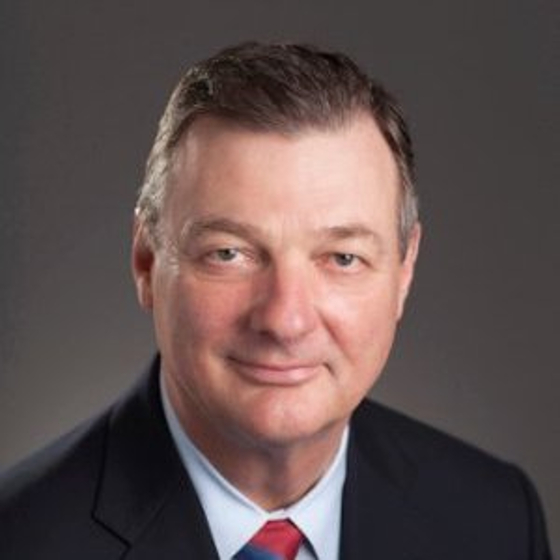 Dr. Jeff Wadsworth, a metallurgy expert from Stanford University,
rediscovered the forging process for Damascus blades and improved
on it for possible new metal making tech for composite metals
and tool making.

Dr. Wadsworth and Dr. Sherby believe the carbon imbued into Damascus steel during blade manufacture should be from 1 to 2 percent, compared to only a fraction of 1 percent in ordinary steel. Carbon nanotubes are formed during the process and these keep the steel stronger as well as flexible enough.  The carbon infusion even reveals the blade for what it is in the unmistakable water-stain patterns or damask look of the flat of the sword. 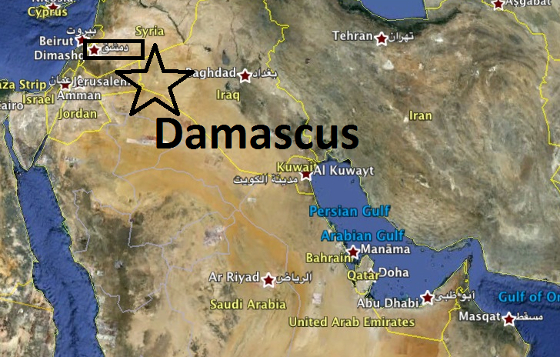 A modern map showing the current location of Damascus in Syria,
a Middle-Eastern nation where blacksmiths specializing in forging
Damascus blades, used to fluorish until the 1800s.

Once blades of Damascus steel were hammered down from blade folding, the swords were ground to a fine edge. After shaping, the blades were apparently reheated to about the same temperature, then cooled off by dousing the blade in a liquid--part of the gruesome legend of the Damascus sword was that it was impaled into slaves or captive enemies after being forged.

The similar superplastic steel that the Stanford team has created in their metal research for malleable metals is supposed to be more flexible and stronger than Damascus Steel and the carbonized metal can be reshaped into materials like gears for an automobile, with minimal need for machining, offering a low cost fabrication method for future needs.
unravelling mysteries, damascus swords, damask, water stained patterns, carbonized steel, superplastic steel, the crusaders secret weapon, king richard and saladin