Home  »  How It Works  »  Solar Maximum Cycles: Coronal Mass Ejections Can Be THE Apocalypse

Solar Maximum Cycles: Coronal Mass Ejections Can Be THE Apocalypse

January 8, 2015       How It Works
The Perils of a
Coronal Mass Ejection
At the Tail End of a Solar Maximum Cycle,
the Worst EMP Storm Can Wreak Havoc 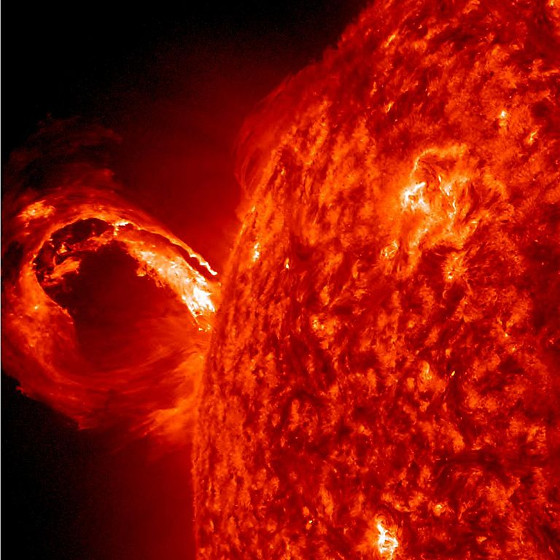 A solar flare emitting a radioactive storm of charged particles into
space is called a coronal mass ejection.  These can fry electronics
on earth.            Image from NASA    Creative Commons  CC BY 2.0
Our life giving sun has an 11-year cycle called the Solar Maximum, an event when the sun has an increase in sunspot activity, solar flares and powerful Coronal Mass Ejections.  As if it expends excess energy into space after a build-up from its fusion core reactor as one of the possibilities for this, as space scientists have observed.

The build up of solar flare activity has always been observed carefully because Coronal Mass Ejections and solar flares can cause powerful electromagnetic interference that can damage or interrupt earth satellites as well as electronics on earth itself.  One coronal mass ejection in the summer of 2012 showed that we must be very observant of the current Solar Maximum as it ebbs out this 2015 because the CMEs and solar flares surge during the latter part of the solar maximum cycle.

On July 23, 2012, the sun ejected two massive clouds of plasma that barely missed an extremely dangerous direct hit on pur planet.  The electromagnetic particle storm that passed directyl into the Earth's orbit, but fortunately our planet had already passed by.  The 2012 coronal mass ejections (CMEs), were said to be the most powerful in at least 150 years.

Instead, the magnetic storm hit NASA's STEREO-A spacecraft, which recorded the effects of the storm for careful study.  A similar event in 1859 was recorded as the Carrington Event, when a solar storm squarely hit the planet. Thankfully, the only live electric devices at the time where the American telegraph system and the CME that hit the planet set telegraph offices on fire--the telegraph wires got bombarded with an EMP burst, and the Solar storm created auroras or northern lights as far south as Hawaii.

If the 2012 "superstorm" had hit Earth directly, it would have fried power grids, satellites and almost all electronics on the planet not shielded from an EMP burst.   Such a disaster would set back civilzation into the stone age, and would take an unprepared society at least 10 years to recover from.

2014 red flags for a possible continuing Solar Maximum cycle include the sun's magnetic field changing and sunspot counts increasing while scientists count coronal holes that occur during the activity.  The current Solar Max is counted as "Solar Cycle 24, and is observed to be declining by 2015.  Ironically, this is when some of the bigger sunspots and magnetic storms are expected to flare. 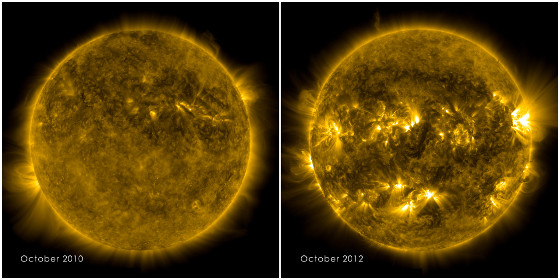 Emergency preparations for such events include keeping your emergency and survival electronics stored in a Faraday cage--which will absorb harmful radiation away from your gear; and keeping emergency back-up systems not dependent on GRID electricity.  Because supply grids dependent on electonics and the electricity grid are also vulnerable, be prepared with emergency stores and barter supply stock for the most extreme situation that may happen within the next 5 years at least.  Then keep this emergency preparedness in constant check and resupply for as long as you live.
how it works, coronal mass ejections, how dangerous is a solar storm, emp disasters, radioactive storm, solar maximum cycle, solar flares,