June 20, 2014 | By: Stephanie Quesada       Amazing Philippines
Cebu SIdetrip:  Whalesharks, Kawasan Falls,
and of course, Church!
Stephanie Quesada for REACH
If you find yourself visiting Cebu, don’t hesitate to think about visiting the three places I am about to tell you .  Our trip itself was more of a spur of the moment adventure, where we skipped them travel packages and guides and just got up and went south. 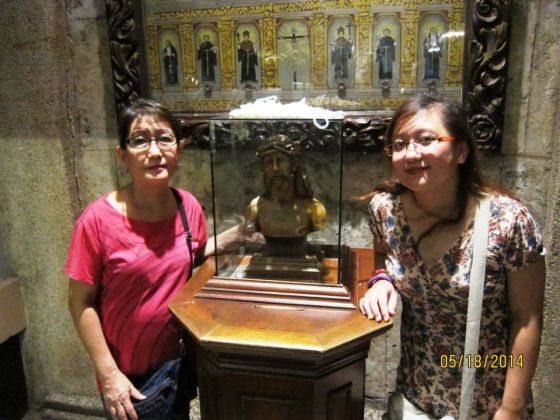 The bust of Jesus fond in a soldier's coffin, checking the Metropolitan
Cathedral's treasured Catholic artefacts was one of
the highlights of my Cebu side trip
Okay, maybe we asked a few relatives about the coolest places to be in Cebu, so we could and just go and experience a holiday there and not expect disappointments from hyped tourist traps, which, happily,  is what happened in our trip.  If you’re the type who wants to do extensive research and dig through travel blogs before going to places like these,  read on!  You just may find the best holiday place for your money’s worth.
Whaleshark diving in Tan-Awan, Oslob

This is best done in the months of April to June, when the whale sharks swim in good numbers.  We rode a bus for three hours starting from the city proper to Tan-Awan to get the chance to swim with the huge fishy brothers for thirty minutes.  It might have seemed like such a short gig, but those thirty minutes will always be some of the best fish buddy moments in my life. 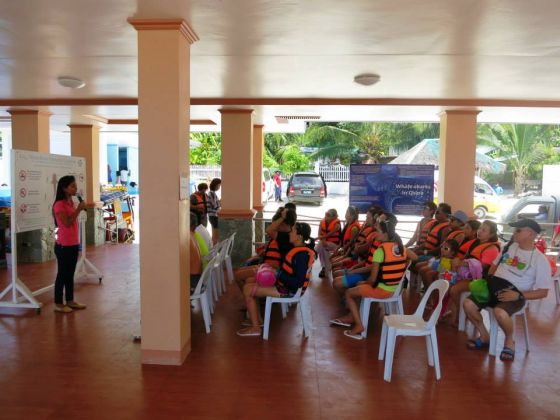 The Boat guides debrief all whaleshark swimmers the guidelines of the experience
When you get to the place, they will charge you upfront for the swim opportunity.  The whale shark experience costs P300 for sitting on the boat and oggling the fish gliding just beneath the water line,  or better yet: for P500 you can go jump in and swim with them!  Provided of course that you know how to swim in  deep water, around 30 feet of deep sea to be exact.  An extra P500 will be charged, if you opt to have your pictures/video taken with the sea creatures by the boat swains using waterproof cameras, but if you have your own, I suggest you lug that precious camera thing with you.
But before you even hop on the boat, you are required to go through a short seminar, maybe for 10 minutes, where they brief you on the swim rules and guidelines, the do’s and don’ts of the whole experience.  From what I remember, you’re not allowed to wear sunblock, so be prepared to get some major tanning.  You’re also not allowed to touch them BIG fishy buddies  too.  Unless you’re prepared to pay a hefty fine and spend some major jail time.
So after the briefing, we hopped on the tour boat, went to the location and once we caught some whale sharks swimming alongside us, I immediately jumped intp the water to swim up to  the huge creature friendlies.  The fishermen entice the whale sharks with “alamang”, which is a kind of tiny shrimp local to our country.  Apparently, the whale sharks love the free food  so much that any tour boat that visits gets an immediate welcome from the happy whale sharks, who follow your ride along until the feed runs out, or until your boat returns to shore. 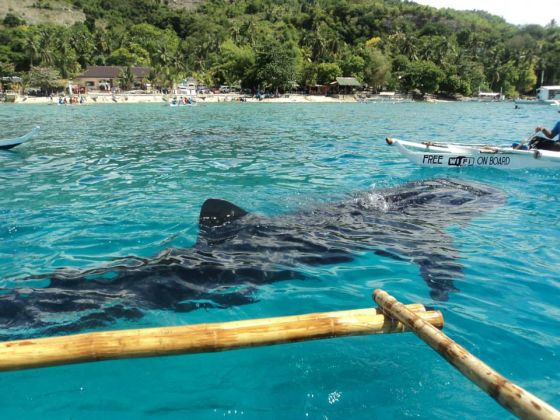 Whaleshark buddy approaching boat to snack on
alamang feed, Get ready to jump in!
For thirty minutes, I swam and posed for the camera as the whale sharks  fed on the alamang feed. The boatmen said they can consume three whole kilos of tiny shrimp in one feeding. No wonder the tour boat charges quite a bit for the  swim-buddy experience with the whale sharks.  Then it was over. We went back to shore, and the camera was given to the guy who burns the images and video feed for you on a DVD. My tip is not to waste so much time on shore, and immediately rush to the shower room, or else the queue to the cleanup lockers is  going to be so long that you will think it is an hour or more than the whole fun experience. 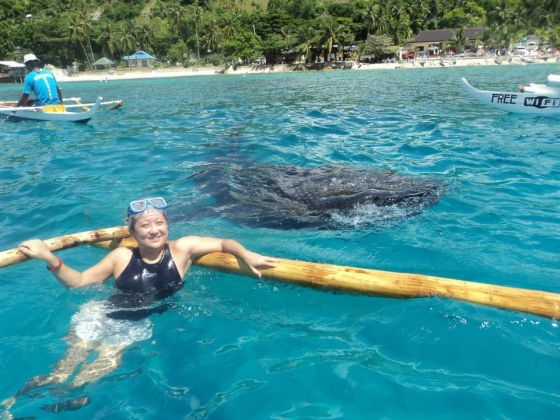 Me, and my Whaleshark Swim Buddy, hanging together like BFFs
he says 'hi' and come over  to Tan-Awan too!
Before going home, we stopped at the gift shop sitting just before the beach side. There were numerous items such as fridge magnets and tees that says “I swam with the whale sharks” on them. I bought a fish magnet because I didn’t bring much cash with me. Luckily, my cousin bought me a shirt. So make sure you bring a little cash when you go, because you’ll never know who will ask for “pasalubong” when you come back. 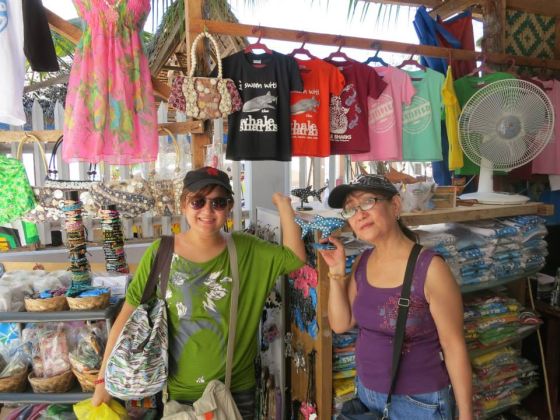 Me, hanging out at the pasalubong shop with Mom after getting to Tan-Awan

Instead of riding the three-hour bus ride home though, we decided to take a side trip to the next place I’m going to tell you about, which is...
Cooldown at Kawasan Falls

It is located in Badian, near the southernmost tip of Cebu. It’s about 130 kilometers from the city proper, and about an hour via bus from our current location. But when you get there, you’re not even “there” yet.  You still have a 1.5 kilometer trek ahead of you, just to get to the first waterfall of three glorious runoffs. If you want to see all of them, you have to be prepared for an uphill climb for 15 minutes to get to each of the two higher water falls. 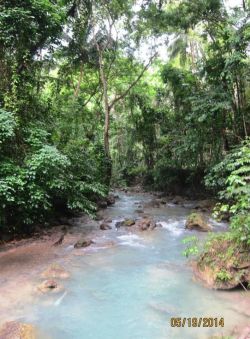 Being so tired from swimming with the whalesharks, and having two of my party members as senior citizens, we settled for seeing just the first Kawasan falls, which fortunately was the largest of the three, and has the most people visiting.  I would’ve liked to see the other two falls, but I think the trip should be dedicated to Kawasan if we did.
Ten years ago, the path to the falls snaked through the middle of a forest, and you had to be careful of slipping on wet moss and had to hold on to vines, roots and tree bark. Now the route is pretty much cleared through, and there were lights installed on the riverbanks to guide people there. We didn’t expect too much walking though, and all the people we met along the way were like kids whining “Are we there yet?” when they passed. Be sure to prepare your own food and have a lot of water for your trek. It can get tiring, even if the road is naturally beautiful and lined with interesting plants and rock formations. 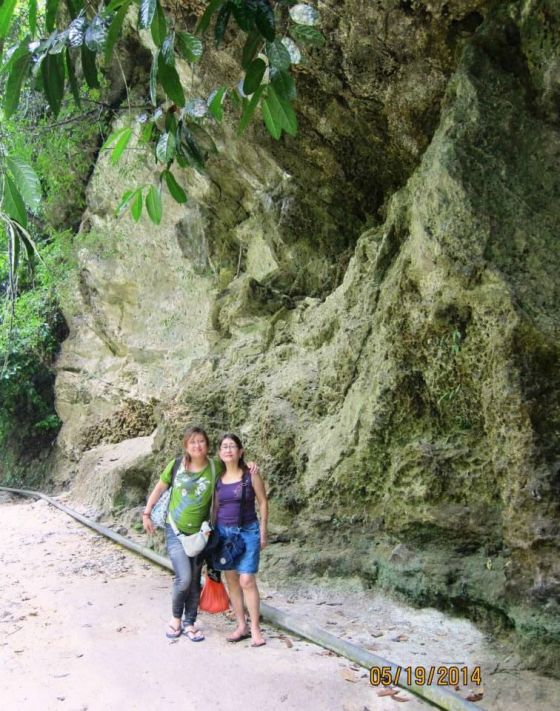 Mom and I getting our Facebook pose together, the best places
in Cebu are off the beaten path

When we finally got to the base waterfall, we discovered  that there were small restaurants near it, and there were many people swimming in the river. But the water was so cold that we didn’t dare take a swim ourselves. We just waded with our feet and stood on the rocky, shallow parts and took a lot of pictures. The restrooms have a fee per use, so be prepared and bring coins.  If you just need to change your shirts, I suggest for the ladies to bring a “Malong” for dressing room purposes so you won’t need to pay.
After a short break and some sandwiches by the river, we went back and rode the bus back to town. It took another three hours to reach Cebu City, and we were really beat. The next day was spent at home, and we didn’t get to visit the next place I’m going to tell you about until the evening, which was
Cebu Metropolitan Cathedral, and Sto. Niño church

It was near our place, and it was Sunday. We were just in time for mass. I suggest though, that you ask the locals first what time the english mass starts, because we couldn’t understand much when we sat through a whole mass in Visayan.
The cathedral was under renovation when we got there, because an earthquake struck and the old structure had slight structural damage due to the tremor's intensity. But even so, the church was very beautiful. The architecture was superb, and reminded me of the rennaisance, with the altar decorated with gold and ivory iconography and moldings.  After the mass and viewing some pictures, we visited the Sto. Niño church, which was walking distance from where we were. The original church was converted into an office, and mass was held on the courtyard due to the sheer number of people visiting. It too was under renovation during the time, but what we really wanted to see were the relics from the old Spanish era that were housed in the church museum. 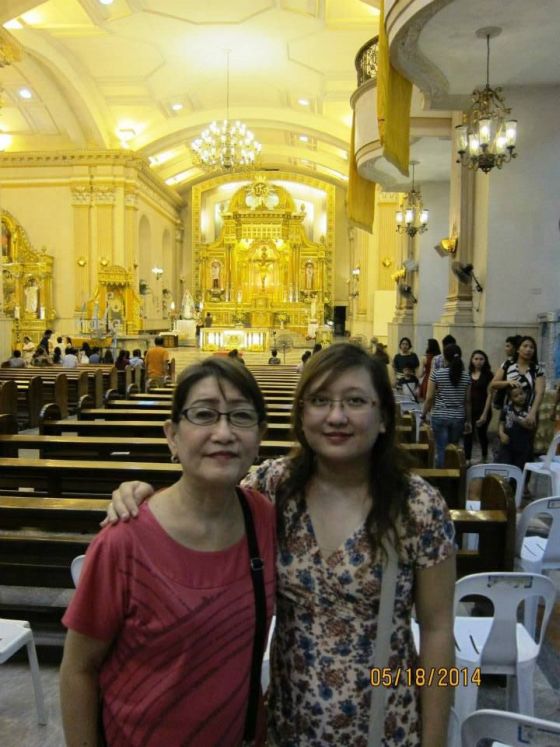 Being thankful for the best holiday with Mom and pinsan,
down south at the Metro Cathedral.
There we saw the first Sto. Niño that ever set foot in our country, and a few other relics such as the Jesus bust found in an old coffin where a slain soldier reposed. There were also various paintings that depicted history as it unfolded in that particular place a long time ago, which were very interesting to view and read as you lined up for the viewing of the relics. Outside was the cross that was propped up by the Spaniards during their first visit. During our visit though, the cross was also inder some maintenance, so there were scaffolding inside the roof that housed it. After taking a few pictures, we went back and had dinner at home.
A great visit to Cebu it really was and I fervently hope to return and visit more secret places and have a more interesting holiday experience someday.  That trip helped me learn a lot about going around for an adventure  in our Amazing Philippines and I think this short journal will help you plan a similar amazing and fun trip.  Until my next trip around!
amazing philippines, amazing cebu, cebu side trip, tan-awan whaleshark, whaleshark swim experience, cebu metropolitan cathedral, stephanie quesada, kawasan falls, cebu holiday