Home  »  Unravelling Mysteries  »  Lost Knowledge, Lost Civilizations: What was the World like during the time of the wisest man, King Solomon?

Lost Knowledge, Lost Civilizations: What was the World like during the time of the wisest man, King Solomon?

August 21, 2014       Unravelling Mysteries
The Mystery of King Solomon
Lost Knowledge and Lost Civilizations, and
the Golden Age of the Kingdom of Israel 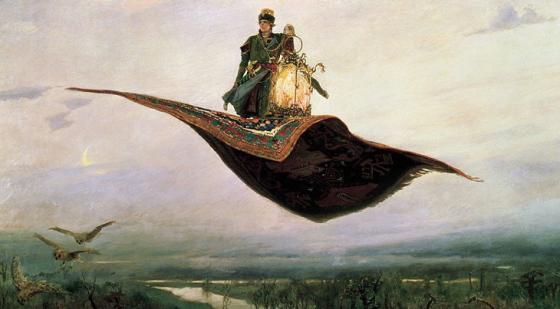 King Solomon asked God for a kingdom the glory of which no other kingdom would surpass even after his reign. God fulfilled that wish of Solomon, King David's son and heir to the throne of the kingdom of Israel.

He is also known as the Prophet Sulayman or King Sulayman in the Quran or the Moslem's holy book.  It is in the Quran as well as the Jewish Talmud, and not the Christian Bible that most of the wonders of King Solomon's reign are described and very few know about it even today, unless they make the connection from reading many fictional adaptations of the Arabian Nights as probably the kind of events and stories of heroes during the time of King Solomon.
One of the most amazing gifts, God taught Solomon was the speech of the birds and the beasts. In the Quran, plants were animate living beings in their own manner and plants could communicate their thoughts to Solomon and tell him about their benefits to the human body.  (Another revelation only found in the Muslim holy book, the Quran)
In the assembly of Prophet Sulayman, there were six hundred seats. The Israelites (Muslims as described by the prophet Mohammed in the Quran—the ArchAngel Gabriel himself is reported to have taught the prophet Mohammed the faith that is called Muslim) and Jinn (malevolent spirits of fire) would sit there. 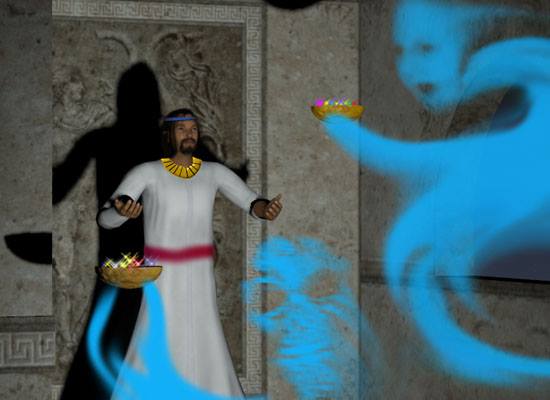 God made Solomon able to command the Jinn ( one of three kinds of beings the Lord made, Angels to serve Him, Man to worship Him, and Jinn or beings of fire).  Although they did not become Muslim, these demons worked for Solomon.

The Jinn greatly feared Solomon and none of them dared defy the work that Solomon ordered them to do. One devil who dared disobey Solomon according to the Quran was punished by the Lord with a great torture even for his kind.

So none of the remaining Jinn dared to disobey Solomon, lest they suffer punishment before the time of judgement for when their fall from God's Kingdom would be accounted for.
Solomon commanded the Jinn to build high, strong towers and edifices for him. They brought jewels and pearls from the sea. They used the legendary Shamir, a dish or stone crystal that used sunlight to cut stone into any shape for building Solomon's city, along with exotic stoneware and stonecraft like urns and vases shaped and formed by using the sun to melt granite and very hard stones.  God even made founts of copper come out of the Earth, already melted for King Solomon to make both weapons, and many other magnificent things. 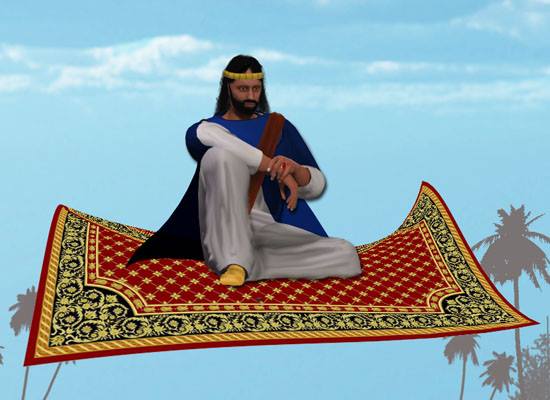 King Solomon traveled around the world using a flying carpet.

The malevolent Jinn or Demons made for Prophet Solomon a special object:  A flying carpet.  It was wide, carpet-like platform covered with gold and silk. This platform was big enough to carry many humans, tents, supplies, horses, and camels too.  In the middle of it was a place for Prophet Solomon to sit. Around Prophet Solomon the pious people also sat on golden chairs. Around them there were silver chairs for the scholars. The deadly Jinn sat around the scholars as bodyguards.
Despite the vastness of the reign of Prophet Solomon, he fought in person for the sake of spreading the faith. God even gave Solomon the power to command the 4 winds of the earth to carry his flying carpet anywhere in the world.

When King Solomon wanted to travel or fight an enemy nation or being, the carpet would be loaded with all the arms that his Israelite army needed and Solomon could call on the wind to lift his flying carpet with his army and Jinn warriors to the place of battle. When he wanted to travel faster, Solomon could call upon a stronger wind to take him on long journeys to distant places in the span of less than five hours. Birds flew over Solomon and his flying carpet-borne troops shading, and protecting them from the searing heat of the noonday sun. 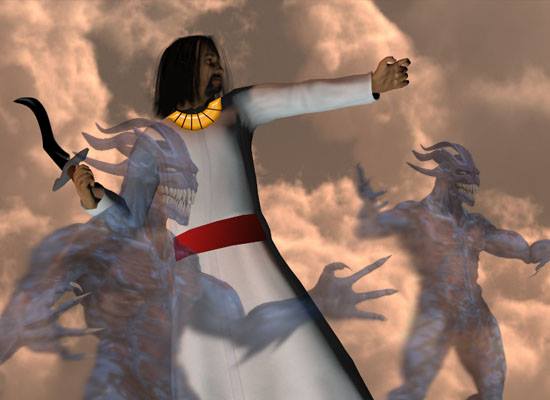 Solomon could communicate with every living thing on earth during
his reign from Demons (Fey Spirits) or Jinn to all animals
and could command the 4 winds of the earth as well.

Solomon and the Queen of Sheba (Lady Bilqis)

Once, Solomon was walking with others in a certain location. He needed water. Prophet Solomon asked for his hoopoe bird which had passed by the palace of Bilqis, a very beautiful queen from Yemen. She was from the people of a man named Saba.  The bird had glimpsed an orchard behind the palace of Yemen and dropped by for a look-see.  He heard the news from the palace that Bilqis was the queen with a grand reign, but he saw that she and her people were blasphemous, prostrating to and worshiping the sun.  The hoopoe returned to Israel and told Prophet Solomon the story of Bilqis and her people.  Prophet Solomon said, “I will check if you are truthful in your claim.” 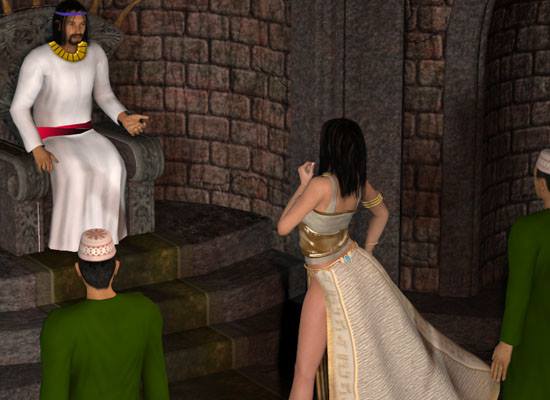 He was also beguiled by the very beautiful Queen of Sheba
who was supposed to be a very wily and devious pagan.
Solomon wrote Bilqis a short letter saying, “I start with the name of God, ar-Rahman (the One Who is merciful with believers and disbelievers in this life), ar-Rahim (The One Who is merciful only with the believers in the Hereafter). This is from Solomon. Do not disobey me and come to me as Muslims.”

Prophet Solomon ordered the hoopoe to deliver the message to Queen Bilqis.  The queen of Sheba was greatly astonished at seeing a bird come and drop a letter in her lap that was so audacious in its demands. Bilqis thought to test Solomon by sending him an irresistible  gift.  When the gift arrived to Solomon, the king of the Israel said, “Are you giving me money? God gave me better than what He gave you. You are the ones who are delighted about receiving gifts from one another. I did not request a gift from you, rather I demanded that you become Muslim.”

The gift was sent back with a stern message: “You will meet a great army which you have never experienced before. You will be unable to defeat or block the army of Prophet Solomon. We shall drive you out of your city.”  Bilqis received Solomon's message and considered: “This is a man we cannot handle.”

She set to meet King Solomon in Israel to pay homage to him.  When she approached Solomon's nation, Prophet Solomon sked a favor among the humans and jinn, “Who will bring me the throne of Bilqis [which is in Yemen]?”  Prophet Solomon wanted her throne brought to him, to prove to her that he was of the Lord's own. One of the jinn said, “I can bring you the throne before you break for lunch.  Prophet Solomon said, “I want it quicker than that.”  One among the righteous humans was an assistant of Prophet Solomon, named Asaf Ibn Barkhiya who delivered the request, which was a supernatural feat, considering that the throne of Bilqis was 120 feet long and 60 feet wide, covered with jewels.

When Bilqis arrived to Prophet Solomon, he showed her throne and asked her, “Is this how your throne looks?”  She said, “It is as if it is mine.”  Prophet Solomon told her, “It is really yours. The fact that you locked your doors did not benefit you!”  Prophet Solomon then ordered the Jinn to build a very grand structure out of glass like a ramp where running water under it would show fish and other things one would see in the sea.  Solomon's crew asked Bilqis to walk on this grand structure and she thought it was actually water as she had never seen glass this fine and clear and strong as a walking ramp. She slightly lifted her dress to walk to avoid having it get wet to approach King Solomon.  Solomon averted his eyes away when she lifted her skirt and told her, “This is made out of smooth glass. Do not fear; you can step on it.”  Seeing even this, the Queen of Sheba knew that the Lord God had endowed Solomon more than her kingdom could ever hope to muster even in its mightiest form.  According to the Quran, she was overwhelmed and supplicated herslef to God and became a Muslim.

The Death of Prophet Solomon and
the End of the most Glorious Age of Ancient Israel
The time came for Solomon's death and the Christian Bible claims that the good King had been subverted in his later years by his wives and was now worshipping idols along with his wives.  But in the Quran, King Solomon is depicted as a true heroic and wise King of Israel.  His death is narrated by the Prophet Muhammad: “When Solomon stood to pray in his niche, a plant emerged.  When Prophet Solomon was praying, a plant sprouted up from between his hands as he was communing with the Lord. He asked the plant what its name was and the plant said “The carob.”  He said, “For what were you created?”  It said, “To destroy this house.”  This was an omen of his and Solomon understood the Lord's will.  King Solomon prayed:  O my Lord, I ask that the news of my death be kept from the jinn, for the humans to know that the Jinn or Demons do not know the future.”  (Some humans used to believe that the Jinn or Demons could see the future and often summoned them for counsel of the future not knowing that Jinn would lie and tempt one to his own destruction).

King Solomon took that Carob which had grown up and made a stick out of it. He leaned against that stick and died. Prophet Solomon stayed in that position for an entire year, being dead, leaning against that stick. The jinn stayed on in the kingdom of Israel, oblivious to Solomon's fate and still doing all the work set out by Solomon for them.

One day, a small insect called “Al-Aradah”  jumped on the stick of Solomon and chewed on the stick until it broke and the dead King Solomon fell down on the floor.  When the Jinn saw that, they knew that Solomon had died and they were now free from the bond to serve the nation of Israel as Solomon's peons and bodyguards.  It might be this glaring revelation in the Quran that the Catholic translators omitted from the original texts of the Greek and older transcriptions of the time of Solomon.  In the Christian version of Solomon, no mighty supernatural feats were mentioned, much less those of Jinns who served King Solomon, his flying carpet and more.