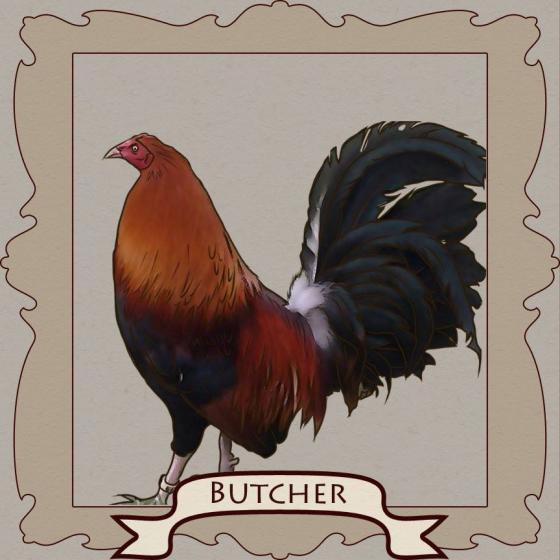 Phil Marsh (1869-1945) - Phil was probably the best known of the Marsh family as he became nationally known through his efforts in breeding and fighting gamefowl. It was Phil who made the Speeder bloodline and along with his son Bill created the Butcher fowl. He operated a meat market in Fort Plain,N.Y., and the Butchers were named after his profession. Phil was considered to be a better breeder than conditioner than his kids who continued the Butcher bloodline until this day.

Butchers: The Butchers are the result of a cross between Marsh Speeders and Groves Whitehackles in 1915 and by 1920 were set as a strain. Through selective breeding the Butchers come black-red with a straight comb, white and yellow legs, and have red, orange and lemon color hackles. Additionally their breasts may have red flecks.

The Butchers are known primarily as head and neck cutters as that is what is needed in short heel fighting, but they can and do cut very well to the body. In addition they are known as good side steppers.  They weave when their opponent comes in with a killer attack, but they CAN initiate a killing shuffle because they are deadly cutters.  The old strain by Phil Marsh is what you should be looking for if you want the best Marsh Butcher among your Broodstock.