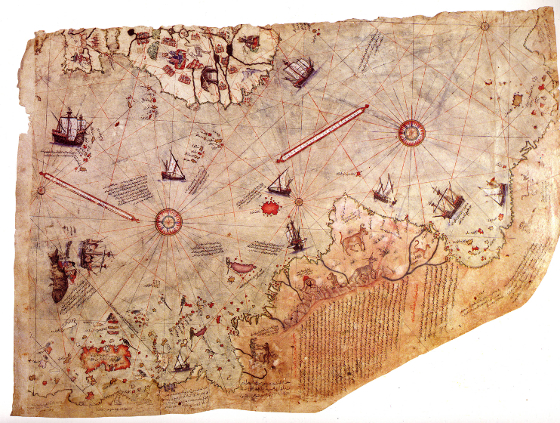 In 1929, a group of historians found an amazing map drawn on a gazelle skin or vellum.  A genuine navigational map from 1513 by Piri Reis, famous admiral and cartographer of the Turkish fleet in the sixteenth century.  Someone with privileged access to the Imperial Library of Constantinople.  Piri Reis used scraps from ancient maps he found in the library to put together his map.  He has liner notes on the map telling the user that the original surveying and cartography of the landmasses were done by other sailors and parts of it from charts dating back up to antiquity:  the 4th century BC.
The Controversy

In the Piri Reis map, precise details of the western coast of Africa, the eastern coast of South America, and the northern coast of Antarctica are shown including the northern coastline of Antarctica, 300 years before Antarctica was discovered.  The last time Antarctica was free from ice was in 4000 BC.
Geographic historical science prescribes that the ice-cap covering Antarctica today is over a million years old.  The Piri Reis map shows that the northern part of that continent has been mapped before glaciers engulfed the region.  Traditional history identifies the first civilization developing in the Africa around 3000 BC, Sumeria.  Then followed within a millennium by the Indus valley, then the Chinese civilization. None of these ancient races could have made the reference maps that Piri Reis used to make his famous uncanny chart.  An ancient civilization may have existed around 4000 years BC, with sea-charting and mapmaking technology that was lost for thousands of years until man rediscovered mapmaking and accurate sea navigation with sextants in the 1700s.

A Map Made from the Sky

To check out the accuracy of the map, a Turkish navyman sent the the Piri Reis map to the U.S. Navy Hydrographic Bureau.  M.I. Walters, the Chief Engineer of the Bureau examined the map and contacted Arlington H. Mallery, an authority on ancient maps for the U.S Navy for document authentication.

The map expert made a grid and transferred the Piri Reis map onto a globe: the Piri Reis map was totally accurate, and the only way this could hold true was if the map were made from aerial land surveying.  Map making technology was only accurately rediscovered and developed in the 18th century according to map navigation experts.  Imagine that 6000 years ago, someone flew around the world to map the earth?  The U.S. Navy was reportedly even able to correct some errors in their sea navigational maps using the Piri Reis map.

The people who made the ancient maps used as reference for the Piri Reis map already knew that the Earth was round and they could fly around the world to survey and create a very precise world navigational map.  Mind boggling?  Was it Atlantis?
Crust Slide Theory

Charles Hapgood wrote a book called Earth's Shifting Crust in 1953.  Earth-crust displacement is one geological theory that is different from the scientifically accepted plate-tectonics or the continental drift theories.  Hapgood's theory proposes that the entire outer crust of the earth, the lithosphere "may be physically displaced during a build up of certain forces to move over the soft inner core of the Earth:  Hapgood's example of the skin of an orange, when loose, shifting over the inner part of the orange all in one piece.  Physicist Albert Einstein even supported Hapgood with a foreword to his book: "In a polar region there is a continual deposition of ice, which is not symmetrically distributed about the pole. The earth's rotation acts on these unsymmetrically deposited masses, and produces a centrifugal momentum that is transmitted to the rigid crust of the earth. The constantly increasing centrifugal momentum produced in this way will, when it has reached a certain point, produce a movement of the earth's crust over the rest of the earth's body...."   The configuration of the Piri Reis map may indicate that the supposed ancient equator may hold true and a possible worldwide disaster and crust slide may have happened before Antarctica got displaced into the South Pole and got covered in glaciers.
Lost Civilization's Map Tech

Before 1761, there was no known way to calculate the longitude, because sextants haven't been invented yet.  The navigational instrument was invented by Englishman John Harrison.  How could early civilizations map the earth precisely if they did not have advanced sea nav or aerial surveying technology?  The Piri Reis map also reveals land masses that were still unexplored by the west at that time.  Impossible knowledge and a mapping precision that is surprising for the time when the map was made. 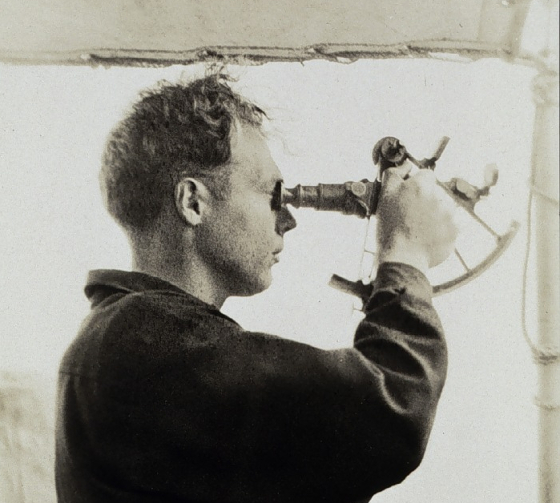 The sextant was only invented in 1761, while ancient maps more
accurate than 1950s U.S. Navy maps had already existed in scraps
and redrawn charts like the Piri Reis map.
Whatever map technology was lost by that ancient people, scraps of maps used by them were slowly recovered over time from disparate places and copied.  These are still kept in libraries, bazaars, markets and the strangest of places like carvings on a rock column in China, circa 1137.  Using the same grid method on the map carved onto stone, Charles Hapgood confirmed the  same high level of map technology that used spheroid trigonometry and pointing to a lost civilization from before man's recorded history.
unravelling mysteries, gates of hell, entrance to the underworld, ancient lore about hades, hades, kamisama, the devil, djinn, illuminati