Detecting Alien Civilization on other Planets

February 14, 2014       Curious Mind
Detecting Intelligent
Life on other Planets
After incredible finds of actual planetary systems outside of our own within the past decade, scientists have stepped up their efforts to seek out planets that might home to alien civilizations.

Joe Satriani's immortal guitar song, Surfing with the Alien might just be the perfect soundtrack for planet watchers looking for worlds out there that might harbor both life AND civilization.  Scientists use space telescopes and powerful obesrvatories to look for the telltale signs that would indicate whether that Goldilocks planet (a world in a zone similar as Earth's where the heat from its star is warm enough to sustain life) you've been scoping has aliens. 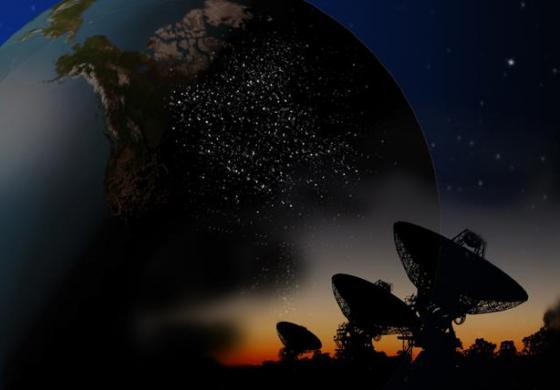 From space, earth's cities are visible at night via city lights which illuminate the darkside of the planet like tiny pinlights showing where civilization resides.  A 50km-wide city like Tokyo emits enough light to be easily visible with existing optical scopes.  This is the same way we might detect life on other planets as proposed by Professor Abraham Loeb at Harvard University and Professor Edwin Turner at Princeton University.  A space telescope more than 100 times wider than Hubble would easily find.
City lights on far away planets.  The James Webb Space Telescope’s 6.5m mirror, will be launched in 2018, and won't we be surprised to see darkside planets showing city lights too.

Using the Big Ear radio telescope in Ohio in 1977, the astronomer Jerry Ehman picked up a strange signal. The transmission showed the telltale indications of an artificial source and resonated for 72 seconds before the signal stopped. The 1977 discovery was popularly known as the ‘Wow!’ signal after Ehman scrawled the word on the computer readout.  The Search for extraterrestrial Intelligence (SETI) Institute in California, a private entity committed to finding and detecting E.T. signals, is now targeting all planetary system found by the Kepler telescope, especially those with planets in habitable, Goldilocks zones.
Scientists are using both eyes and ears, aided by the most advanced technology we have right now for exploring the far reaches of space for detecting life and alien civilization.  When we do find them, it wouldn't be that bad of a follow up to the Beatles (Galileo) to send them a Joe Satriani album.
detecting alien life, seti, city lights on alien planet, life on other planets, curious mind, kepler mission, space telescope, finding goldilocks worlds