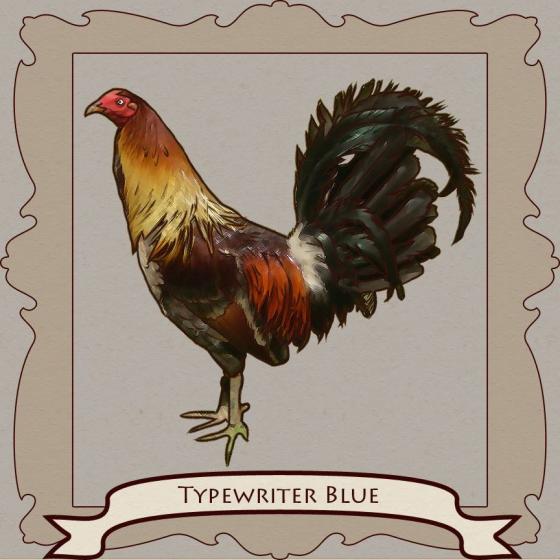 “The Judge” Ed Wilkens Typewriters, a Blue Gamefowl
Known throughout the southwest and southern majors, the Typewriter is an offshoot of Irish gamefowl that has produced an outstanding  record in its heyday as a Blue pit fighter.  The blood of this fighting Blue is seen in many modern strains and has infused gameness and fight smarts into every gamefowl it shares its genes with.

Ed Wilkens was the originator of the Typewriter bloodline many years ago, and ironically hated Blue fowl like Pinoys disdain the Talisayin over the 'Texas'.  Captain Oakley, a native of Alabama and stationed near San Antonio at an Army post, brought the “Judge,” three Blue hens imported from Ireland. These hens were called Oakley blues and had white and yellow legs. Judge put the three hens and a Phil Marsh cock at a placed called Mitchell Lake.

“The Judge” thought the Blue gamefowl as an aberration and ordered them to be culled, as he preferred purestock 'Reds.'  The Judge's son really liked the high stationed Blue chickens so he raised them himself.  The farmhands knew him and used the nickname "Blue" because he liked the unusual birds so much.

'Blue' fought one of the stags at a local derby and after the Judge saw the battle, changed his mind about Blue fowl. Wilkens picked up all the Blues and put the same winning cock of his son back with the Oakley hens and started mating them.  When they fed the Blues in their own coop, eating from in tin cups, the fowl made a sound like a typewriter as they were pecking away so the name stuck.

The Judge decided to call them Wilkens Typewriters.

The Judge fought a number of mains with the Wilkens Typewriters and defeated many of the best gamefowl of prominent cockers. One of the more important was against Colonel Madigan, at that time fighting Rangers, which were not up to snuff against the Blue Typewriters. Stakes at that event were $10 thousand on the odd, and $100 on the battle, 21 cocks all.

Sadly, the Judge was murdered by a gang of teen-age thugs who attacked him on a San Antonio street while he was returning alone from a successful day in the cockpit.  His handler inherited his yard and kept the Typewriter Blues alive long enough for other cockers to get them and breed them too.

Fighting Style
Typewriters fight high in the air and break high too.  They can shuffle hit in the air and also on the ground without a bill hold.  The Blue stags and cocks are serious dead game.  The Judge lucked out on breeding them off the Phil Marsh line and Oakley Blues, when these gamefowl were still at the top of their game.  And even after all these years, the Typewriters still retain their traits as the best among the Blues.  They were notorious for being 'one round or first buckle killer' fighting birds being as deadly as they were.