Home  »  Green-Minded  »  Guerilla Gardening: Taking the Streets Back by Planting Food and Flowers

Guerilla Gardening: Taking the Streets Back by Planting Food and Flowers

October 12, 2016       Green-Minded
Guerilla Gardening
Take the streets back by growing
fruit trees and food crops on every
sidewalk and public urban space

Books on guerilla gardening serve as a guide for communities
who want to be active in their own locales seedbombing or
planting lots with food crops.
A woman named Tara Hui hit the headlines of Inhabitat.com for organinzing a group of sneaky activists who are grafting fruit tree branches on sterile apple, plum and pear trees lining a public road in San Francisco.

The act is supposed to be illegal but in the west, a strong grassroots movement branded as Guerilla Gardening is slowly gaining popularity among activists looking for innovative ways to create a better community life in urban areas.  Tara Hui's group are known as Guerilla Grafters themselves.  They even have a website!
Guerrilla gardening is now an organized movement by green activists in cities around the world that attempt to reclaim empty or unused urban public spaces and give them a "grow food" makeover:
Fruit bearing trees that line city sidewalks in the U.S. and western cities are often the sterilized variety because the city government does not want to spend precious funds for cleaning up dropped fruit and spoiled fruit each year if the entire city were lined with fruit-bearing trees. 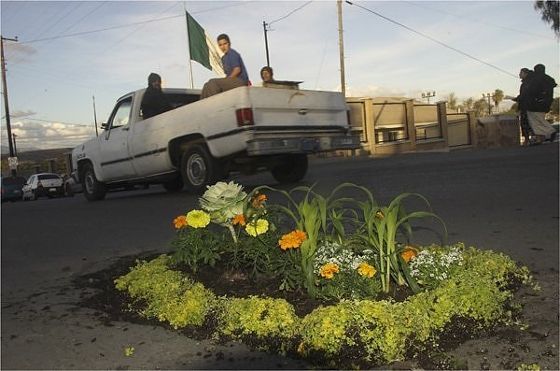 Image Credit:  Shannon Spanhake, A Tijuana Garden
Pot holes in city streets appropriated by roaming guerilla
gardeners into flower beds.  This kind of plantings also warn
motorists with visible signs of pot hole locations
The most publicized guerrilla gardening activism right now is when people appropriate urban public spaces like sidewalks, potholes or empty lots for growing food crops like tomatoes and herbs, and pollinator flowers.  Citizens who do what guerilla gardeners are doing get charged by local city officials as a nuisance and violation of city zoning laws, sometimes charging them with vandalism.
Historical Guerilla Gardeners

Celebrated guerrilla gardener John "Appleseed" Chapman from Ohio, USA (1801) was renowned for spreading apple seeds randomly where he travelled. Chapman even built up apple tree nurseries with fences around them to protect them from livestock.  Appleseed tended numerous apple tree nurseries in several Ohio towns.  His legendary exploits have been put together as an animated children's TV show in the early 70s by Rankin Bass in its Festival of Family Classics toon show.
Greenaid (Los Angeles)

Greenaid is a Los Angeles based organization founded in 2010 by Daniel Phillips and Kim Karlsrud of Common Studio. The group converts unused gumball machines to dispense flower seed balls: a combination of clay, compost and region-specific seeds.  These "seed bombs" are tossed in vacant lots or placed in any urban area that exposed to rain and sun so they can grow wild flowers when the seeds germinate and mature.  The Seed Bomb project of Greenaid has been pushed as a Kickstarter crowd-funded mission to get more gumball dispenser machines around the country outfitted with flower seed bombs. 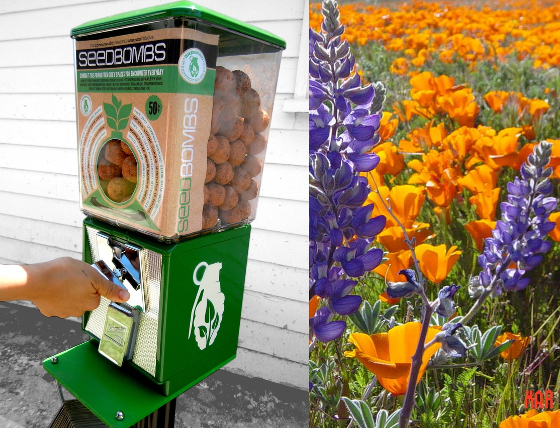 Image Credit:  Greenaid
A look at the Bubblegum machines converted into coin-op
dispensers for flower seed bombs.  Seedbombs are thrown
into vacant lots or public spaces to gorw widlflowers.
Seed bombing as a popular regreening advocacy may be a more benign way of green activism but many are responding positively to the Kickstarter project. In July 2010, Greenaid received $10,398 in funding from the Kickstarter community. Greenaid is getting in touch with business owners, educators and citizens to distribute seedbomb vending machines in various communities worldwide.

With region-specific seedbomb mixes, Greenaid aims to integrate and beautify rather than disrupt traditionally bland urban areas such as sidewalks and concrete islands on highways that have soil on them but withered plants.

Guerrillagardening.org is a blog started Richard Reynolds that since 2004 has been pushing for guerrilla gardening outside Perronet House, a council block in London's Elephant and Castle district.  Reynolds has even published a book about the activism and is networking with communities around the world to push green activism and grow-own-food advocacies everywhere.

The guerilla gardening group in England has also gone as far as using empty lots in urban spaces to plant crops like vegetable rows, berry bushes and even fruit-growing trees. 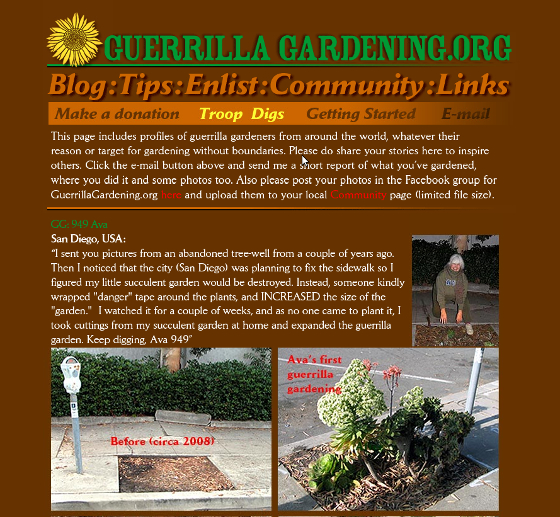 Permablitz is a community of grow-your-own-food activists that is based in Melbourne.  Unlike Fleet Farming in the U.S., Permablitz designs and constructs suburban vegetable gardens for free.  Educating residents how to grow their own food and prepare them for food prices become too expensive.

"Permablitz" gatherings at home sites that take on them have a group of people separately sheet-mulching, planting fruit trees, digging paths, making vegetable beds with no-dig methods or installng greywater systems. Volunteers at such gathering are shown what to do and assigned with veterans to finish a food farm set up.  Short workshops about growing food and planting food gardens in backyards or public urban spaces are also held by Permablitz so participating new recruits can learn new skills.

In our own polluted Manila, an interesting guerilla gardening crusade or project may be to get a thick-stemmed Golden Porthos or the so called devil vine / money plant and attach it to every tree in the urban landscape.  When it grows, it climbs up the tree rapidly and creates a canopy of air-pollution filtering leaves as huge as lily pads.

A money plant or Porthos Vine that roots onto a tree as a plant symbiote grows huge leaves that can filter up to 50 percent of ambient air pollution as confirmed by a NASA study   The leaves themselves look gorgeous as streaked green and gold pods in sunlight. 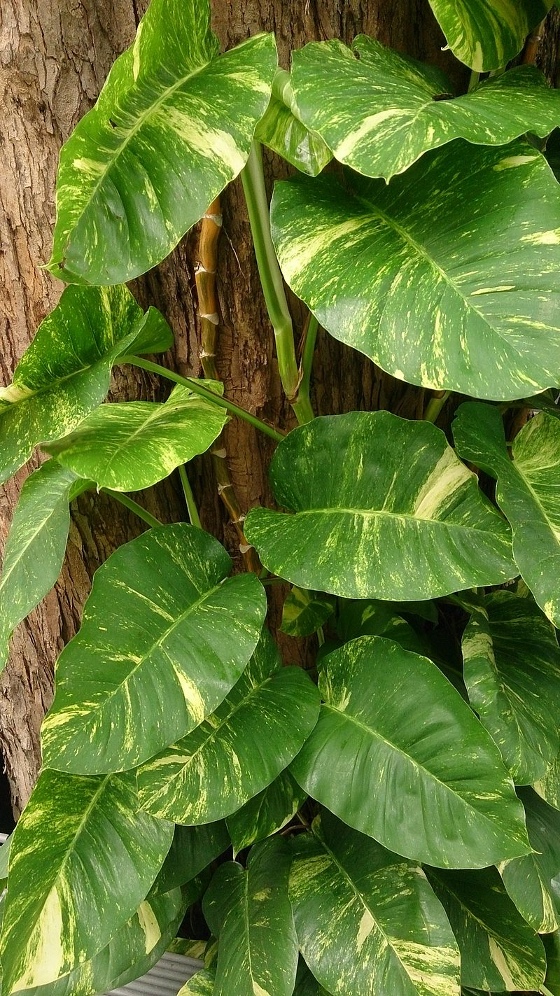 When the money plant or Golden Porthos (also called devil vine)
climbs up a tree trunk it grows huge leaves like lily pads to
soak up the sunlight which also makes it the best air filter
nature  provides us and is still underutilized as a pollution control
idea when implemented on local trees lining streets and boulevards.

The only downside to this is that the devil vine grows more vine shoots that dangle down from the branches making any tree look like a balete with money plant vines.  The Devil Vine also encroaches from the tree root outwards on the surface of the ground.  An ornamental tree will look very strange with the Porthos vine overwhelming its trunk and branches like a Frankenstein balete.

There is no use in maintaining ornamental manicured gardens in this day and age because such displays of non-useful vegetation cost plenty in maintenance.  Unlike just having plenty of trees shading the city from ambient heat and reducing the workload on aircons in buildings.  The trees themselves that are already in place can be wrapped with Devil Vine to filter air of pollution.

Many Filipino legislators have already pushed for various measures for going back to nature.

To solve almost every current urban problem, from storm season floods, to having pockets of food growing communities in the Metro, the only way to survive the future may be to go back to simple solutions that nature has already shown us.
green minded, garden gangs, community food gardens, pollinator beds, guerilla gardening, green activism