by Michael D. Kanoy
for REACH
For old geezers like me, it is a sad thing to see the world turn and kids get stuck with godawful tunes to mark the best years of their lives.  Good thing geeky kids have anime anthems to tide themselves over but for corporate radio and rock, you get the eye of the tiger rawr rawr rawr....pffft.  Ignominy putrid et fist ye et spit-on-yer-sancti for corporate radio, Amen.
Its like the 70s all over again, when sitting through the school bus ride home, you'd have to bear with the bus driver's preference for....well, music.  Thank God we had Sesame Street sing-song groovy back then.
Good thing too that growing up in the 80s, rock came into its own.  As unforgettable pop music.  As cheesy love songs like no other.    Even dance music of that era became the template of most pop music that is STILL making waves in the new millennium.  KPOP borrows heavily from everything bubblegum and dance from the 80s.   Something for everyone. But the best gig then, was metal evolving into extreme guitar anthems with shred-your-face, guitar solos that will always be the hallmark of any self-respecting rock song. 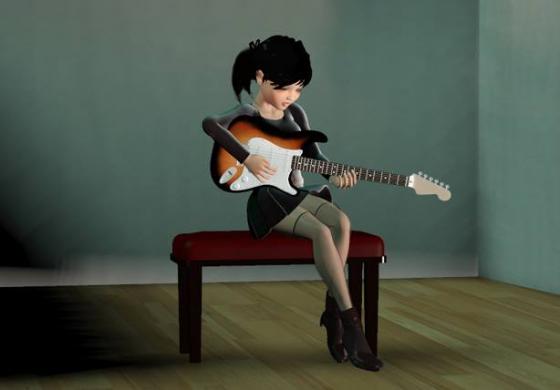 Asians are especially fond of American rock music from the 80s than Americans will ever be.  In fact, most Americans shun that era with extreme distaste and call rock music and musicians from that era as freakish and lame.  Calling the 80s rock music,  hair metal, just shows you how much appreciation the progressive Yanks have for that era. Don't call them sentimental, no-siree.
But we know differently.  The best guitar players of the 80s are revered as living gods in their own right in Japan, South Korea and even China.  Asians nostalgic and sentimental for an era when the world rocked are now teaching their kids to become their own rock idols.
A good thing In the west (USA), kids are more attuned to do the drums and pound away like mad.  Some are even musician prodigies for rock music, learning songs by ear and playing the most technical and difficult rock songs from pop prog to rock anthems to shred classics of immortal 80s metal guitar virtuosos.  Lucky kids with metalhead parents, or generous ones at least, get a drum kit for their 6th birthday and the rest is history....
Parents who grew up with awesome songs now have kids of their own to share their favorite tunes with.  And boy are they showing their children how to rock.
Buy a kid a decent guitar, bass, acoustic or electric, or a REAL drum and kit let them listen to holy music and watch them turn into the Lord's choir of cherubim.  Oh.  The Lord listens to rock too.  Where your faith stands, it will only be strong if it is rooted on a foundation of the Lord's holy rock--the Word of God.  A joyful noise of praise---as Psalms describes the Lord's music.  And the Holy Spirit will tell you that it is true the way you read it.
Exposing kids to amazing good music will always be like teaching them a timeless prayer of faith that resonates forever.  Faith stands in the power of the Lord.  That kind of thing too.
Welcome to the world of child music prodigies rocking out.
Child prodigies who excel in classical music are a dime a dozen, and are often kids from either musician parents or families that can afford to have their kids learn the canon and the craft from teachers in academes of music.
But rock music child prodigies?

You would think 2.3 million who click like on a You Tube video of an 8 year old girl going by the monicker Li-sa-X playing Paul Gilbert's classic 80s speed metal, guitar instrumental ( SCARIFIED ), would rather do the same for a performance by any child prodigy of any difficult classical piece? (unless it was an electric guitar song)
Exactly.
As 2014 heralds Jpop-Death Metal girl-band, BABYMETAL, a live band backing princess  jamming, Su-Metal and the screaming-dancers, Yui-Metal and Moa-metal; as the coming of the Metal Resistance, loudly storming the charts, AND the live performance events the world over.  As proof of those saved by the religion, 10 million AND counting, dudebros and metal sisters, have liked their latest You Tube death metal nursery rhyme, GIVE ME CHOCOLATE!
Virtuoso-musician kids like Li-Sa-X are also making the world know that ROCK is back and their generation won't lack for good musicians, no matter what the despicable tunes, corporate rock feeds them.
Take a look at the latest crop of musicians keeping the flame alive for their generation:

Video: all rights reserved to You Tube and Sungha Jung/jwcfree
Before he became the touring performer he is today, Sungha Jung
playing acoustic version of Bon Jovi's Living on a Prayer on You Tube

While My Guitar Gently Weeps

Seongha Jeong (in easy English: Sungha Jung) is a South Korean prodigy guitarist who broke the mold of the child as rock guitar virtuoso rising to fame on YouTube and other sites, mainly through a South Korean and Asian audience, with breathtaking  acoustic guitar renditions of pop and rock anthems.  He has grown up to be a so called 'heartthrob' among the ladies as he is now in his mid teens and looking like the handsome Korean acoustic rock virtuoso that he is.
Seongha typically takes three days to learn and practice a new song, and video-record it for upload onto YouTube. His choice of songs range from U2 to Disney tunes, to even our own Huling El Bimbo. Learning a song in 3 days by ear and playing them on the guitar with his own swinging rendition, Seongha has won 13 awards on YouTube.  Also on YouTube, Seongha has 24 videos with over one million views. He also just released his first album and has already toured numerous countries in Asia and the world over.

Video: all rights reserved to You Tube and Li-Sa-X
8-year-old, Li-Sa-X  playing Racer X's classic speed metal guitar
instrumental song and when 2.7 million rock fans like your
guitar video, you are anointed as the torchbearer of the faith.

First Daughter of the Guitar School of Paul Gilbert

Yep.  The Japanese are heavenly blessed to know that shred guitar is the music of the cosmos, consistently producing the finest shred guitar virtuosos in the world after accepting and keeping alive a religion started by Rising Force god, Yngwie J. Malmsteen and Paul Gilbert.
Since the 80s, most of the young musicians who have lived the cosmic dream were young Japanese male musicians shredding like the masters—to the derision of western rock press snobs calling them Japanese Yngwie Malmsteen's like it were a curse.  Sheesh.
Recently, a Japanese dad, enamored of Mr. Big and Racer X axeman, Paul Gilbert, taught his daughter Lisa (then a pixie 7-year-old), a pop song first ( Green Tinted Sixties Mind ) and posted the video of her playing the song with her electric guitar on You Tube.
Then this year, after jamming with her on a guitar instrumental song, Racer X's Scarified, the YouTube video which was uploaded last March has snowballed into 2.3 million likes and counting) from all them refugees of guitar rock and speed metal.  Paul Gilbert can play fast because he has big hands and long fingers aside from being an astute musician himself.  Only 8-years old, this little Japanese girl shows how deft her small fingers can navigate the fretboard of an Ibanez electric like a pro and totally rip the immortal Racer X guitar song with the cool demeanor of a cherubim in prayer, with a thumbs up at the start, and a happy, knowing smile at the end.  Trusting that her dad will show her more Racer X songs to learn.  Good God.  Bless you for the Japanese no matter what other idiots say.

Video: all rights reserved to You Tube and Newberry Rock School
Also on You Tube, playing one of the most difficult pop songs
to master, Rush's cult favorite, Subdivisions, is 11-year-old
Owen, keeping the hope alive for progressive technical
drumming for pop songs.

When they first came on, music critics hated them for prog cheesiness and bad song writing.  A bazillion fans, 3 decades  later, RUSH still inspires kids of all ages that good rock music always defies music critiques' notions of what good rock music is.  No shit.  Owen is an 11 year old kid with a You Tube portfolio of the finest RUSH drum covers including Subdivisions, one of the most difficult pop songs to master.  Check him out, then check the band's discography for some more.
Video: all rights reserved to You Tube and Newberry Rock School
Also from You Tube, another popular child prodigy-musician,
Avery Molek, playing since he was 5, playing fan favorite song
from Metallica: Master of Puppets!
Molek: Rock Drummer of the Future

Avery Molek is an American who was raised on KISS videos to make him stop crying as a baby, then his parents bought him a drum kit and the rest is You Tube viral history.  His envious rock fans exclaim that the young kid has it made with the girls when he grows up.  From rock fan parents to one of the best child music prodigies for rock drumming.
Video: all rights reserved to You Tube and Newberry Rock School
Popular child prodigy on You Tube studying guitar craft
at a music school is Zoe Thomson from the UK.

11 year old, Zoe Thomson: Girls ROCK Better
Zoe is a phenomenon on her own, especially among the technical guitar rock music enthusiasts and she promises to be one of the finest rock guitar experts who can shred even better than the boys.  In the shown You Tube video link, she is only 8 years old and shredding.
A Genetic Phenomenon?

These days, old metalhead parents are teaching their kids or nephews and nieces how to play shred guitar or technical drumming.  A psychology professor at Boston College who has studied child prodigies says, "People are fascinated by these children because they don't understand where it came from. You will see parents who say, 'I wasn't like this; my husband wasn't like this.' It seems to sometimes just come out of the blue."
No studies have been made comparing the brains of prodigies with those of average people yet.  And the most telling research will probably that one showing that musician guitar players brains function differently than non-musician guitar players which is why their playing sings.
“The skill of being a child prodigy is the skill of mastering something that's already been invented — whether it's Western math, classical music or realistic drawing,” says the Boston researcher.  Adult creators actually do something in a new way which is a very different skill, and most prodigies do not make that transition from copying a memory to creating new magic.
But despite all the worries from everyone, a kid's got to do what a kid's got to do.  Who needs to worry about what some pundits think or need to understand.
Children having fun playing rock and roll shows there is a God and He is good indeed.
li-sa-x, sunghwa, child prodigy music, rock music, instrumetnal muisc, rock guitar, zoe thomson, avery molek, owensdrumming