Is 2012 Teleportation Girl Video a Hoax or Evidence of Time-traveling Humans?

November 22, 2016       Unravelling Mysteries
Teleportation Girl
Rescue Video
Viral Marketing Trick or Real Life
CCTV Evidence for Time-traveling
Humans from the Future?
The infamously popular You Tube video for Teleportation Girl Rescue went viral in 2012 or so and has been both debunked and endorsed by numerous people online who say it's either a viral marketing gimmick for an online video game on a Chinese MMO server, or a hoax perpetrated by video hacks who manipulated two videos and superimposed them into one. 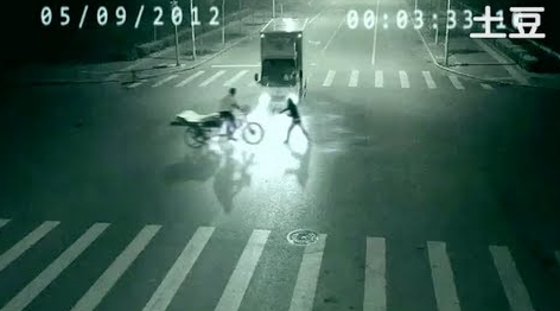 The said video shows a sleepy, cargo bicycle rider traversing the street at night somewhere in China when he crosses the path of an onrushing cargo truck, then a girl or woman who is from the opposite side of the street touches devices on her wrist and chest--which power up in an eerie bluish glow--and like a superhero with super speed, she grabs the cargo bike driver and teleports him to to the street behind the truck which slows to a stop.  The driver of the small cargo truck, steps out of his vehicle and looks around the street, wondering what happened, ignoring the passing hero-girl whose wrist gadgets stop glowing at this point.  The cargo bike driver also steps off his bike in a daze and sits on the sidewalk wondering what just happened.  All of the existing copies of the CCTV footage available right now DO NOT show the girl with wrist devices that glow an unnatural fluorescent blue light.  This was shown the first time the video came out.  Instead they show someone flashing into the the cargo bike rider like the Flash superhero with light effects but do not show the girl powering up her wrist attachments.  It looks like the video was stretched wide so that the view of the girl powering up her wrist devices could not be seen anymore.

The teleportation girl video does look too good to be true.  Debunkers point out the difference in the length of shadows of the cargo bike and the incoming cargo delivery truck as a giveaway of video editing (but we don't see it).  They also point out visible wet circles on the road that seem to disappear, a second or two after the miraculous save is completed--this part may actually have been added on by the debunkers themselves to have something to point out.  Debunkers also wonder why the driver doesn't seem to see the passing hero-girl after she saunters off from the rescue.  Both cargo truck driver and the rescued bike rider seem to be stupefied at the strangeness of what might have happened.

The people who vouched for the video as possibly real, say that the game site video is of poor quality (which may indicate a copy of the original being uploaded onto the gamesite) and are surprised that the You Tube video is actually the better copy.  When superimposed over each other, there doesn't seem to be any glaring edits that would stand out and mark the teleportation girl video as a made-up gimmick.

We think that something got captured in a CCTV traffic camera, then some people went out of their way to manipulate the video to hide the girl activating her wrist devices to a power-up glow.  Then a ruse of the video being a part of a gaming site as a simple explanation came out to cover up what may be secret technology exposed.


Video Credit:  Smile You Tube account posting
Only video post that zooms in on Chinese girl with glowing wrist device.
But scenes where she is powering up her wrists have been edited out.

Unless the gaming site comes forward about the video as part of their new game--which seems unlikely because the girl superhero on the site does not even have wrist devices like the Chinese teleportation girl in a hoodie caught in the original rescue video before it was stretched out.  This should be an interesting point to consider.  No copy of the original video showing a girl activating wrist devices to glow before rushing in to rescue the bike driver are  available online.  That should be enough to verify the CCTV as actual footage of a teleportation technology used by unknown entities who look human, and are watching out for people around us.  This may not even be a supernatural event because from what we know, Divine energies or light is not visible to electronic recording devices.

There is something going on around us and there are also efforts to mask those stray instances when people catch a whiff of what's going on and cover it up with mundane explanations so that people shrug off really exciting discoveries that may be bigger than everything we already know.
unravelling mysteries, 2012 teleportation girl video, time travel, humans from the future, angels in disguise, quantum displacement, teleportation