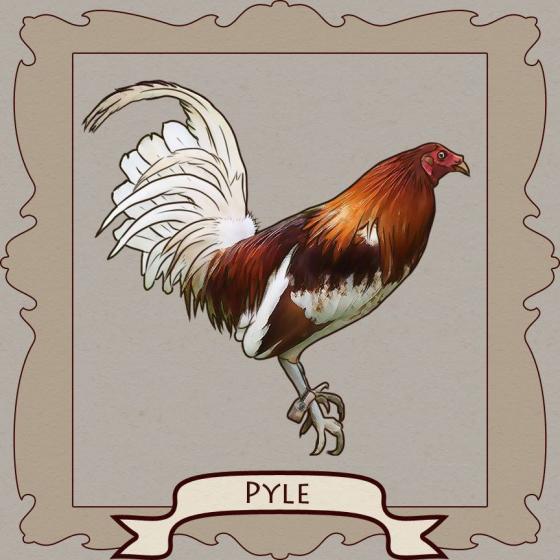 Dan Tracy was the mayor in Newburyport MA and had some off-color birds sent in from Ireland during that time.  John Colby purchased the roosters from him soon after.  He passed the pit fighting champions down to his son Lou Colby and he kept the Pyle broodstock pure.

Many Colby Pyles (Tracy Pyles) wer sold to smart breeders in John's later years.  He raised the Pyle gamefowl his whole life in Newburyport.  Pyles are notoriously difficult to breed pure because their color is a recessive gene trait in the same way that Brassbacks are also difficult to breed pure unless both cock and hen are 100 per cent pure.
Some Pyles that were crossed with other breeds came out with white legs but only the yellow legs at one time were considered the purer broodstock.  Also some of these birds are White with a small amount of reddish brown but if crossed they produce blue birds almost every time regardless of what similar broodstock they were crossed to.

Pyles were expensive running up to $250.00 for a pair of Pyles in the old days. To have such a rare breed kept pure for so long was worth it for dedicated breeders of this pit champion.  Pyles are usually straight combed.  Tracy Pyles come straight-combed and pea-comb yellow and white legged, some are all white some with a little brassback colot in the wings .
Pyle as a rule is a plumage color that denotes one that is not red, grey or black. Pyles come white, blue, dom, off-white, off-grey or off-red colors. They are white-legged or yellow-legged and straight or pea combed.

They are known for their high flying style and accurate cutting. Many are not deep game as Hatch or White hackle, but there are Pyles that are as game. Currently, they are crossed with the sturdy and hardy lines to hopefully strike the perfect blend of fighting characteristics.