October 2, 2015       How It Works
Transition Towns
Prepping and Off-Grid Works with Urban
or Suburban Settings with the
Transition Initiative
Off-grid living carries a certain stigma for some.  Local authorities are wary of isolated and barricaded individuals in the middle of nowhere stockpiling food and weapons, and righteously so.  But there is a smart and communal way of working with the system for becoming a more resilient and productive community of preppers and survivalists!

Transition towns are quietly and slowly becoming a force of their own as safe-havens from the grid and the rat race.

A transition town is a grassroots project for re-engineering any community anywhere in the world to become more resilient and survive any of the following extreme situations:  Peak Oil, Climate Destruction, and Economic Instability.  Transition towns are local communities that create a better quality of life by growing their own food, sourcing their needs locally, using alternate power and energy sources and reduce the carbon footprint of their community.  Aside from these they also dare to use their own mercantile currency to buffer any worldwide economic shocks that degrade the national currency. 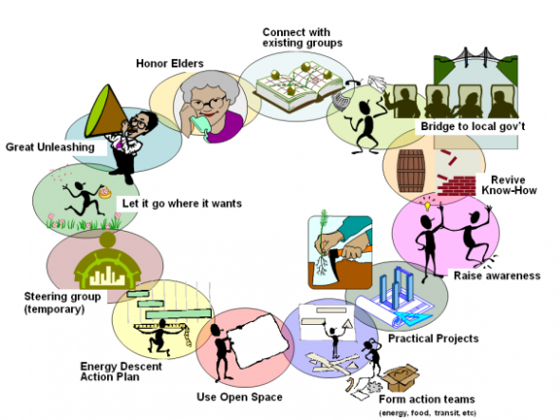 The project model has an initial '12 fiscal ingredients' or standards to qualify as a transition town.  This list is an ongoing improvement.  The first community to call itself a Transition Town was Totnes, in the U.K., founded in 2006. 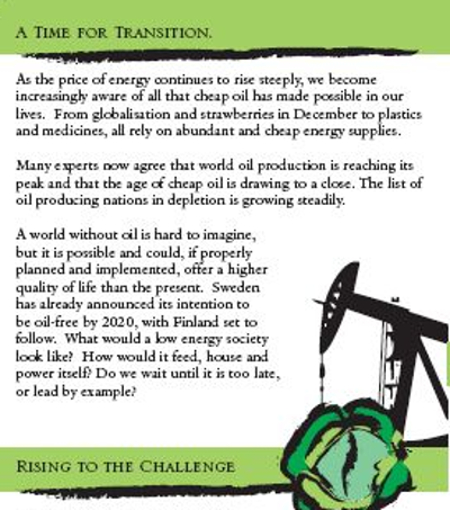 A Class Project as Blueprint for a Sustainable Future

Transition Town is an advocacy and community lifestyle that was defined by students, Louise Rooney and Catherine Dunne, in 2004 from a class project with permaculture designer Rob Hopkins at Kinsale Further Education College.  Students creatively provided blueprint solutions for adapting any community to become a self-sustaining environment in energy production, health, education, economy and agriculture if oil ever run out and known supply grids would not be able to support their communities indefinitely.  Instead of going isolationist as a survivalist and individual, transition towns let people come together and work for keeping each other safe and live better amidst brewing trouble.

Unlike in the U.S. where prepping is seen as a rogue and even subversive activity because of the stockpiling of deadly weapons and the hoarding of food of some overzealous persons with delusions of a zombie apocalypse, the transition town movement does things differently and off-grid survivalists can put together a community such as a transition initiative without worrying if it will be tagged by the local authorities as dangerous.  The transition town model can be applied to different types of places from as small a group as street neighbors, to small villages or towns, from individual cities to geographic regions, and even island communities.

The Transition Network is a UK charity founded between late 2006 and early 2007. It was set up to let people around the world learn the concept of the Transition towns and apply it to their own local communities. It has published books and films, trained people and established socio-economic circles of participation with other existing transition towns.  Transition initiatives became the be-all moniker for the variety of communities involved: from small villages (Kinsale) to neighbourhoods of cities (Portobello, Edinburgh), then from council districts (Penwith) to cities and city boroughs (Brixton).

The Transition Handbook by transition towns founder, Rob Hopkins, provides a framework on ways for any group of people to get involved in sustainable living and building local ecological resilience in the near future by creating and establishing their own transition initiative. 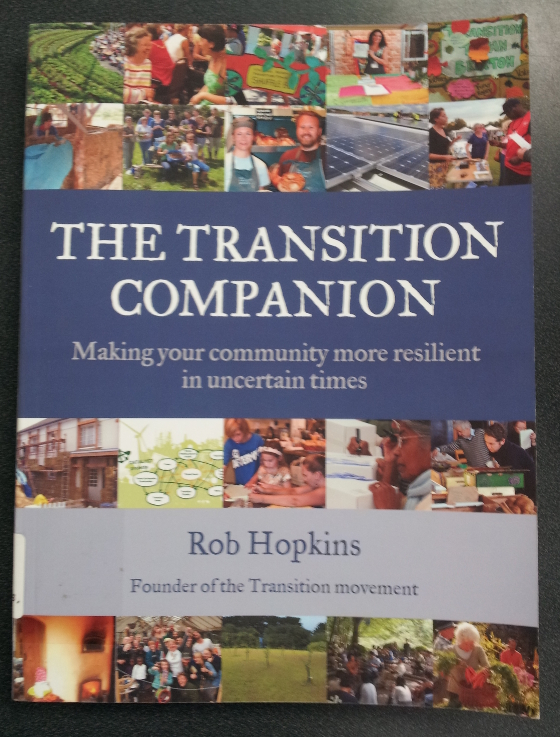 Any national supply grid endangers far-flung communities dependent on long supply chains sustained by fossil fuel technology for survival.  If the grid goes down via any extreme situation, any part of the connected communities are put into peril. Transition towns encourage people to grow their own food via local community food gardens and replace ornamental trees with fruit and nut trees as well as growing food in one's own backyard.  "Food Feet, NOT Food Miles," is their motto for staying resilient.  The high cost of shipping  or trucking in fresh produce from distant farms, some coming from across the globe may not be sustainable in the future and transition towns are built to endure even when food is no longer delivered from the traditional sources of the grid.  For a Filipino scenario for supply grid resiliency, Imagine having no veggies coming from Baguio and Bulacan, nor meat from Batangas, or fish from Navotas due to any unforseeable event.  Will your local community survive on its own?

Waste Not Want Not, Build Things to Last

Not letting anything go to waste is the holy grail for transition town people.  Transition town businesses are encouraged to develop synergy and symbiotic relationships with each other, where one's scraps and throwaways can be exchanged with another industry that needs the material discards.  Repairing old items rather than throwing them away becomes a way of life AGAIN.  Building things to last is also crucial.  The key idea making transition towns worke:  Surviving without depending on oil is a rare opportunity to reverse the tide of consumption degradation rather than a threat to the powers that be.

Redesigning the future for less dependence on oil powered grids and supply chains can really be possible.  Transition towns can still create a booming, resilient and abundant community even with very retro values and what other naysayers might consider as stranger frugal means.  Who has their stuff repaired in this age?  Transition town people, of course.

A very unconventional means for reducing threats from global financial crisis to local communities was the transition initiatives' decision to circulate and promote localized alternate currency that complements the national currencies.  Local money is used as a way of creating sustainable economies within the community and with networks in other towns that accept the new instruments. 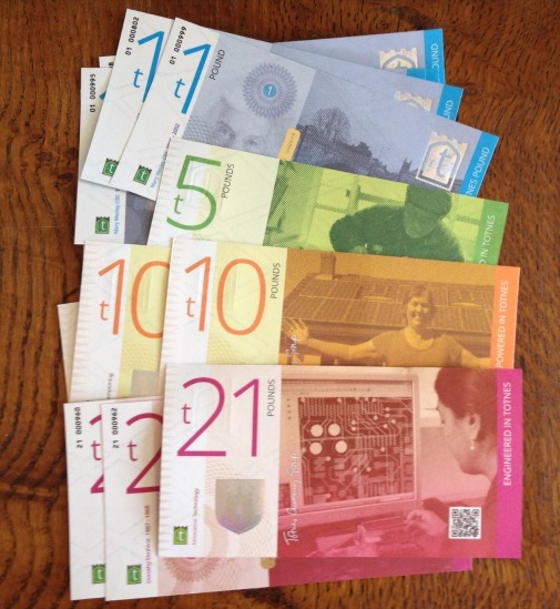 Images are copyright and IP of Totnes pound CIC in the UK and come from
the totnespound.org website and are used for review purposes only.

Pioneer transition town, Totnes has introduced its own local currency, the Totnes pound, an alternative currency to the legal tender British pound, but the money IS ONLY is redeemable in local Totnes shops and businesses or in places that SUPPORT the plan to keep mercantile exchanges flexible..

The Totnes pound is used to help reduce "food miles" (the cost for shipping in fresh food from long distance sources) and also support the businesses of local firms in the community.  Another transition town, Brixton, even prides itself in putting figures it reveres on its alternate currency:  from David Bowie to black African activists. 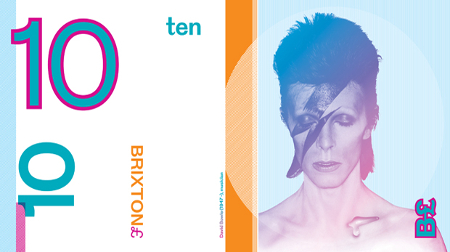 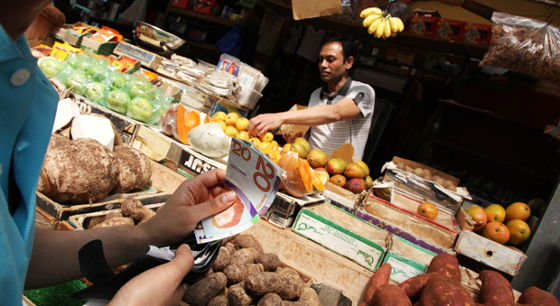 Above images are copyright and IP of Brixton pound CIC in the UK
from the brixtonpound.org website and used for review purposes only.
The Brixton pound is used as alternate currency and is accepted
as legal tender by participating businesses in the Brixton Transition
Town community as well as the Transition Network of
communities in England.

Check out both  totnespound.org and brixtonpound.org for details about alternate currency as a means for  buffering a local community from exchange rate fluctuations and keeping local businesses alive and unaffected by anything that shuts down the national supply grid or the national financial integrity.

This kind of alternate currency initiative in transition town communities might be deemed illegal in particular countries in the world with very strict fiscal economic sanctions in place regarding currency and any form of bank notes used as acceptable currency.

But it is heartening to note that most first world nations are hitting stride with their transition town communities being allowed to experiment with a way of life that actually works for the participating locals and networks.