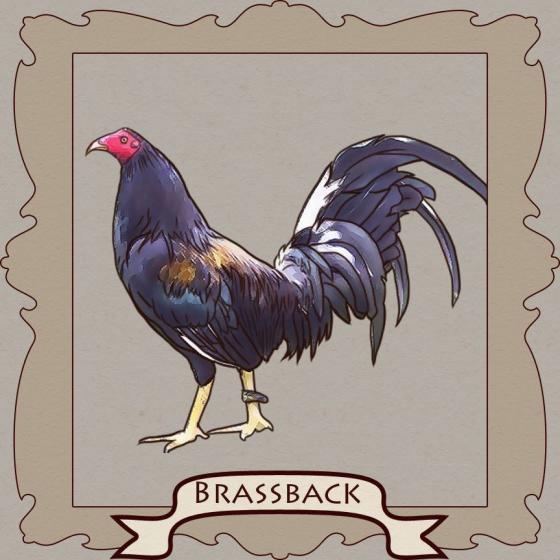 Brassbacks are off-color Alabany or Warhorse gamefowl that have been bred as pure recessives for color, but which still retain the advantages of pure Albany and Warhorse pure broodstock fighting tratis.  Sometimes the Brassback fights even better than the pure bloodline.

When crossing Brassback for its color or spangle, a 50/50 cross still has difficulty reproducing the parent Brassback color and even a 3/4 Brassback cross has a tough time producing spangle featherd offspring just because the gene is a recessive trait that you really need a pure broodstock match of 100 per cent Brassback cock to hen match to produce the Brassback color.
Brassback Albanies or Warhorses are a spangle tail bloodline that is known to be one of the most explosive fighting cocks.  They are fast (Warhorse Brown Red traits), are grounders, they are shufflers and are power hitters despite throwing many hits.  Fans swear that the Brassback can hit harder than even good Hatches.  They are traditionally known for gameness and deep cutting skills.


Fighintg Style:
Brassback fowl do not run from a fight, even with a broken wing or leg or a blinded eye, they will chase their opponent until they kill it, even in a drag fight.  Sometimes, this fighting spirit is what sustains a Brassback and lets it pull off a win inspite of injuries sustained during a fight.  They can outlast even modern gamefowl opponents.  Despite being extremely hostile to other roosters, Brassback are very tame with humans and are gentle and very easy to handle and train.