August 4, 2016       How It Works
Natural Engineering:
For Smarter Flood Control and
Replenishing Community Cisterns
In the megacity of Metro Manila, the low-lying areas of Marikina, Malabon, parts of Manila, parts of Caloocan and even Quezon City are often flood endangered areas.  Highland water runoffs and overflows of nearby waterways from heavy storms and torrential monsoon rains can cause disastrous flooding in both business and residential areas and few solutions so far have been effective.  Even in Philippine provinces like Aurora and areas with sprawling flood plain valleys like Bulacan, Laguna--flooding is a perennial disaster that local flood control experts can avoid by using natural engineering methods to minimize runoffs or direct downpour build-up of rainwater. 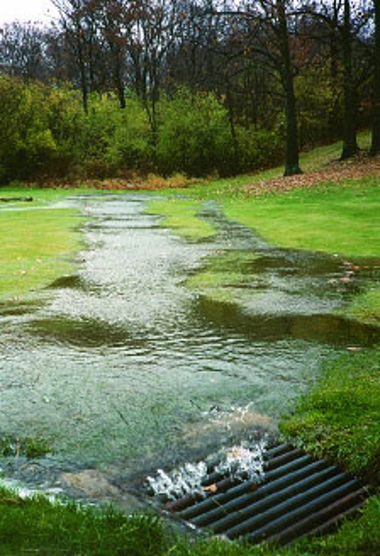 We might take heed from a study in the U.K. that has been looking into creating natural flood control solutions as opposed to artificial flood control measures to either reduce the amount of runoff into waterways from higher ground and to funnel excess water from waterways into catch basins and water traps.  In addition to the U.K. study, Filipinos are in dire need to use all of that rainwater as a resource for filling community cisterns and have a ready water source available for off-grid situations and as a green technology for future generations to benefit from.  In Singapore, two-thirds of that city-state's land area is devoted to catchment basins for monsoon season rainwater which supplies most of the ASEAN country's drinking water. 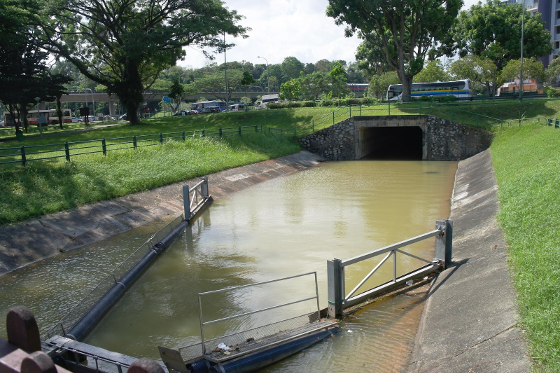 Image Credit:  angel'sfanclub likebosses   blog image for Singapore Water field trip
In Singapore, the entire city's catchment and drain system
is piped into 7 reservoirs for processing drinking water--reducing
flood incidence and creating a resource.  What works in
natural engineering may be applied in urban setting
as artificial systems better than pumping stations.

Experts from Newcastle University in partnership with the Environment Agency in the U.K., have conducted trials of a five-year research project that uses Natural Engineering flood control measures--it was a study run by an organization called The Flow Partnership Project.

Other countries like Japan also have their own natural engineering solutions against flooding which include using the terrain's natural defenses as the most cost effective flood control technology.

Knowing how our terrain is affected by what happens at higher ground can help engineers plan better solutions for controlling or slowing down rainfall runoffs into rivers or slowing stagnant buildup of runoffs
into low level areas.
First Step: Knowing the Land

The U.K. natural engineering team used upstream Belford Burn in Northumberland, where heavy storms dump most of its water, as their pilot area for landscape tweaks to change the natural flow of rainwater runoffs.  They built small catchment systems to let part of the runoffs flow into them.  The team put in rainfall traps--small pond size diggings to store plenty of water and restrict the volume going down the river.  For pathways that speed up the build up of water in the lowlands, the engineers disconnected those funnels to further slow down water build up.  The study has been published in the journal Science of the Total Environment, the results of the study already presented to the U.K.'s Commons Office of Science and Technology.

What can we get out of the U.K. study?  All the measures tried by the British were designed to lower the amount of runoff water going into the lowlands so that even if there was flooding, the waterline of the flood would not be too high and the build up of flood waters in low lying areas would be significantly slowed down to help communities have more time to prepare once flood warning is given.  Redirecting water runoffs into a catchment was one major engineering solution the team tried that worked.  Instead of tweaking the overworked pumping stations, it might be cheaper to check the water buildup threat from higher ground and just use natural engineering solutions. 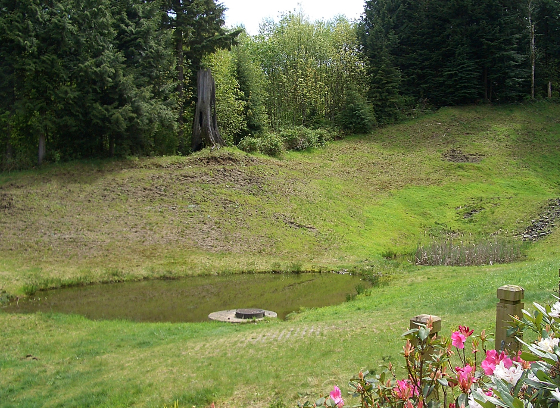 Image Credit:  Vladimir Menkov  for Wiki Commons CC BY-SA 3.0
Runoffs from a hilly woods are trapped in ponds to reduce
the volume of water going downhill into the lowlands. 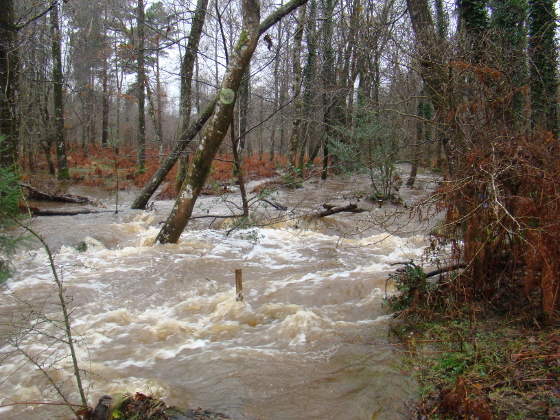 A study on big trees affecting state of runoff flows to lowlands. 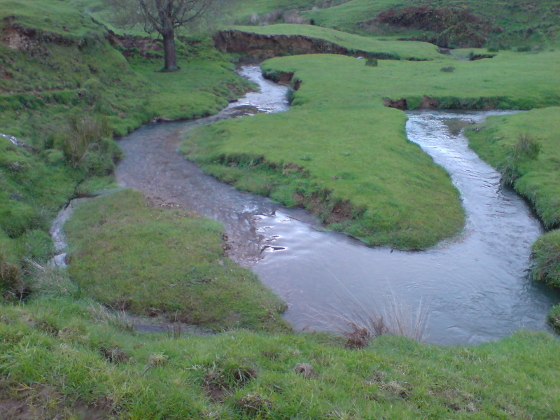 Upland streams and rivers can be re-meandered or redirected to
snake around bends (meanders) so that the flow of runoffs is
slowed down instead of gushing in a straight line for the lowlands. 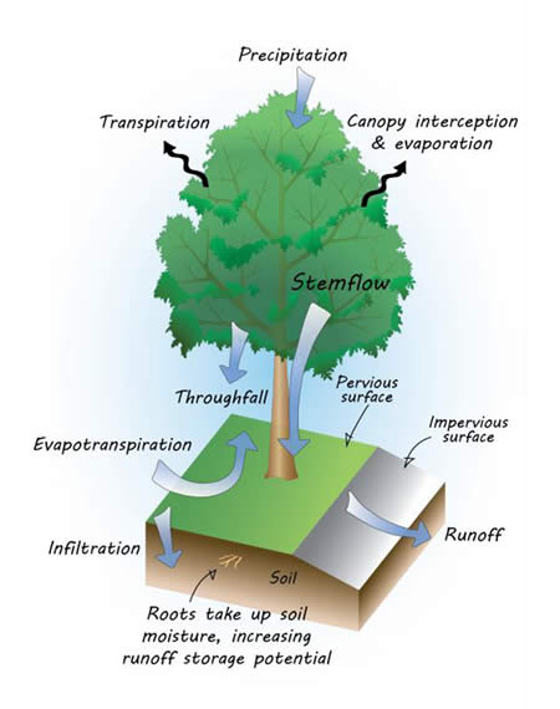 Image Credit:  EPA.gov/soakuptherain
Savings from Natural Engineering Flood Control
Costing around UK200,000 pounds, the Belford experiment was chosen over a full engineering works of dikes and pumping stations for the town which would have cost them a huge UK 2.5 million pounds.

Success of any natural engineering project may only happen if the local communities cooperate and the local landowners support all the systems set in place according to the U.K. team that implemented the project--like allowing ponds and catch basins to exist near communities, planting a tree forest cluster in specific areas by design and tending to them as a flood control solution.

Not Going to Stop Extreme Floods plus Rethink Rainwater as Resource

Natural engineering is still not a fool-proof solution to massive river overflows.  The system itself can still be overwhelmed by extreme weather conditions.  Low-cost, natural flood contro solutionsl provide smart and simple alternatives that can help the local government save money and help people in flood prone communities.  The re-assigning of rainwater as a resource that should be harvested should also be immediately considered  in spite of all vested interests in piped water companies so that each community in the country has an off-grid replenishable source of drinking water.  If the water grid goes down, all the high rise condominiums and buildings in dense urban areas are death traps and mausoleums without a source of drinking water.