One of the most popular extreme metal drummers of today, Hannes Grossmann plays with German progressive band Alkaloid as well as U.S. technical extreme metal super group Blotted Science. Hannes may be more familiar to death metal fans as the drummer of Necrophagist's Epitaph era and he also played with Obscura.

In a very entertaining and insightful interview with Drumtalk on their You Tube channel, Hannes Grossmann gave fans an in-depth look at what it’s like to think and compose like a drummer in an extreme metal band. REACH gets to talk to Hannes about going indie and some insights into his craft. 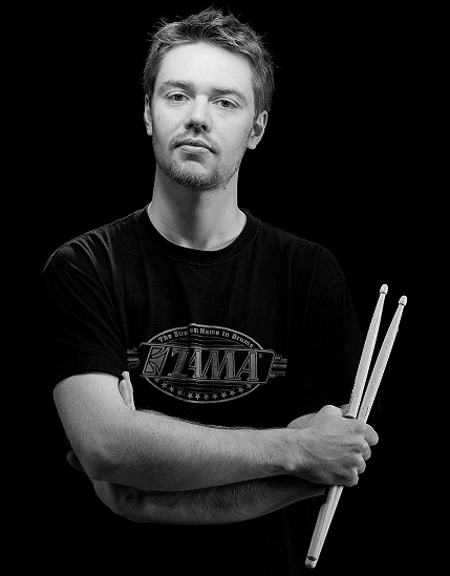 The first successful craft musician in the rock-slash-metal genre may have been Jimi Hendrix in the 70s. In the 80s and 90s, guitar virtuosos like Yngwie J. Malmsteen put out solo albums with their own bands (Rising Force), then others followed suit like Joe Satriani and Steve Vai. But rock and metal drummers going solo at that time were rare. Jazz drummers like Dave Weckl (Madonna) were more prolific at releasing solo projects that showcased their technique and prowess. Making the drums a showpiece of the album.

It feels like death metal has come into its own as a genre for enjoying both music craft and playing skils and not just the juvenile association with the occult—which is just flavor. It is an exciting time to be a music fan of extreme metal drumming today.
REACH:   As a kid growing up and learning craft, which songs would you practice to? Some drummers would say Master of Puppets by Metallica. We see kids as young as 12 years old on You Tube nowadays doing a cover of Painkiller (Scott Travis) by Judas Priest or Subdivisions (Neil Peart) by Rush. Did you go working beat blasts from Napalm Death as a kid or work other metal drummer influences? Do you even like Guitar Hero stuff like Dragonforce who broke out huge because of that video game? Is there an extreme metal or rock drumming video game out that we don’t know of? Would you want to be part of that kind of project?

Hannes:  By the time I started playing the drums there were no games like Guitar Hero, actually even YouTube didn't exist. I had to buy or copy drum videos – yes, on tape, DVDs weren't there too – from better known drummers who had instructional videos out, like Dave Weckl or Dennis Chambers. I tried to copy those guys as best as I could. Fusion drumming was a big influence therefore. I didn't really listen to Jazz though, I was more interested in heavier Rock and then Metal later on. But I didn't really play to songs or did covers of any kind. From an early stage on I was looking for people to play with. I had my first band when I was 12, so that was always my “training”.  If any video game was based on that experience, I'd love to be a part of it. 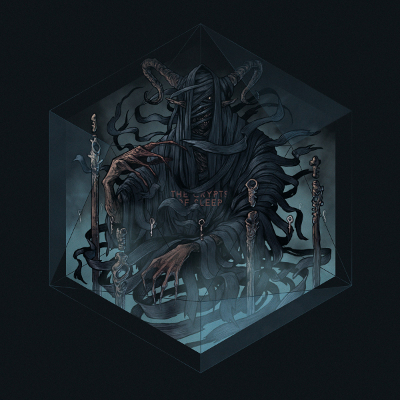 Image Credit:  Hannes Grossman (used with permission)
Album Cover to Crypts of Sleep CD.
REACH:   How long did it take you to figure out that going solo (The Radial Covennant and Crypts of Sleep) would really help you make DIY projects successful? Crowdfunding is now even better than relying on labels to break you onto the music scene. Does this work for unheralded but talented kids too or does it just work amazingly better for renowned metal drummers?

Hannes:  I don't think that crowdfunding really works for bands that don't have a name out there already. And even if you do, successful crowdfunding requires a lot of work. It's not enough to just record your music and put it on your website. You need to put together perks which are interesting, you need to follow up with all customer orders and the whole production, which requires tremendous amounts of work. Then you need to advertise it and make yourself become a brand. It requires hundreds of hours to make a campaign successful, something you don't need to deal with when you're working with a label.

My campaigns were pretty successful because I put a lot of work into it and I already had many fans and followers. The only reason I crowdfunded and self-released my first record was because I got very frustrated in Obscura. I thought I'm better off musically and personally when going solo and focusing on Alkaloid and my Mordor Sounds recording studio, which was a great decision in the end. 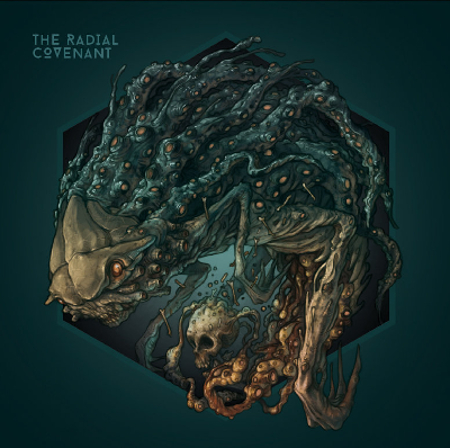 Image Credit:  Hannes Grossman (used with permission)
Album Cover to The Radial Covenant CD.
REACH:   Technical death metal is lovely to listen to. In the same manner that fans of progressive jazz bands or that band that sings Soul with a Capital S—fans of technical musicianship hear everything at the same time and they hear each part as a whole of its own, even when everything seems to be anarchic and busy—as you've said. The overall impact is still hypnotic aka headbang inducing--that you can actually groove to the profanity (chaotic nature) of it all. Are music arrangements in this genre naturally counterpoint to achieve that effect, or be called technical? Or is it just using odd timing and orchestration to create grooves that hook listeners out of all the riff blasts and blast beats.

Hannes:  To be honest, I don't know. I really don't listen to 99% of the so-called technical death metal. Mostly I feel that bands of this category just play a lot of notes for the sake of it, but there are exceptions of course.

For my own music I don't think in categories like this and I don't see my music being “tech death”, even though it probably is. But none of my influences other than the bands I've played with are part of the technical death metal community. When writing music I focus a lot on arrangements and consider a song as perfect when you can't leave away anything without compromising the song itself. 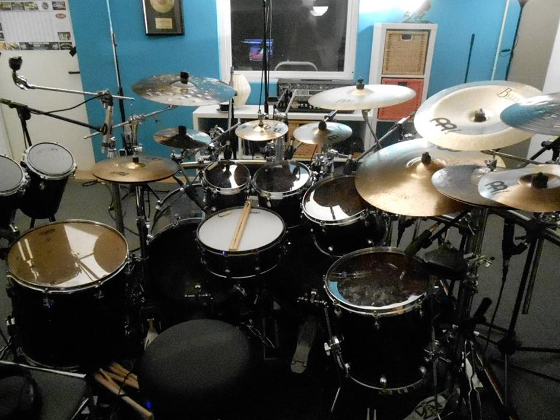 Hannes:  To be honest I never heard about this concept, but it sounds highly interesting. If I wanted to write songs like that I'd have to learn the concept first and then develop writing skills to use this style of composing. Therefore I don't have any idea yet how I could approach it now, I'm sorry.


Video Credit:  Drumtalk You Tube channel
REACH: You journey as a musician going from some of the most recognized technical death metal bands to playing solo in your own outfit serve as an inspiration and holy grail for other kids who want to wear the same shoes as you. How much time do you put in to learn to master your craft? How do you avoid the wrist or arm injuries that come with a fast drumming technique?

Then in Obscura I wrote the biggest chunk of the music and of course did the drum arrangement. My involvement in Necrophagist was beneficial for that in multiple ways. So I really recommend to search for other people to play with.  Join a band in which you're the worst musician, so you need to work, get better and finally catch up with the people you play with. Use your new skills for new things and try to develop. That's the core of every true art.

REACH: Your interview with Drumtalk was awesome! It was a good look inside the thinking behind the music craft of a drummer composing and arranging the spine of technical death metal. You mentioned that it is tough as it is trying to fit everything good in each song because you pare it down to very precise groove designs that do not overwhelm the listener but not castrate songs if you pare down too much. Can you give us readers more song examples where we can hear that everything (I’d say Stabwound and Two-pound Torch) fits just right ? (in the Drumtalk interview, Hannes pointed at Phil Collins opening up songs by varying arrangements) And maybe, if you dare, mention any songs (whatever genre you can mention even if it is not extreme metal) where we can hear that that song got castrated or could have been better?

Hannes:  I think a great example for drum composition is Rush's music and Neil Peart's drum arrangements. However, what fits and what does not is really  something very individual. It's based a lot on personal preference.

What I feel is not fitting for a song might sound perfect to somebody else. There are no general rules for what fits best in a certain situation. There are just guidelines that you can follow. I think in a lot of pop music they focus so much on the voice that other instruments do too little. But I don't wanna mention any songs, that would be unfair and arrogant. Which I like to think I'm not, haha.