Home  »  How It Works  »  Extreme Weather: How Typhoons Form and BECOME Devastator 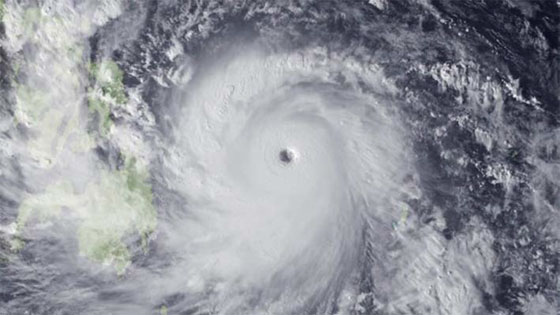 Storm surge.
noun
noun: storm surge; plural noun: storm surges
The worst part of Typhoon Yolanda, which may have taken as many as 10,000 people in the Philippines, was storm surge.  The highest sustained tropical cyclone winds in history were recorded at 195 miles per hour (314 km/h) in that typhoon.  Unlike the infamous Ondoy and Habagat typhoons which drew monsoon rains to amplify the rainfall in Metro Manila to Noah’s flood proportions, Yolanda forced the seawater to rise and flood the southern coastal communities and literally smash entire towns to detritus.
Extreme winds forced the seawaters to rush inland like a bulldozer because the sea-level rise from the climate change has been ongoing four to five times faster in the eastern Philippines.  Surging waters devastated weak structures like they were just a box of twigs, and even smashing concrete houses that have not been reinforced with steel.  The floods caught people unawares and strong undercurrents dragged many under.
The storm surge was greatest in Tacloban City, a coastal community where the Leyte Gulf narrows into the San Pedro and San Pablo Bay.  Like sitting ducks were everyone who chose to dig in and stay.  Carl Drews, of the National Center for Atmospheric Research in Colorado described the area: “That is about the worst path and the worst place for a storm surge."
Trade winds and currents have been piling up more water in the western Pacific, according to William Sweet, oceanographer from National Oceanic and Atmospheric Administration.
To survive calamity, a country needs a culture of prevention, rather than disaster relief,” advised PRC Chairman Richard Gordon. 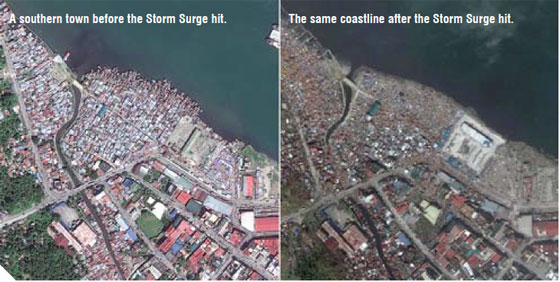 Seven Main Factors that Brew a Super Typhoon:
These conditions do not necessarily guarantee that a super typhoon will form. Warm waters create the warm core that fuels tropical systems.  A distance of 500 km (300 mi) from the equator is where tropical cyclogenesis brews.  About 85 to 90 percent of Pacific typhoons form within the monsoon trough.   Nearly one-third of the world\'s tropical cyclones start in the western Pacific.
The most frequently impacted areas of the Philippines by tropical cyclones are northern and central Luzon and eastern Visayas.  Thirty percent of the annual rainfall in the northern Philippines could be traced to super typhoon, while the southern islands receive less than 10 percent of their annual rainfall from tropical cyclones.
STORM SURGE SURVIVAL TIPS
This is a survival guide that REACH will always reprint whenever storm season is underway.  Better safe than sorry.  Always.
Philippine Red Cross (PRC) Typhoon Survival Guidelines
Before the Storm
During the Storm
After the Typhoon