January 13, 2016       Unravelling Mysteries
Godtype's own
Bible Code:
A Website's Pattern Research Reveals
A Finite Time Map of Man's Years on Earth
With all the ruckus coming from the Mayan Calendar supposedly marking the end of time or a new age of man, plus the recent 4 blood moons signaling a worldwide event to come that might affect the nation of Israel, we come across a better look at end-of-times prophecy--the Godtype website.

Image Credit: Milton Fleitas for Godtype website, used for review purposes.
A graphic from the Godtype website showing timeilnes
of historical empires, each rising and falling every 520 years.

Using pattern research and context translation to reveal very definitive facts that can actually be cross-checked with historical data, Godtype has a proposal that man's timeline as a species is already codified in the Bible.  Most forboding among the data interpretations is that man's time on the earth as a species is actually finite.  This might behoove geek-atheists hoping for a Carl Sagan-like Cosmos future where man colonizes the stars.  Sorry kids, according to Godtype, it ain't in the books.

The Godtype website uses scientific pattern research to reveal very unusual yet interesting insights that the lay believer should always take with a grain of salt.  For understanding a point of view often dismissed as charlatan by the powers-that-be aka religious dogmatists.  But Godttype actually provides clearer explanations than just the 'sublime recapitulation' offered by flawed-logic, church dogmatists. 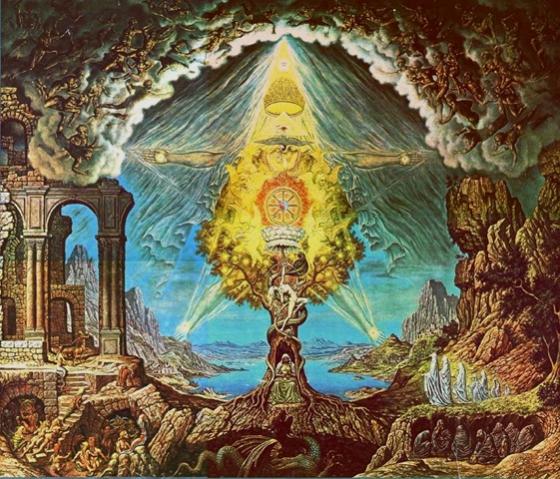 A surrealist painting by Johfra Bosschart depicting
the Apocalypse as an allegorical 'lifting of the veil.'

If the Word of God held so much power and understanding if it leads us closer to the 'Apocalypse' (in Greek meaning 'a lifting of the veil'), the Godtype pattern research and timeline analysis are definitely worth studying.  Fundamentalist creationists often decry scientists and mathematicians as blinded by what they can only observe, but they are ignorant that the creator is an intelligent designer himself who CAN be seen as such in the mathematical design and sacred geometry of everything He made. 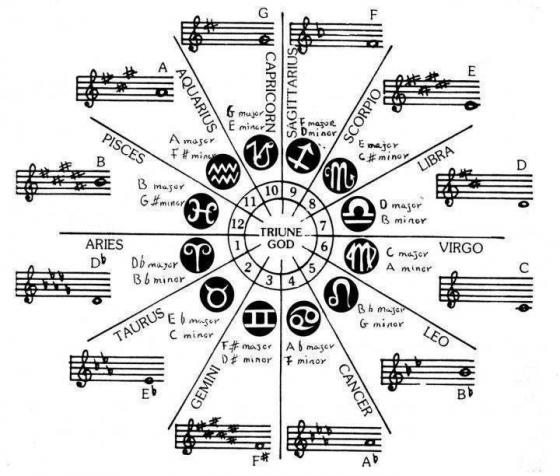 Scientists have observed heavenly bodies as actually
having a unique sonic vibration that can be observed,
giving the Music of the Spheres more credence as a
field of study than just pseudo-science.

The sacred cubit and geometry are more than just fanciful medieval esoterica.  Previously dismissed by Carl Sagan in his show Cosmos as mere pseudo-science supplanted by more empirical methods, today, both Sacred Geometry and the Music of the Spheres by Johannes Kepler are now being recognized by quantum scientists as closer to the truth than just vain and misguided research.  They were crucial pieces of a puzzle now being worked out by physicists for a grand Unified Theory.

By the studying of quantum mechanics and math involved and supposedly encoded both explicitly and implicitly in the Word of God, many researchers are now finding out what a 'lifting of the veil' is.  In Godtype, many Bible codes embedded in Scripture have been deciphered via pattern research:

Genesis 6:3 is reinterpreted by Godtype as "Time (man's years) having a limit of “Energy” (My Spirit)– 12,000 years--the length of time humans may exist in God's measure of time (the reason for a 12 base measuring system instituted by our Creator).  Interpreted by most theologists as a 120 year life span after the flood, the text may be more accurate as translated by the Godtype website which cross reference a passage from Psalms accurately describing the lifetime of man as 70 years.

The Godtype describes mankind's existence itself as a very quantifiable number rather than time existing apart from humankind's existence.  Exact dates coinciding with Biblical prophecy have been interpreted by Godtype pattern research just recently and when plotted according to the cipher for the 50 year Jubilee cycles and the 12,000 year timeline, they all coincide with uncanny accuracy with the biblical mentioned dates which include the Cycles of Daniel’s writing on the wall.

The Bible IS Our Creator's Time Map

The Chapters / Verses of the Bible actually encode time as we know it. The chapters which represent Time as we understand – “Past, Present, Future, Eternity” calculate to PI to 5 decimal places as proposed by the Godtype research.

Sacred geometry is actually derived from Biblical data, particularly from the Book of Numbers, which on the surface reads like mere measurements of a holy temple: The Temple of Jerusalem.  Interestingly, pattern researchers have marked more than several coinciding exact measures embedded and derived from close study of those temple measurements: from cosmic distances such as the distance from the earth to the sun, even the exact measure of the speed of light.

Every scientific measure has already been indicated in the Bible in one form or another, and pattern research by the Godtype website has slowly shown each of these facts as encoded in Scripture.

Mene Mene Tekel Upharsen described as 'The Writing on the Wall'  in  the  Book  of  Daniel  has  been reinterpreted by the Godtype website as a timeline for civilizations that followed the Babylonian empire.  A map of time and existence as well as duration for any dominant society throughout human existence.
Mene Mene (Infinity) Tekel (520 years) Upharsen (is measured by) is read according to Hebrew definition per word as: Time is measured and divided by cycles of 520 years!

To prove this assertion, Godtype has provided a timeline of the “Cycles of Empires” across known history which it also identifies as the Eight Kings of John’s revelation.  From the time the message was revealed to King Belshezzar of Babylon, ALL empires that followed Babylon were subject to a finite 260 to 520 year timeline, each rising or falling and giving way to the next nation. 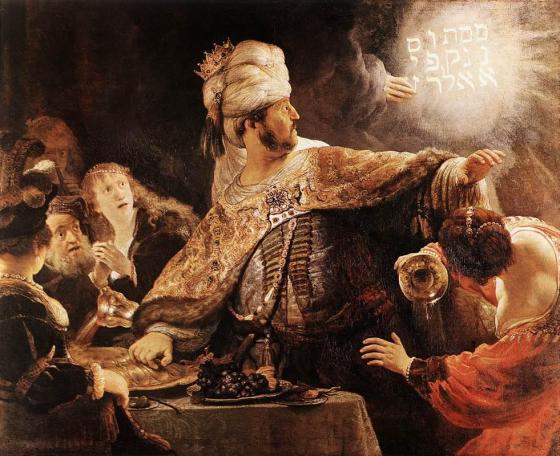 Godtype offers speculation that this 'measure' was effected by the Lord to avoid the mistake of one civilization having too much power.  A lesson from Him where a 'worldwide flood' was needed to save mankind.  When 'wickedness' by a powerful empire nearly caused the earth to be destroyed...and the Lord snuck in an escape thru Noah and his family to survive and seed the next generation of men.
So far, no nation has come into power for too long that it could affect the entire world in a cataclysmic manner ever since the period of the Rama empire and the legend of Atlantis.

The Godtype website offers plenty of trivia that may strengthen one's faith and understand our Creator as someone who wanted us to fathom the depth and beauty of His creation, unlike what most religious dogmatists teach:  blind faith in the unfathomable.  When the lay person can understand how great the Lord is, maybe they can stop overcrowding a soot blackened statue safely stored in Quiapo church and start READING the good book to truly understand and live the life that the Lord teaches us to live.

And even for those who do not believe in a supreme being, Godtype's analysis offers a very illuminating description of the possible secrets contained in religious canon.
unravelling mysteries