Adam’s Calendar is the most distinctive physical marker among millions of stone ruins in South African area of Maputo.  It is supposed to be the world's oldest cosmic stone calendar for indicating the seasons and times of the year as well as a navigational aid for star mapping for ancient dwellers in the area.  Most of the circular, glyph-pattern stone structures were in the past assumed to be tribal ruins from past African communities.  But the fused-quartz, stone constructs mark a grid of ancient roads, possible agricultural terraces and most importantly: thousands of gold mines--to indicate some ancient industiral mining community with possible advanced sound technology for levitating heavy stones and gold. 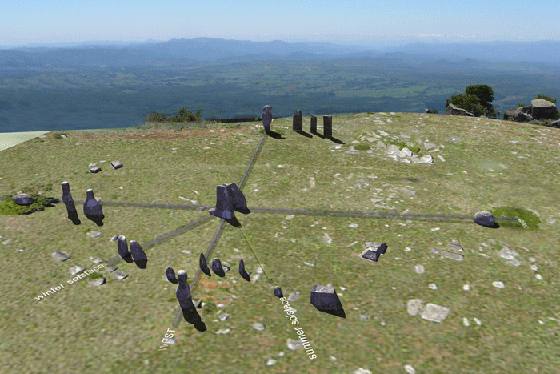 Michael Tellinger is the author and researcher who claims that all of these stone circle glyph structures actually belong to a vanished civilization, which he also connects to Zachariah Sitchin's Annunaki.  A joint investigation with Johan Heine, a local pilot, has helped Tellinger make a draft map of the area to see the extent of the ancient grid of stone foundations and what they may indicate when studied as possible remnants of an advanced civilization that may have existed in prehistoric times.

The “stone settlements” cover most of southern Africa, west of the port of Maputo, in a remote region 150 miles inland, a sprawl of archaeological remnants of an ancient city cover a possible 1500 square miles.  Rogue scientists and archaeologists checking the area estimate that this is part of an even bigger grid of 10,000 square miles that may have been fluorishing 160,000 to 200,000 BCE. Local farmers had assumed all of these stone glyph patterns were made by indigenous African peoples from the past and never bothered to check their archaeological significance. 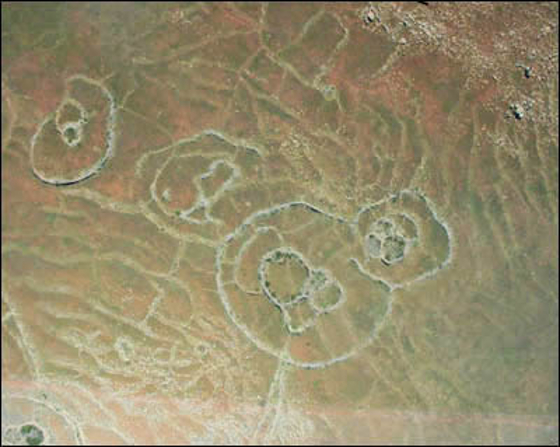 From above, the glyph stone circles look like a circuit or grid extending to the next
stone circle arrangements sprawling all over Africa for almost 100,000 and counting.

Checking closer, Michael Tellinger along with scientist researchers discovered phallic and fluted fused-quartz tools along with the limestone and quartz make-up of most of the stone ruins.  Further studies indicated that the shape of each circular stone glyph may have been a physical representation of a sound frequency, the way meditating monks sound out mantra vocalizations like 'om,' 'um,' and similar possible musical tones.

Tellinger speculates that these structures vibrated energies from within the earth that could be amplified by advanced sound tools like the phallic and fluted -fused-quartz tools to levitate stones, create anti-gravity fields and local electricity and more.  Each sound marker may correspond to a particular energy signature or orgone energy well deep in the earth.  The markers may also have functioned as a relay communication system like what Stonehenge is believed to be, striking the stones may produce certain tones that would reverberate across the distance like morse code for messages.

To prove his theory, Michael Tellinger had doubting scientists go near the structures with their GPS devices and check if their mobile gadgets still functioned.  The perfectly working GPS devices conked out once they were very near the structures and lost their signal within the vicinity of the stone circles for no reason at all.  Michael Tellinger theorizes that ALL of these glyphs were somehow part of a local power grid tapped into the earth's own orgone energy and were destroyed or ruined by the worldwide flood.  Each stone circle may be producing electromagnetic energy that may interfere with any electronic device's signal reception.

Each stone circle structure is said to be a physical glyph of the sound energy that
can be emitted from its location, like tonal melodies.

Tellinger has many references to the Annunaki, and may even come off as less scientific but other researchers who have covered the area over the last 20 years like his pilot partner Johan Heine, Cyril Hromnik and Richard Wade have also proposed that the unusual stone remains are ancient astronomical observatories of a prehistoric, highly advanced, lost civilization.  Overhead satellite photography has mapped the circular glyph structures over a vast geographical area, some barely noticeable or covered by soil erosion.  Some still fairly intact and showing good sized structures of up to five feet high and over a meter wide.

Michael Tellinger proposes a international effort to rediscover the power of this dormant grid of fused-quartz, circular glyph structures and end the wasteful and destructive manner that capitalism has eroded the earth's resources and humanity's morals. 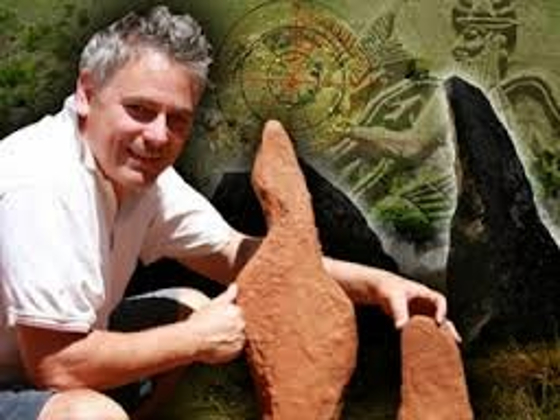 Michael Tellinger and fluted fused-quartz sound tools found in South Africa
Although Tellinger is a radical activist crusading against capitalist banks and financial systems with his Ubuntu Earth movement, this spectacular rediscovery in South Africa of ancient ruins has attracted attention to the possibility that everything we know may not be how the earth evolved over time--from the stone age to modern times.