July 22, 2015       Arts and Culture
Pop Culture Fix:
The Fairytale Retelling
Darker Stories and Realms of Heroines
and Monsters Make Waves
Just when coloring books are being made for grown-ups.  So are fairy tales!.  Fantasy and myth has gone back to its dark origins.  The current pop culture fairy tale revival is exploring more exotic flavors than sugar, spice and nice:  anti-heroes, sexual awakening, kick-ass heroines, and anti-establishment themes.  The resurgence of the darker retelling of fairy tales over the past 6 years or so indicates that dark fantasy is not just a flavor of the season theme.  Like superhero comic book movies, noir fairy tales have become one of the most appealing changes for what used to be fluff entertainment. 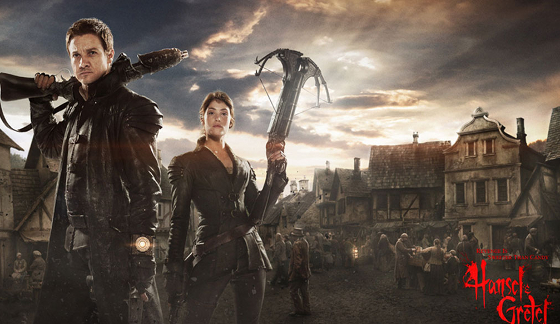 Hansel and Gretel in the modern film retelling are two Witch Hunters
toting steampunk shotguns and crossbows, and cleanse the land of
rotting witches.  The film may be camp but it explores a dark
side of fairy tale storytelling.
Even when some movies turn out to be weaker at the tills, it really hasn't stopped movie makers from mining the darker fairy tale vein for even more film ideas.  Studios may recover most of the cost of making the movies off DVD sales for families collecting good AND scary, ageless fantasy for their kids.

Fairy tale entertainment going back to the last 6 years are going for alternate retellings  Darker stories for grown-ups and young adults that feature the same characters in a different light:  As Evil queens turning saviour.  Similar to the grim roots of the original texts from the Victorian era, the characters are portrayed as dark protagonists or spunkier urchins instead of the helpless, cookie-cutter damsels from the Disney of the 50s.

Old favorite: Red Riding Hood was remade as a coming-of-age tale
for a young lady whose desires were awakened by the werewolf
lord plaguing a medieval town. 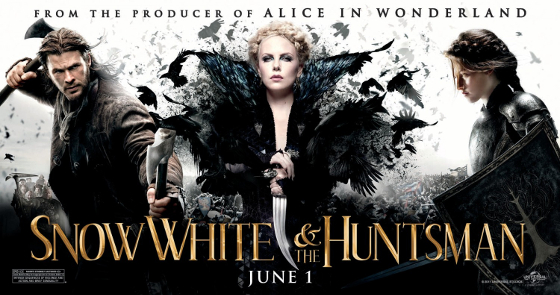 Snow White is a rebellious princess who takes back her kingdom
from a usurper: the evil witch twin sister and her evil twin brother.
In mainstream pop culture, such darker retellings are of course still presented within the context of an entertaining story.  Not just as explicit content for schlock value.  The generation that grew up on Harry Potter over the last 2 decades is now coming into its own and looking for stories with more mature themes.  In fact, thanks to the success of Harry Potter across all pop media platforms, people of all ages can now read or watch a fairy tale story without being ashamed of enjoying fantasy books.

Advances in digital imaging has also made video, TV and film Fairy Tales, as well as the new marketing gimmick known as book trailers, even more amazing than before.  Fairy Tale movies today are worth all the price of a 3D iMax ticket, and may giving a boost to the hardware side: film merchandise.  Most book trailers today are souped-up mini-movies about what a novel may offer its readers.  Publishing houses are going all out to make sure kids are hooked when they see a fairy tale YA book coming out--like the current bestseller, The School of Good and Evil ( also a movie in the making).  People who flock to any fairy tale movie or watch a fairy tale TV series, or see a YA fairy tale book trailer want to experience that story over and over and share it with friends and kids.

Here is a look at some TV series and recent novels that work off fairy tale retellings steeped in darker themes...
Once Upon A Time the TV Series

A Disney TV fairy tale series flavored with noir stories !  The Evil Queen (aka Maleficent) successfully robs all the characters from fables and fairy tales of their memories and transports them into modern day Maine as ordinary people.  She is mayor of the town too.  Only Snow White and Prince Charming's child can break the curse because she escaped the curse before the Evil Queen caught up to her.  She's spirited away into the human world by her parents so she may one day redeem all of fairytale land.  Currently in its fourth season, Disney has even put in Elsa from Frozen as one of the continuing characters. 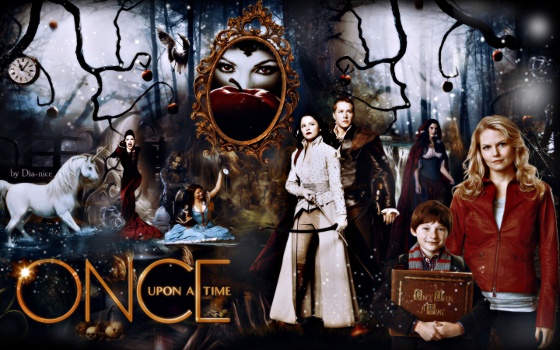 Fairy tale fans might guffaw at this choice.  Being a horror TV series.   But mind you, the show uses the  Fae as its tribal motif, and features the dark world of mythological creatures from all world cultures as its cast of characters.  The show's tone is often light and with lots of humor--like fairy tales. 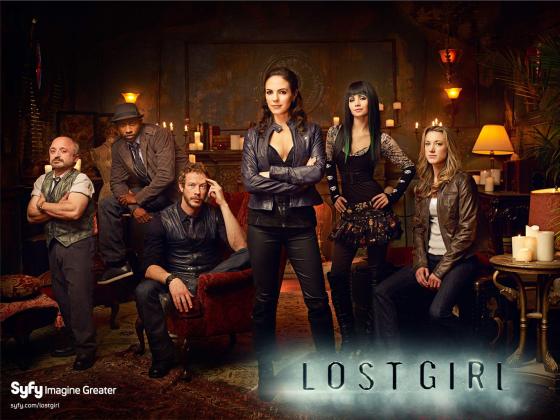 Based on the lore of the Succubus, the story revolves around the realm of faerie clans: the dark fae (the creeps) in conflict with light fae (the good guys) in a Machiavellian plot of control of human co-existence.  Lost Girl delivers plenty of interesting adventure and sexy hijinks as befits its theme.  A fairy tale with more scary and sexy for grown-up viewers looking for their fix of urban fantasy adventure, As well as those (don't call them delinquent) kids coming-of-age, who want to know what scary and sexy is all about.

The School of Good and Evil YA Novel

Soon to be a major motion picture, this bestselling Harry Potter-like school drama, is a switcheroo fairy tale, where the bad character is assigned to the school for heroes, and the good character is assigned to the school for villains.  Both characters attempt to redeem themselves from their circumstances by being part of...you guess it right...a fairy tale.  This is 2015's bestseller YA novel hit and may spawn as many sequels as Harry Potter too.  The creator is Soman Chainani. 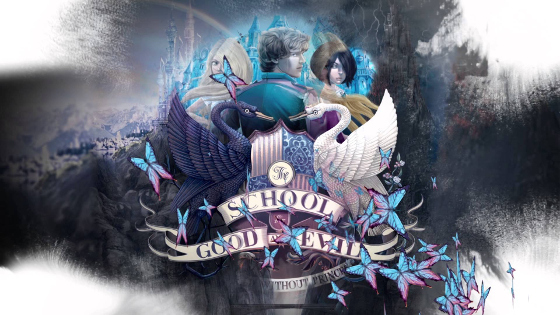 Neil Gaiman: The Sleeper and the Spindle

Rock star writer for comics and novels for all ages, Neil Gaiman is someone you either love or hate. Because he is one of the best prose stylist authors who has made fairy tale parsing a very popular way to write again.  Kids love him for that.  His own Vertigo comic book masterpiece from the 80s, Sandman, a dark fairy tale of the King of Dreams, has catapulted his work as one of the best of this generation's pop culture revival of fairy tales.  Young female readers are his biggest fans.  Neil came out with a series of novels that were unabashed fairy tales in themselves: Stardust and Neverwhere.  One of his short stories, Snow, Glass, Apples, is already a modern classic: a retelling of Snow White as a vampire and her mother as the good white witch (waaay before Maleficent was a movie). 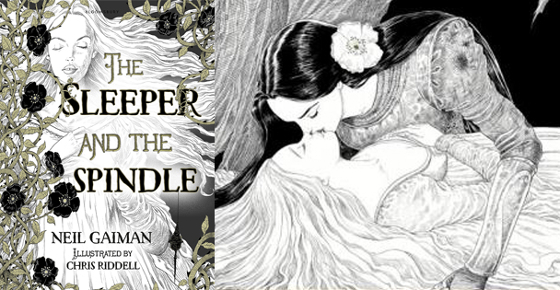 Neil's latest modern classic is a fairy tale retelling: The Sleeper and the Spindle.  An ageless favorite among girls, Sleeping Beauty works its own amazing as a female-heart-female, happily-ever-lesbian story of true love.  Cool?  Among the few blessed scribes who know how to work around the norms of spinning yarns, Neil turns a fairy tale favorite into something more endearing, knowing that stories sometimes work even better when you break the norms.

The Fairy Tale is not an exclusive trope to western entertainment culture.   Chinese Wuxia (swordplay hero epics) movies these days are now offered as dedicated, epic fairy tale romances with fantastic vistas and costumes, heartbreaking romantic moments (a staple of Chinese epic fairy tale romances is that either the prince or the princess dies in the end in the arms of their beloved, or both of them die) and the trademark swordplay action and martial arts magic.  WuXia films are extra-ordinary Asian fairy tales that attract a loyal cult of fantasy romance film fans, the way kids of all ages love Japanese anime and giant robot sentai TV series.  Here are a few fan favorites:

A romantic epic fairy tale, a warrior loses his memory of his betrothed fox demon wife, but he protects her and her fox demon sisters from darker supernatural forces out to usurp their realm.  In Chinese lore, fox demons are sly female spirits who can assume human form and beguile travellers into their lair for playtime and for marriage.  In darker stories the fox demon devours the waylaid traveller.  In this WuXia film, there is plenty of romantic fairy tale moments, and supernatural swordplay fighting sequences. 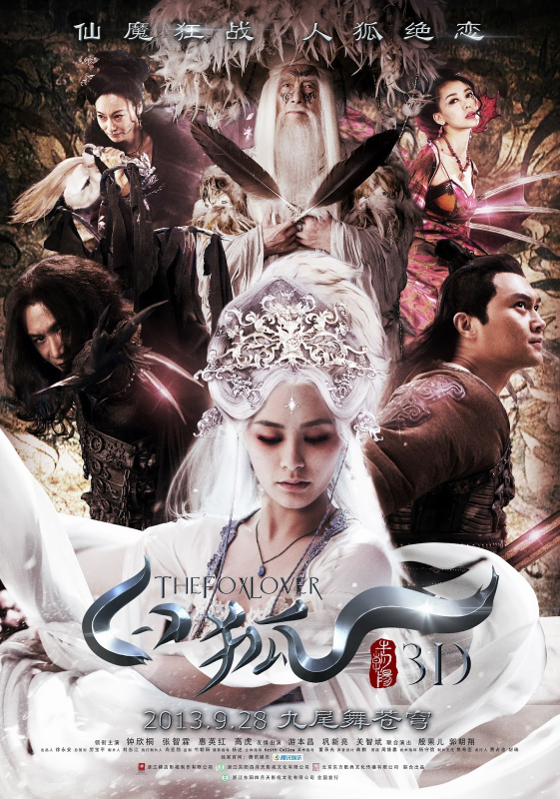 The Fox Lover, a scary fairy tale using Chinese folklore about
manipulative fox demons falling in love with a human, demon
hunter.  This is a WuXia film or Swordplay romance too.
Journey to the West

A prequel to the fable of the Monkey King, starring fan-favorite Chinese idol, Shu Qi, this film presents a coming of age, romance epic where a young monk finds his place in the world, discovers love and defeats the evil boss character.  Plenty of Chinese fantasy tropes, from changeling monsters, to the Monkey King as the supreme martial arts fighter, and plenty of supernatural swordplay action and fight scenes one expects from the best WuXia films. 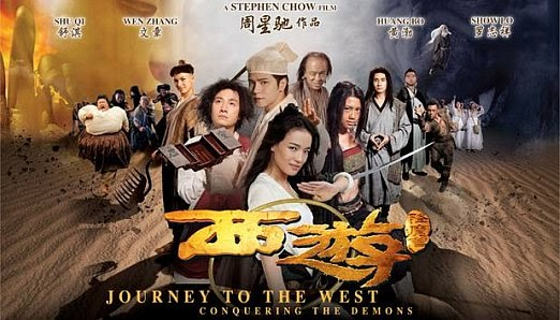 A prequel to the legend of the Monkey King, one of the staples
of Chinese mythology, Journey to the West tells of Demon hunters
who fall in love and a demon lord (the Monkey King)
who redeems its soul.
Snow Girl and the Dark Crystal

Starring the Chinese superstar idol Bing Bing Fan (Blink from X-Men Days of Future Past movie), this is a romantic tragedy fairy tale, where a man is turned into a demon by subterfuge to allow an older evil god to gain power over heaven and hell.  It is a story of seduction, betrayal and love's redemption overcoming the forces in play.  The digital imagery might not be up to snuff as western or even video game standards, but all that still works for this Wuxia fairy tale film you will want to watch over and over again. 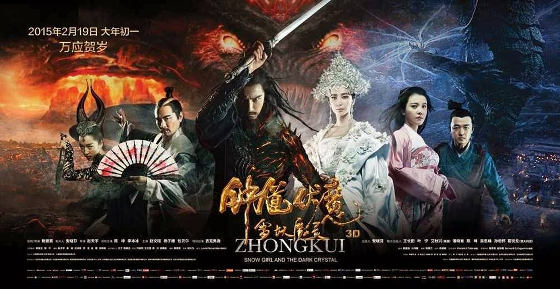