October 17, 2017       Arts and Culture
Movie Review: Kingsman,
The Golden Circle
Save the world, brave little tailor. Again.
With the whiskeybro Statesmen helping out.
Kingsman 2 The Golden Circle is the comic book movie of the year where gonzo spy-hero adventure hijinks go bouncing off the wall from everywhere. By no means does Kingsman 2 be anything less than splash-page pin-ups strung together on a movie reel, with souped-up Tokyo-Drift mini cars, and spy weapons for this generation of spy-hero fans to enjoy.  So if you watch the film, don't expect anything to really make sense in a real world context, because it is a comic book adventure movie.  Expect frommage and tutti-fruity in grand, action hero fashion. 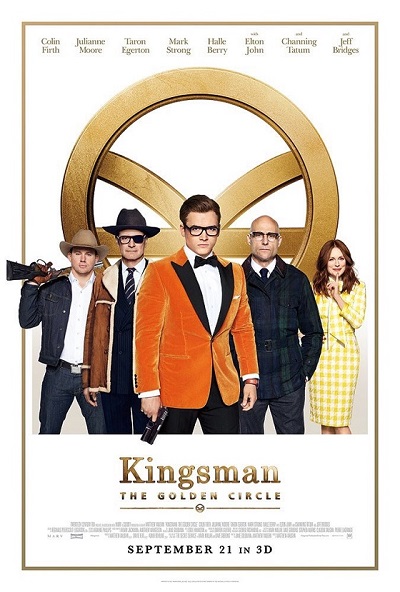 In the first movie, Eggsy saved the world by stopping a corporate mafia madman computer chipmaker who had created a device that can drive everyone madly violent and murderous via a brainbusting sound frequency.  Meanwhile, the political powers-that-be that sold their souls to the madman's cause would be saved by brain cortex implants that would keep them safe by blocking out the lethal microwaves. At the end of the day, Eggsy also wins the love of a Swedish Princess and his best friend, Lancelot is the cute girl, secret agent of their troupe.  As secret guardians of the British Empire, protecting the Brits from threats that could not be contained by police or armed forces, the Kingsmen are haute-couture men's tailors along Savile Row by day, with their entire arsenal hidden in their bespoke shop behind secret doors and underground hangars.  We get heaping comic book goodness in the second movie, and it kinda gets cloying, but still a guilty pleasure for unapologetic fans of gonzo action hero movies.

If you can sit through a Kung Fu, Wuxia or Bollywood movie marathon, you can sit through an American comic book movie with everything of the same-old, same-old: From British mini-car drift-chase scenes and missile explosions, some including the destruction of almost every Kingsmen safehouse and agent except for Galahad (Eggsy) and Merlin and your requisite juvenile black humor.  There is a madwoman, drug cartel-crime syndicate queen, hiding in old world Cambodia's golden triangle poppy mountains and secretly seeding the world's drug supply with a viral poison that can be lethal unless her own personal antidote is administered to all victims.  At this point, Eggsy is the official boyfriend of the crown princess of Sweden, plus the only surviving Kingsman aside from operations and weps master Merlin. The two remaining Kingsmen have to find their American counterparts, the Statesmen, Kentucky based Whiskey distillers who are the U.S. own secret service, under the radar , also fighting all sorts of (comic book) villainous threats facing their country.

Apparently, the Statesmen had saved the original Galahad, the youngest Kingsmen at the time from the hip-hop gangster freak's assassination attempt on him, but his gunshot trauma wound caused temporary amnesia and cost him hisleft eye.  In their efforts to find out the plots of the villains who attacked the Kingsmen, both Statesmen operatives, Tequila and Whiskey, American cowboy, action heroes whose fighting skills include hip shooting (and lasso weps as crazy as Wonder Woman's wonder whiplash), help Eggsy and old Galahad, plus Merlin into a retrieval operation for getting the antidote for the viral poison.  All of this while the U.S. President, depicted as a nasty Nazi-type genocidal madman who would rather have the country rid of all misfits than be beholden to a blackmail threat by the drug cartel queen. Americans who are currently in power are depicted in the movie as the typical profit-mad selfish egocentric bastards, except for the few who actually work to save the world.

The Statesmen whiskeybros put their massive war chest at the disposal of their cousin-secret agents, the Kingsmen, and both have operatives seek out the drug cartel's queen and her secret base to find and reconstruct the antidote to prevent genocide the world over.

One sad moment was when Merlin had to save the two Galahads by trading places with one who stepped on a land mine, singing his favorite John Denver song to attract the gatekeepers to his location then activating the mine with flourish.  The British secret agents are depicted in the movie as classy gentlemen with the swagger of punks, but whose honor no one can sell short, laying their lives on the line for friends, and saving the world rather than just watch it go to seed.

In the course of the Kingsman 2 story, there are grotesque scenes, even for a comic book gonzo movie, like two hoodlums applying for a job at the drug cartel's head office then having one of them off the other by stuffing him in a meat grinder (the movie is rated by the local MTCRB as R13).  And two robot dogs tearing that same henchman into shreds after he gets caught sampling the company's merchandise.

Although the action scenes start to look slapstick after the first car chase scene just because you've already seen them before in the first movie, and they are regurgitated in the same settings--bar fight with a Statesman fighting rednecks toe-to-toe with a lasso, an assault on a fortified terrorist fortress by British secret agents with spy-tech modern weps, you don't get anything that is seat-of-your-pants out of the ordinary like the first movie hit you with its setting and payoff.  It could have been something still fresh and surprising and still cheesy, but Mark Millar is known for offering more of the same shenanigans for his comic fans to enjoy, and that is never a bad thing.

Kingsman: The Golden Circle has its own grim moral lesson, mirroring certain events in the U.S.'s own violent law enforcement policy and its current leaders, and the seeming acceptance of a drug culture as part of every kid's coming of age.  This disturbing attitude of the movie may be part of its gonzo-ness but nevertheless, it is not hip to espouse falling through the cracks as part of any rite of passage.