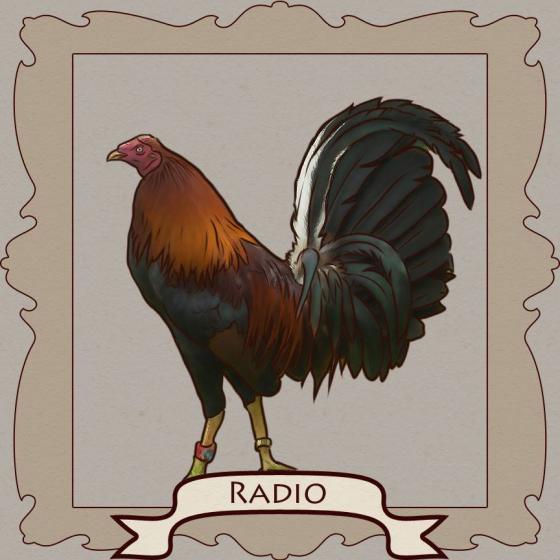 The Noisy Rooster that Could


"Cecil brought me a rooster to train one time...and this rooster was very noisy. He was happy, happy all the time. So, I trained him and uh I'd exercise him and he was just so noisy. He had a great mental attitude. So, I named him Radio. I gave him the name Radio cause he talked all the time. And that...that name has stuck with those chickens since 1962.”  by Johnny Jumper

The Radio basic bloodline was 1/2 whitehackle (the noisy rooster) and 1/2 murphy crossed to 1 Kelso hen, then the offspring were bred back to 7/8 of the cock.

And course people call "you the man that invented uh come up with the radios?" and I say well I come up with this one rooster you know and so I bred him to 1 Kelso hen then I and that's how the...and I still have that family to this day. We call them Radios but they are red chickens with yellow legs.

Radios are very aggressive fighters, and this is often both their advantage and their death knell.  As Johnny Jumper says, they aren't very smart fighters because they have only one direction--forward for the kill, win or lose.  If the opponent is a superior fighter they lunge into the knife and die instantly.  But more often than not, Radios get the first hit because of their sheer aggressiveness.

Nowadays, compared with modern gamefowl, the Radio is a tad slower so breeding with a smart and speedy bloodline might help improve its fighting chances in the pit.

As Whitehackle and Kelso hybrid, the Radio has a tendency to cut too much.  After fighting in the pit they either leave very injured from too much shuffling or clean and alive because Radios can win super fast against unwary offbeat gamefowl.  Radios can break high with the mortal slash, when their opponent is down the Radio is too fast with multi-shuffling hits on top of its enemy.  The Radio has a medium-high station.

An ideal cross with either the Kelso or the Sweater is recommended, the first for its sidestepping fighting smarts and the latter for better power and gameness in the swarming style Sweaters are known for.  Radios tend to peck on your hand if they are nervous or suspicious of the handler carrying them.