The Mystery of the Shemitah: God's Seven Year Cycles

August 1, 2015       Unravelling Mysteries
The Mystery of the Shemitah
God’s Seven Year Cycles May Be More
Than Just the Hebrew Harvest Calendar
Remember the Biblical tale of Joseph in the Old Testament where the Lord admonishes him to save and store grain for 7 years of bountiful harvests to be prepared for 7 years of drought?

Aside from the weekly Sabbath that was derived from the creation cycle of 7 days.  The Jewish nation also followed the 7 year feast and harvest cycle as prescribed by the Lord in Leviticus 25: 1-4.. 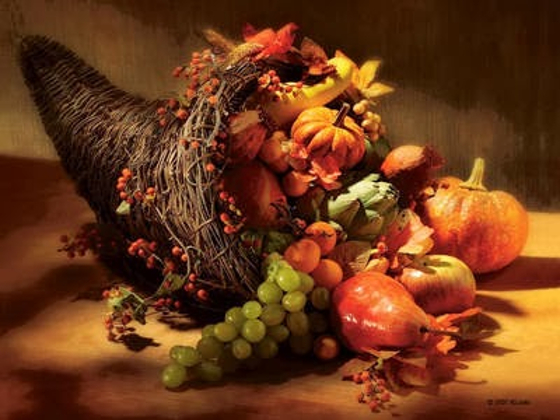 The Sabbath Year was when Hebrew farmers would stop sowing
and allow the fields  to rest after the Lord's promise that the 6th year
would yield 3 years worth of harvests.  Hebrews called it the
'Shemitah Year.

The Shemitah year, or the Jewish Sabbatical year began officially last year, on September 24, 2014. The Shemitah is the seventh year in the seven-year harvest calendar of Israel. According to the Torah, personal debts were to be waived and a sort of financial reset occurred in ancient Israel during the Shemitah. Time was set aside for Hebrews to stop sowing and harvesting and allow the fields to rest while  devoting themselves to worship the Lord. 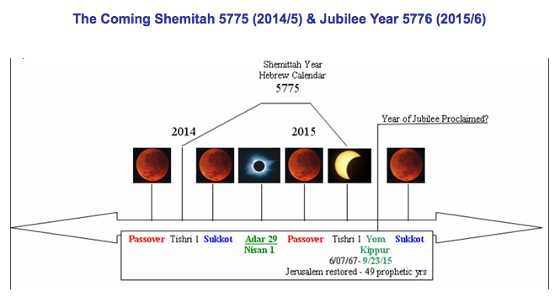 The Harbinger: Bestseller Sham or The Real Thing?
A sensational book about the Shemitah has hit the best seller lists offering a supposed supernatural connection between the rise and fall of the U.S. financial markets resulting in recessions, and the Jewish Shemitah calendar.  Many have criticized the author, Rabbi Jonathan Cahn, as another doomsday prophet cashing in on Christian apocalypse theories, but his controversial book, The Harbinger, became THE  bestselling Christian book of 2012, and it presented plenty of evidence from the author's research of the U.S. market corrections covering 1973 up to now plus some coinciding world events.  Rabbi Cahn audaciously proposes that the coincidence is 100 per cent accurate.  He has a new book out called the Mystery of the Shemitah.

Rabbi Cahn claims that the evidence shows the pattern of seven-year cycles going back to the financial collapse that led to the Great Depression of the 1930’s. All of the market corrections coinciding with the Jewish harvest calendar cycle known as the 'Shemitah.'

All of the attention on this year's Shemitah cycle is creating plenty of tension.  Market observers and doomsday hobbyists are already pointing out that the current market is a bubble about to burst, and notable finance and investment moguls are already hedging their bets by pulling out investments: billionaire investors like; Warren Buffet, John Paulson, George Soros, and Carl Icahn are unloading large shares of stocks in certain parts of their portfolios—as disclosed by ZeroHedge.com, a popular financial blog.  Often, when these institutional investors make a move, an impending market correction is about to happen.

Another doomsday sign that pessimists are gleefully pointing at is the final Blood Moon, on the Feast of Tabernacles, September 28, 2015. This also coincides with the wrap-up of the U.S. homeland military exercise around the U.S. Midwest code-named Operation JadeHelm15, which includes the mobilization of plenty of apocalypse era indicators like mobile clinics, FEMA shelters and survival equipment.

The Shemitah As Hebrew Harvest Cycle

Here is the actual Biblical quote for the Shemitah law:

The Lord said to Moses at Mount Sinai, 2 “Speak to the Israelites and say to them: 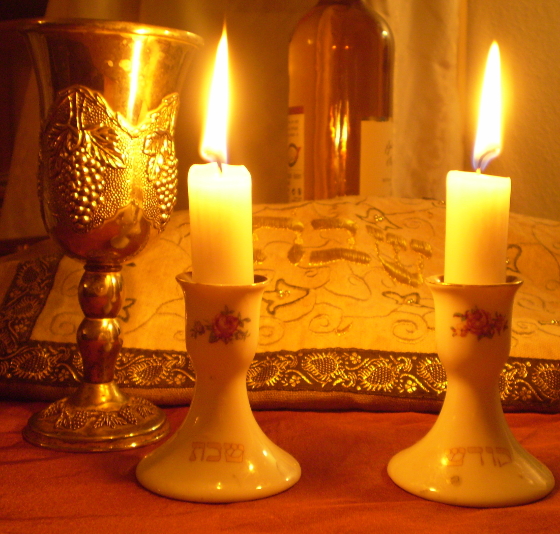 Aside from rest on the 7th day of every week as the Sabbath,
ancient Hebrews also celebrated the 7th year of each 7 year cycle
as a 'rest year' from farming and working their fields.
Candles for Shabbat  Image by Olaf.herfurth
for Wiki Commons CC BY-SA 3.0

“Then the land will yield its fruit, and you will eat your fill, and dwell there in safety.‘And if you say, “What shall we eat in the seventh year, since we shall not sow nor gather in our produce?” 21 Then I will command My blessing on you in the sixth year, and it will bring forth produce enough for three years.”

Over time, the last day of the Sabbath year and the year itself came to be known as the “Shemitah” (pronounced sh’mi’-tah) among the Jewish nation, the desecendants of the Israeli Hebrews.

MORE evidence in scripture show that God ALWAYS performed His works and actions according to the Jewish moon calendar and still does. From resting on the seventh day after creating the world in the first six days: Before a law was made that the Sabbath be kept holy. (Note that it is mentioned in the Bible that a day in the Lord's time is one thousand years on earth and many seem to overlook or misunderstand this, especially fundamentalist creationists)

Consider that the Lord also established the church age on a feast day, namely Pentecost: the church age is the period where the whole world or the Gentiles got a shot at salvation through Jesus, while the Jewish people were set back by their own blindness to the Lord.  The Lord also mentions the END of the church age—speculated by observers of the current blood moon tetrad cycle to occur also on a feast day, namely: Trumpets, or the last day of the perfect tetrad lunar eclipse phenomenon of 2014-2015.  This will be a turn where the Lord calls back his nation, Israel, to his fold.

Nothing in scripture indicates that the LORD ever stopped His manner of working or acting His will based on the Jewish moon calendar.  Neither were the laws of Moses ever discarded after the Lord's teachings were and still are fulfilled in Christ's coming and resurrection.   Even Christ teaches us to follow the laws of the Lord and provided insights on how they actually work and not how Pharisees interpret them.

The reason the Shemitah is now being understood as a prophetic sign, that MAY apply to any nation (note that Rabbi Cahn uses the word “may” here) is because we can see and study the WORKS of God in the Bible. God used the Hebrew moon calendar to bring salvation to ALL people groups when Christ died on a Passover, was raised on First Fruits, and when the Holy Spirit came at Pentecost to anoint the Disciples.

While most will dismiss the current interest in the workings of the Shemitah, we should always be careful when others are quick to dismiss and waylay, especially those who choose to overlook the signs of the times.

All of the Lord's teachings about the end of days include signs.

Rabbi Cahn may be sharing something significant and reminding us about the Lord's ways.  If disasters strike during this Shemitah cycle, those events might be symbolic that we must remain vigilant more than ever.  World powers rose or fell according to seven year cycles which coincided with the Shemitah calendar. Same as the ancient nations of Babylon and Egypt in the Bible.  Cycles of lunar and solar eclipses as Signs of the Heavens may just be God's reminder that He IS around and watching over us, more than we even know.

The Bible is not a closed book historical oddity, but is largely opened to us through the work of the Holy Spirit. The Living Word of the Lord reveals  His nature, His character, and His plan throughout all eternity.  Including in the present time and space in history.

Remember that the original Greek translation of the Word of God uses a pervading present tense for ALL of the Bible—indicating that  Scripture is not something that happened long ago, but is an ever present and constant being of the Lord's glory.

Some Bible code aficionados have even marked passages in the Bible that actually mark time in a very precise manner such that most of the future events may be plotted in a schedule coinciding with the Hebrew lunar and harvest cycle.

Any new truth coming out in these turbulent times to the world is an old truth rediscovered. By the end of this Shemitah and Blood Moon cycle, the last week of September 2014, we will see how the world changes for the future.  It will be 600 years again before another Blood Moon cycle will be seen in the heavens.  2012 was the Mayan calendar cycle for the 3rd age of Man.  Are we going into the fourth?
unravelling mysteries, the mystery of the shemitah, god and 7 year cycles, shemitah, joseph and 7 years of good luck, 7 year jubilee, harvest year calendar, the harbinger, rabbi jonathan cahn, financial market corrections, historical coincidences, signs of the future