Home  »  Unravelling Mysteries  »  The Music of the Spheres: Your Soul has a Song from the Heavens

The Music of the Spheres: Your Soul has a Song from the Heavens

January 21, 2015       Unravelling Mysteries
The Music of the Spheres
The Heavens Move According to
the Song of the Angels 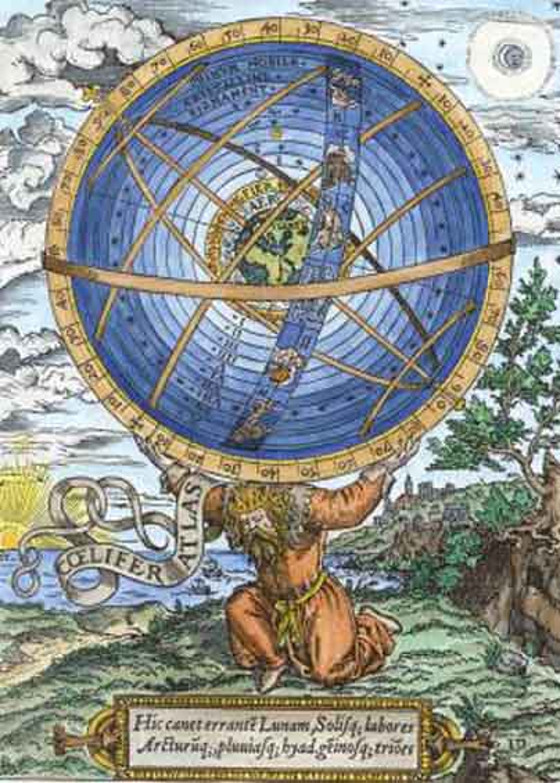 The Lunar calendar is coming up and many people are going to have their fortunes told according to the traditional Chinese Feng Shui mystical readings.  This eastern astrological mysticism has an exact science of its own, refined over generations and proven from observation of phenomenon over the years.

But there may be a MORE interesting way of telling your astrological fortune as established by western mystic-mathematicians led by the Greek mathematician, Pythagoras and continued by other notable scientists like astrologer, Johannes Kepler.

Each of the heavenly bodies, from sun to moon, to planets and stars have a musical note assigned to them and they play out a harmony as they move in the heavens.  The alignment of the planets at the time of one's birth are said to create a song that is the same as your earth soul's song when you are born.  Interesting?  Find a geomancer who knows about the Musica Universalis or the Harmonices Mundi to plot your astrological song.

Pythagoras' Musica Universalis
A Divine Geometry of the Heavens
Music and astrology began their relationship when Greek philosopher Pythagoras figured out an elegant way for measuring and explaining the nature of heavenly bodies using tones: a mathematical philosophy named Musica Universalis.  A divinely inspired numerology also defined by many mathematicians as Pythagoreanism.  People believed in the Copernicus model of the solar system at the time with the Earth at the center, and the other planets revolving in perfect circles or spheres--defined by whole-number ratios of pure musical intervals thus creating a divine harmony of scale. 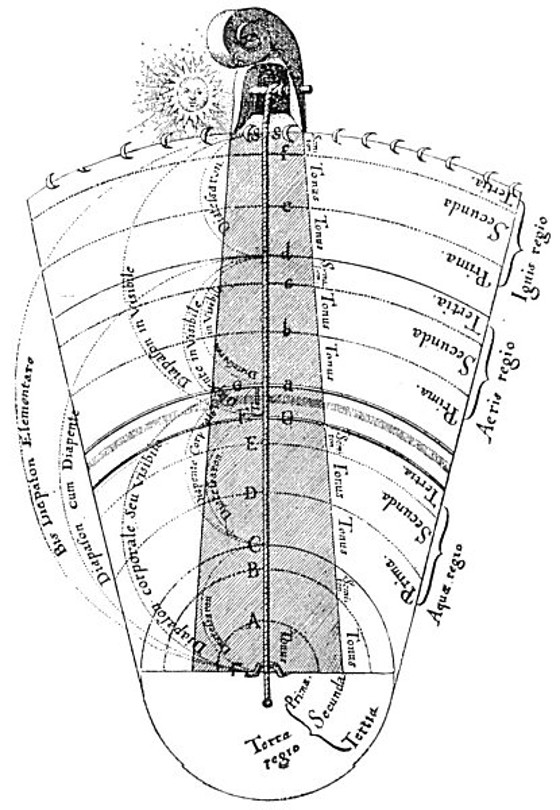 According to legend, Pythagoras claimed he could actually hear the 'music of the spheres' and was able to plot out the harmonic scale of notes as simple ratios of small integers.  Thus the harmony or song of the cosmos can be played out as single notes on any musical instrument.  Musical notes as a translation of the great celestial movements of the day.  Pythagoras' concepts were transferred by Plato and others into mystical-mathematical clockwork representations of the structure of the universe.

The Music of the Spheres as the Spark for Science

By associating music with astrological movements, Pythagoras evidently invented western science. By accurately finding a harmonic relationship between the measurements of length of the heavenly bodies with musical tones he made the first known reduction of a quality (sound) into a quantity (length and ratio).  Quantifying observable natural processes into mathematical relationships and formulae is one of the functions of science in our age.

Pythagoras also proposed that the musical octave is the simplest and most profound expression of the relationship between spirit and matter.  A harmonic scale that is a miracle because it is a whole of two
audibly distinguishable parts, that are still one and the same.  A perfect example of the hermetic maxim "on earth, as in heaven." 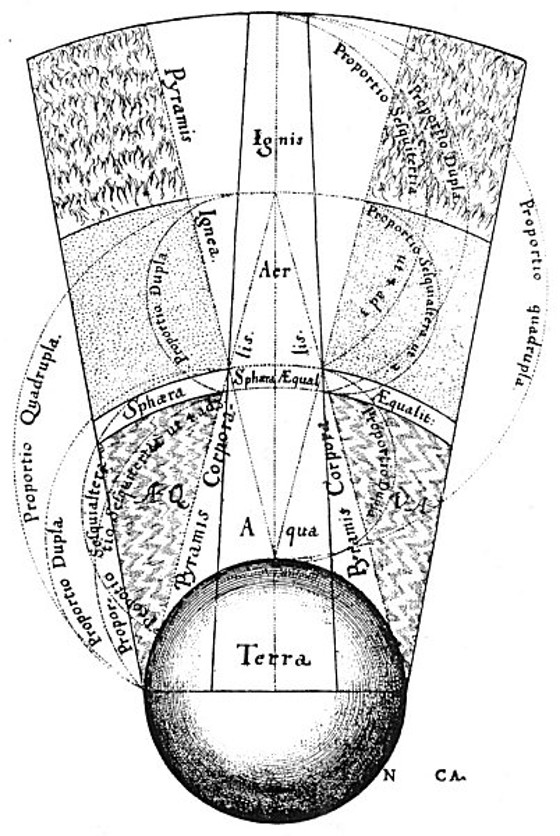 The harmonic scale by which the planets and the stars can be measured is marked as follows:

The sum of these intervals equals the six whole tones of the octave.

Establishing music as an exact science, Pythagoras used his theretical law of harmonic intervals to quantify everything he could see in Nature.  Even the progression of the elements was measured according to harmonic ratios. While making a list of the elements in the ascending order of their atomic weights, John A. Newlands discovered at every eighth element there was a distinct repetition of properties. This discovery is known as the law of octaves in modern chemistry.

Every element in Nature has its individual keynote according to Pythagoreanism.  If these elements are combined in a composed structure the result is a chord that, if sounded, will disintegrate the compound into its basic parts. In the same manner, each individual has a keynote that, if sounded, will supposedly destroy him. The story of the walls of Jericho collapsing when the trumpets of Israel were sounded isn't just a fable but reveals the arcane significance of individual keynotes or vibrations as powerful instruments that both harmonize and destroy.

In his relentless poring over the clockwork unknowns of our solar system using the ancient beliefs that the heavens were perfect in their circular orbits, Kepler became one of the immortal names after pinpointing the fact that planets did NOT move in a perfect circle, but in an Elliptical orbit.

Johannes Kepler published his own Harmonices Mundi, in 1619.  Explaining the harmony of the world, in a series of five books and contained what is known today as his third law.

Based on geometry, from which Kepler derived first a theory of musical harmony and then a cosmology of the heavens and the earth.  Kepler intentionally sought to find common ground between music and movement in the solar system. His music of the spheres is based on the relative maximum and minimum angular velocities of the planet measured from the sun. Using his theories, Kepler allotted to the planets musical intervals and musical motion.

He figured out through painstaking measurements and musical notations that a Sun-centred planetary system not only gave more precise measurements of celestial motion which could be plotted, but the Harmonices Mundi showed a more divinely inspired geometry than the perfect circle template used by older generations of astrologers.

Elated by his discovery, Kepler himself stated that, "...the movements of the planets are modulated according to harmonic proportions."  He correlated the planets placement in the heavens and the speed by which the planets made their orbits with an accurate and measured complete musical scale.  The clockwork distances and astronomical motion of the heavenly bodies can be precisely calculated and described as musical harmonics or note sequences. 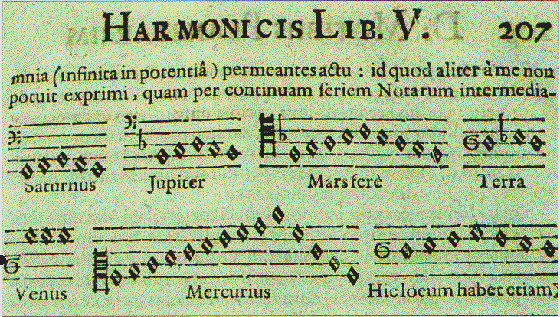 Kepler's, First Law states that the planets move in ellipses and that the Sun is not at the exact centre of their orbits. Each planet moves between a 'perihelion' point closer to the Sun and an 'aphelion' point, the farthest away.

His Second Law states that the planets move faster as they moved towards the sun than when they are farthest from the sun. Kepler measured their angular velocities at these extremes (i.e. how far they travel in 24 hours in minutes and seconds of arc as viewed from the Sun) and recorded this ratio as a musical interval. 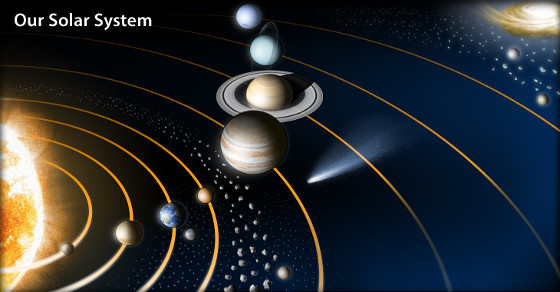 Saturn, for instance, moves at a rate of 106" per day at aphelion and l35' at perihelion. Kepler found that the angular velocities of all the planets closely correspond to musical intervals.  Comparing the extremes for combined pairs of planets, Kepler derived a complete scale off the intervals he measured:

Jupiter's maximum and Mars' minimum speed corresponds, to a minor third.  Earth and Venus, a minor sixth. Rather than just the monotone planetary scales of earlier schemes, Kepler's measurements revealed ever-changing polyphonic chords and harmonies as the planets move between perihelion and aphelion.  Like a rock song's guitar solo instead of just chopsticks. 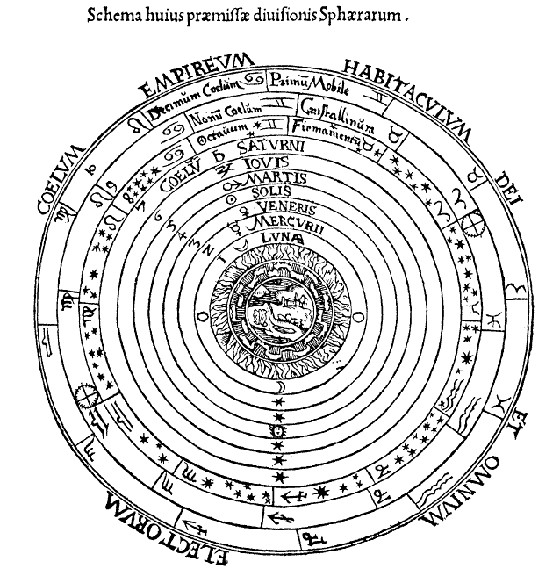 Discerning from countless transcriptions of astrological data, Kepler discovered that when planets formed angles at any moment: the bodies created a 'song' or a harmonic sequence of notes.  Also called a 'resonance' which could be measured.  This song is supposed to match the archetypal 'Earth-soul' and can be measured in the souls of individuals born and matched with the configurations of the heavenly bodies.

Johannes advocated that this 'celestial imprint' was more important in divining a person's astrological fortunes and future than the traditional readings on zodiac signs and planetary houses.  Claiming that the 'resonance' was "the vital power of the human being that is ignited at birth, there glows that remembered image..." 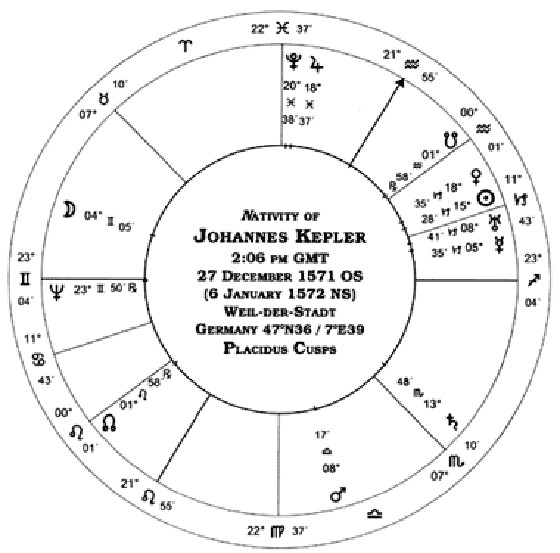 One chart used for divining the celestial imprint for
Johannes Kepler using his birthdate to derive his soulsong.
The music of the spheres is more than just some vain allegory that lucked out on its astrological plotting matching a harmonic scale.  Rarely emphasized, even in modern science education, because this theory is more supernaturally inclined than just precise astronomical distance measurements and motions, the concept of universal harmony of the cosmos breaks through all the bullshit of organized chaos coming together, as explained by evolutionist science theory.  The Music of the Spheres is something that is divinely inspired and exalts the design of Creator over an oblivion-zen, jigsaw puzzle assembling itself.

But modern science might be actively using the 'music of the spheres' as methodology for detecting and charting planets, even if it may not be acknowledging the divine part of it...the Kepler space telescope can accurately measure the sizes and ages of stars five times better than any other method just by "listening" to the sounds they make."

Instead of music of the spheres, modern astrophysicists call it "astroseismology."  The technology measures micro-changes in the intensity of a star's brightness which happens when soundwaves reverberate inside the heavenly body.  Using these 'resonances,'  NASA can put together a highly accurate physical picture of what the inside of a star looks like based on previous studies of stars using the same measuring techniques.

Kepler's Music of the Spheres can actually be performed in real time: using Kepler's formulas, but the entire composition would take 30 years to perform.  We wonder if anyone has attempted to run the composition on any digital recorder and put it on compressed time so that people can get samples off the most unusually inspired, yet one of the most precise method of astrology and astrophysics ever put together.