The Sun Is All The Power You Need

Solar cells are properly known as photovoltaic cells.  Current photovoltaic technology has reached 15 to 20 per cent efficiency in converting the sun’s rays into electricity; further R&D promise higher than 20 per cent energy return can be achieved in the near future.

When sunlight hits the cell, which is usually made out of silicon, it makes electrons change shells within the atoms that they are attached to. This action produces electricity. Thanks to increased Chinese production of photovoltaic panels, residential solar power has become more affordable even in third world nations.  You can now buy your own DIY rig or lease electricity from a solar utility provider.  Think about it like having all the energy you need by soaking what’s falling free from the sky. 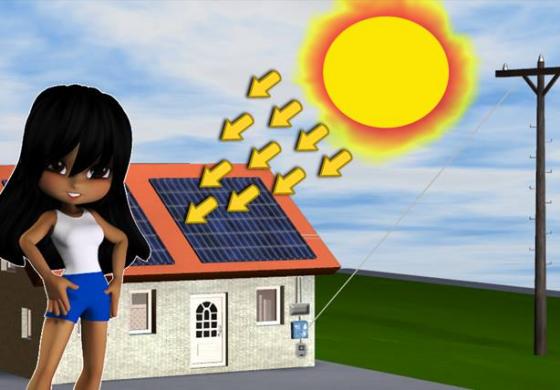 How Much Energy Is Floating Down on our Planet as Sunshine?

The Sun provides free energy via solar radiation with the equivalent of 1,367 watts of power per square meter. This is known as the ‘solar constant’.  On Earth we only feel a fraction of this energy. The Sun actually delivers about 7,000 times more energy to the Earth’s surface than we globally generate and use at the moment.

Enough sunlight falls on the earth’s surface every hour to meet the entire world’s energy needs for one year.  The potential of the sun as a power source is nearly unlimited.  The sun puts out four hundred trillion trillion watts every second of every day.

PhotoVoltaic systems use semiconductor cells, or modules, that convert sunlight directly into electricity. PV flat panels can be mounted on rooftops or canopies, or built into roofing shingles and other building materials.

Electricity production can vary from four to 50 kilowatts. A PV system during daytime reaches its maximum output between noon and 1 p.m.  PV modules are very hardy, designed to withstand a harsh environment, including arctic cold, desert heat, tropical humidity, winds of more than 125 miles per hour, and one-inch hail at terminal velocity.

LIVING ‘OFF THE GRID’

An increasing number of people, are choosing to live ‘off the grid’ as a lifestyle choice. These people are enjoying installed solar panel energy, but serious compromises are made.  The amount of electricity generated is dependent on the sunshine you receive.  Keeping a well stocked fridge might be rather difficult  living off the grid.  Power from solar is usually stored in arrays of batteries for later use, when the Sun is not shining.  Because photovoltaic cells may be attached to just about any structure or used free standing, freedom from bills and self-sufficiency is a choice even if power may not be available 24-7, 365 days a year.

Working with a team from Purdue University, researchers from Georgia Institute of Technology‘s Center for Organic Photonics and Electronics (COPE), have developed material that functions as more efficient, and even recyclable organic solar cells made from trees.  A material sourced not only from trees but from other plants as well can be implanted with polymer solar cells for a PhotoVoltaic patch that can even be easily recycled in room-temperature water.

Trasparent Solar Cells for Your Windows!

Not long from today, clear window panes will soon be powering homes, workplaces and even vehicles.  An exciting new organic solar cell with levels of transparency higher than current tech, as well as better energy conversion efficiency was developed by Researchers from the Institute of Photonic Sciences (ICFO).  Their breakthrough research was published in the journal Nature Photonics.

Organic Photovoltaic (OPV) cells are being seriously considered for energy applications in small electronics, appliances and devices such as displays, tablets, smart phones, and study leader Professor Jordi Martorell expects his team to reach the extremely high transparencies and efficiencies needed to make them useful.  Current silicon-based tech solar cells are limited by placement and size.  Soon researchers will develop the ability to print solar cells onto just about any surface at cost effective methods.