Home  »  Within Reach  »  Russian Watches: Time to Get Your Heirlloom Watch Now

Russian Watches: Time to Get Your Heirlloom Watch Now

October 7, 2016       Within Reach
Russian Watches
Grab a Soviet-era or Russian brand
timepiece when the Philippines
and Russia establish better trade
relations and set up shops.

James Bond doesn't really own the coolest watch in town.  On the contrary, his 70s pulp nemesis, the Soviets might have the best kept open secret--Russian watches are second only to the Swiss in quality and precision engineering, as far as luxury and workman's brands are concerned. 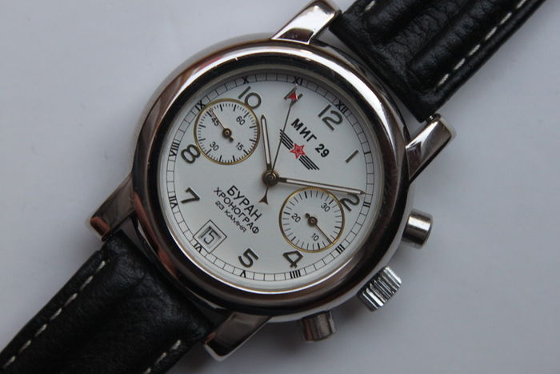 Pinoys are more familiar with the Swiss, Italian and German luxury brands like Rolex, Tag-heuer, or Patek Philippe.  But if they looked at the long-lived Russian brands like Vostok, Raketa, Sturmanskie, and Poljot, they will find  some of the best mechanical watches in the world and used in some of the most rigorous work conditions by field soldiers or airmen for the Soviet Army as well as working class Russians who love good quality.

These brands have been cult favorites among mechanical watch collectors and Russian watch fans the world over.

Unlike Japanese and U.S. brands that popularized the cheaper quartz powered watches, Soviet-era brands and current Russian brands pride themselves in manufacturing precision mechanical watches--the kind that you wind up with the watch dial to power its internal spring mechanisms to keep the watch ticking .  Although some of the Russian brands now offer automatic and quartz watches.

You can own a very collectible Russian watch for cheaper than $100, and even the luxury brands sell for just under $350.  A pre-owned Russian Kumaderskie Army watch from the Soviet-era will go for as low as $56 on eBay and still look more precious than most Japanese brand quartz movement watches.
Let's look at some of the Russian watch brands and the history behind each marquee:

Manufactured by the Petrodvoretz (Peter Palace) Watch Factory in Saint Peterburg, Raketa or Pакета in Russian Cyrillic, means "Rocket" in Russian and has been around since 1962.  The brand is best known for its 24-hour watches.  Raketa is worn by luminaries like Russian President Vladimir Putin.

The Petrodvoretz factory also supplies parts to the Swiss watch industry and produces equipment for the Russian Airforce’s Sukhoi fighter aircraft.  Raketa even has its own in-house school that trains future young, Russian watchmakers.

The brand Raketa is most  popular among collectors of military-styled 24-hour watches.  The brand is on of the few surviving watch factories from the Soviet-era that still produces its own in-house movements--(the clockwork mechanisms that keep time).  Other Russian watch brands have since adapted to Swiss patent time-movements for their mechanical watch technology, but Raketa still makes its own in-house internal parts and mechanical workings. 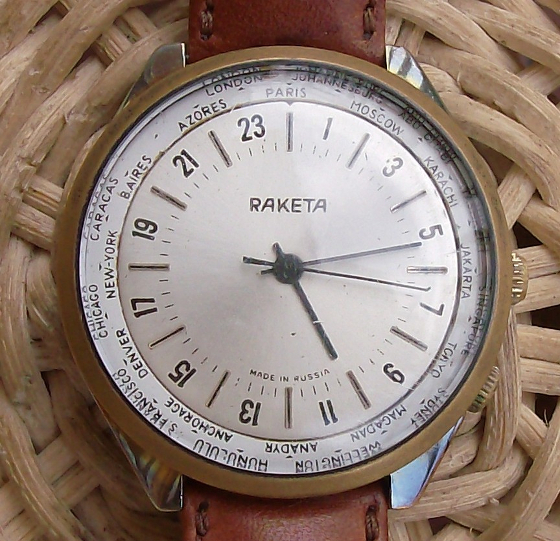 This Russian watch is also known for its trademark, paper-thin watch hands.  Some of the versions of the 24-hour watch like the black Pilot have lume but these tend to fade over time.  Reading time in 24-hour increments may take some getting used to.

Marking the day in 24-hour segments is a military way of life but most people who use the internet and who work online generally think in 24-hour time anyway, making this watch a possible trend setting must-have among Pinoys who work locally for BPOs and businesses that use a 24-hour way of scheduling their workdays/nights.

Readability is of primary concern with a 24-hour watch and Raketa timepieces are much easier to read because of their larger and clearer numbers that are spread out over a wider surface area.

The company went through a major overhaul in 2010 by acquiring new equipment, adjusting its production to modern quality standards and may redesign its entire new collection of classic timepieces soon, particularly the cult favorite 1969 Polar model.

To manufacture this Polar model back in the day, the then Soviet government requested Raketa to make a watch that could withstand the rigors of Arctic-Siberian cold.  A special team led by Kisilev and Starkov, both esteemed watch engineers, made good in 1971 and produced the first Polar timepiece.  It could survive extremely low temperatures and was commissioned for exclusive use by the Soviet air force, for cosmonauts and for submarine crews.  Until Gorbachev’s perestroika of the 1980s, the Raketa Polar watch was reserved only for its military personnel's use and could not be bought by the general public.

Urban legends about Raketa herald the watch's durability:  one story goes on about a Soviet official who misplaced his Raketa watch in his garden. He found the watch a year later after scrounging around and to his pleased amazement, the Raketa 24-hour watch survived a Russian winter and was still perfectly functional.  Raketa also features premium 24-hour watches which are available from factory-authorized sellers ranges at USD$150 to USD$650.

The Vostok brand makes Russian aviator/airman and diver mechanical watches like the ever popular Komandirskie and the more upscale Amfibia at its factory in Chistopol, Tatarstan, Russia.  During the Soviet era, military watches of Vostok were marked "ЗАКАЗ МО СССР," which translates to English as "Ordered by the Ministry of Defence of the USSR."   Watches with these marking have become the most prized collectible Russian watches among fans of classic and exclusive Vostok timepieces.

Vostok rolled out its first Komandirskie in 1965 and the brand is now approaching its 50-year anniversary.  Komandirskie is available in 70 models with either automatic or manual winding.

Its sister brand, Amphibia, is the more prestigious or luxury watch, while Komandirskie is a more rugged design that is inexpensive and has been a staple, field-issue watch of the Soviet soldier as well as Russian watch aficionados looking for a durable and accurate timekeeper. 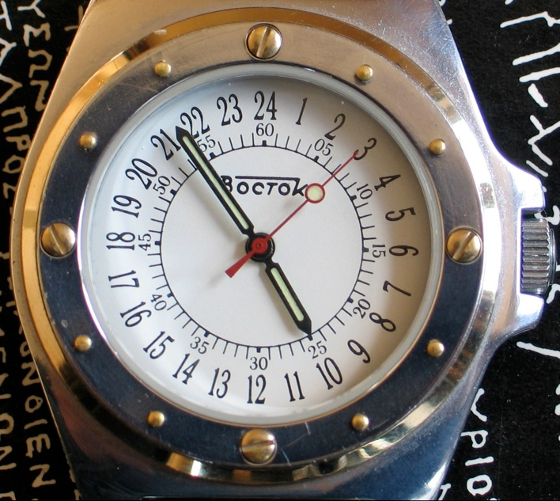 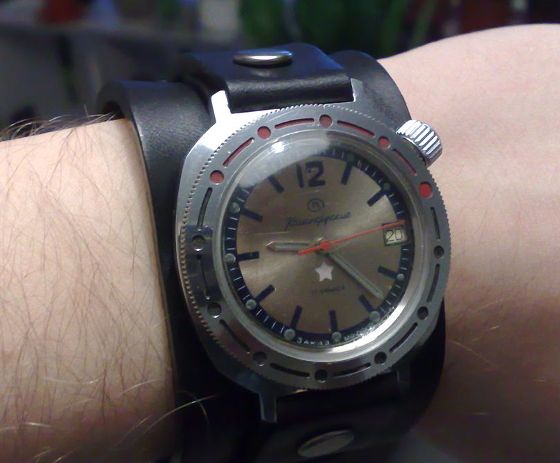 Image Credit:  Lauri Rantala for WikiCommons CC BY 2.5
A Vostok Komandirskie from the Soviet era.
A solid value and highly collectible, the older Sovier-era have heavier watch lugs.  The original 3AKA3 versions of the Komandirskie are still highly prized by collectors and the newer one with the 2 o'clock crown are still widely available

The modern Russian Vostok Komandirskies have the 2414A mechanical, manual-wind Vostok movement. Pre-owned Komandirskies cost less than $50.00. $45.00 with free shipping from Russia to anywhere in the world.  You can purchase your yo-yo (Pinoy nickname for watches) on ebay or on Smirs.com.

The Volmax Sturmanskie brand is a collector's watch that has special commemorative editions like the Juri Gagarin which has 20th, 30th, and 40th anniversary versions.  These even have the profile of the Soviet cosmonaut engraved at the back panel of the watch.  Russian watch collectors include a Gagarin as among their must-haves aside from the 24-hour watch--Raketa, and an everyday use Komanderskie.

Volmax watches are a premium "limited edition" or "collectors" timepiece brand.  Many Volmax watches sell for between $500 and $1000. Some cost much more.  Volmax is officially distributed in more than 25 countries. 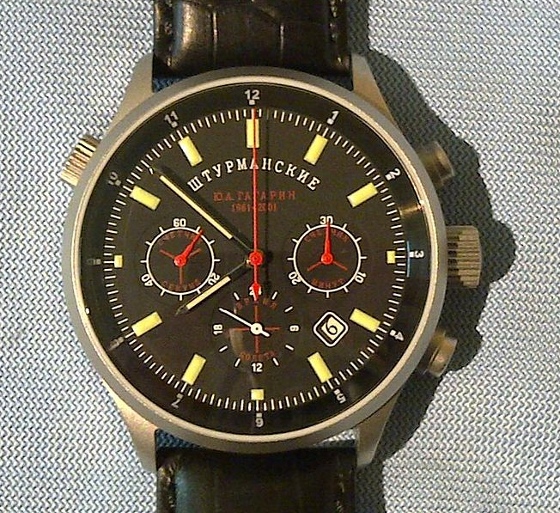 Russian cosmonaut Juri Gagarin wore a Sturmanskie when he rocketed into earth orbit on April 12, 1961.  Gagarin's Sturmanskie was a small, basic mechanical watch.  Sturmanskie watches use a variety of mechanical movements designated as the specific calibers: 2614, 2623, 26669, 3133 and 31681.

There are Chinese knock-offs of Sturmanskie that are quartz powered, but if you want an authentic Russian-made, mechanical or automatic chronograph, you may order from Volmax directly.


If you look at the lineup of watch models above, the Russian aesthetic for timepieces leans towards classic, spare face lay-outs with some embossed military imagery in the middle.  Inside these elegantly simple designs are precise mechanical parts that are easy to repair yet still last for a lifetime.  President Roddy Duterte wouldn't go wrong to have a deal where Russian brand watches can enjoy an ASEAN renaissance by establishing brand retailers in the Philippines.