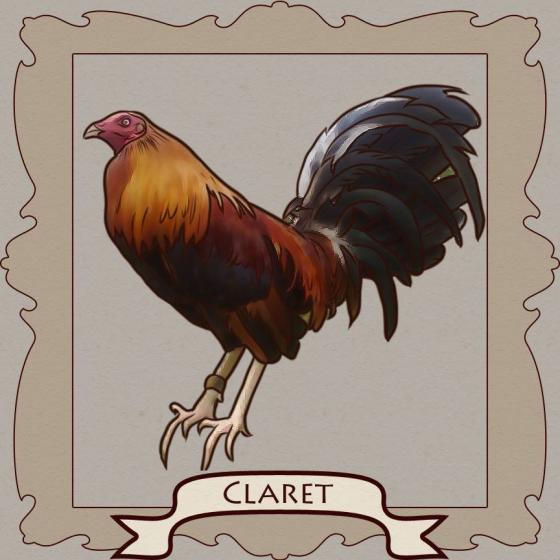 Colonel Madigan's Claret was by far the best perfected Claret fowl ever created. Two great fellow cockers have kept the bird what it should be. According to cocker lore, the original Clarets were bred by accident.  Colonel Madigan was a racehorse person and he turned some hens loose to walk with the rooster at his horse barn so the first Madigan Clarets may have been yard bred.  Some say there is Whitehackle blood in the original bloodline to give them their speed and power.

Juan Garza originated this fowl with his father from Mexico and from this cross they created a type of fowl that dominated Texas for over half a century. During this time they developed a gamecock which no other fowl could compete with in any derby which was a Roundhead, Claret, and Kelso called their 3-way.

The “old-timers” are dark red, some are spangled and come pearl legged and black spurred and they fit the profile of what Colonel Madigan established as his Claret gamefowl.  Their legs are very wide a part from one another and because of this they do very good in any competition.

Both the Madigan Claret from Wallace and Garza are a perfect match of pure stains that have been vigorously culled and improved for several generations.  The Clarets come from two breeders and have pearl legs and black spurs the two families both have won over 85% with these birds in major competition.

Clarets will improve any breeding program.

Gamefowl breeders of the Old Guard are raised on the premise that if a rooster can't fight and win as pure stock, they can't fight even if they are crossed.  Most breeder who keep the bloodline keep their clarets pure.  Because of the philosophy that keeping a strain pure will let you know if they are still any good in the pit and as base for crosses.

After 60 odd years with fighting Clarets in the pit everywhere in the world, if they weren't winning gamefowl they wouldn\'t still be around.

Clarets are mostly straight combs, black breasted and wine red in color. They also possess wings and tails that have white streaks and usually white legged. While having a broad back and compact built, their weight ranges from 1.9 to 2.3 kilos.  Clarets are high stationed roosters, have heavy feathers that are dark red wine in color, are pearl legged and black spurred. These have big heads with white streamers in the tail with no other white anywhere.

Fighting Style
The big red rooster is popular for being one of the keenest cutting machines in the air and even better on the ground.  As a single stroke attacking gamefowl they only hit once but that one kick is lethal most of the time because these roosters are fast gamefowl as well.  Smart fighters, Clarets are known to break high, can last a long fight in the pit and are aggressive hitters.  Aside from cutting skill, they have power too which makes their cutting as deadly as any single stroke gamefowl anywhere.  Known as angat sarado or high flying with aerial finishing moves, they are also offbeat fighters who can time their attacks for a sure hit.  One of their downfalls is that they bite into a fake by wily opponents who are counterkickers that cut well.  Otherwise, even the swarming Sweater is more than a fair match for one of the best of the Reds.