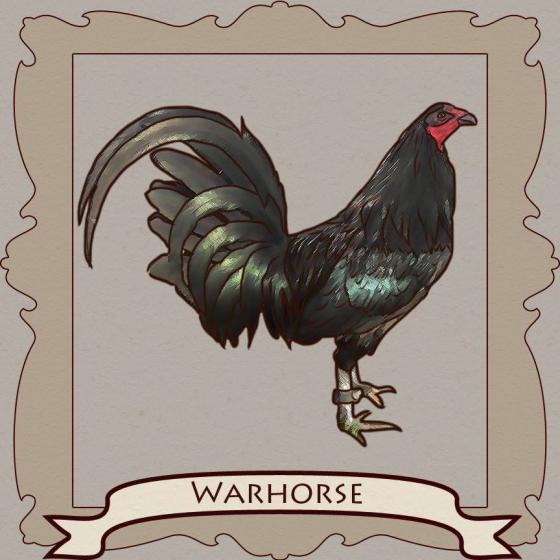 The two most popular gamefowl from Britain in the early days of cockfighting were the Whitehackles of North Briton and the Stone Irish or Warhorses of Ireland. These two bloodlines were considered as the only known true source from which the pure stock could have been obtained by American breeders.

In 1855, when John Stone of Marblehead, Mass., visited his southern pal, Colonel Tom Bacon, and beat him at a derby at Columbia, S.C. He used two styles of cocks against Bacon, one of them, he called his "Irish Brown Reds." Along the way, Stone got into a misunderstanding with one of his handlers so he quit the sport and a trio of "Stone Irish" were given away the to Peter Sherron.  Sherron was an American-Irishman cocker who checked the birds history, and found this particular stock of gamefowl coming from the old country, and were supposedly unobtainable by ordinary means because of their winning ways.  Mr. Stone's Irish agent said he procured a trio of birds from a flock that had been carefully and zealously guarded for a century or over: not a feather had ever gone out of the possession of the owners but one of the wardens of the estate traded a stolen trio for his pet racoon and opossum which Stone's agent had brought over from America.

Sherron won big time fighting these cocks around Augusta's cockfighting circuit. One of the offspring of these Stone Brown Reds, a broodstag known "Store Keeper" loved to hang around the inside of the Irishman's store and bar and had the habit of crowing when the town clock tolled the hour.  Storekeeper was fought at the pit, and as both birds were evenly matched and worn out after a while, neither party would consent to a draw; until the town clock, sounded out as it struck the hour of ten...."Store Keeper" roused up, made an effort to regain, till finally he stood upon a pair of wobbly legs, crowing as loud as he could in answer to the bell as he was instinctively conditioned to, Old Sherron cheered his cock, "Listen to the old Warhorse!" To everyone's surprise the Brown Red staggered over, pounced on the other cock and shuffled till the poor opponent mas mangled dead.

At another pit fight, It is said that when this pair of cocks came in the betting was tremendous. Men became frantic in their efforts to place impossible bets on each rooster. "Store Keeper" took out his big Chappel antagonist, cutting him down to size, then shuffling him into meat shred.  Above the noise of battle Sherron was heard shouting - "And isn't he a Warhorse?" News of the underdog fight spread around and "Old Warhorse' was the most famous cock in all the world of cockfighting in the South.

Peter Sherron bred the Irish fowl under the name of Warhorse 'til his death in 1869.  After Sherron's death, Jack Allen bought the entire stock and his brother in law, Henry Hicks, fought them together until Allen got angry one day because of one sick Warhorse was given away after a main by his handler.  On the way home he met Harrison Butler and Jim Clark and told them his intentions. Butler bought all the Warhorses the next day, and he gave a trio of Warhorses to Jim Clark, of Dawson, Ga., a trio to Col. John Fair and a trio to his nephew, Dr. Pierce Butler.

These cocks were mostly brown reds, and now as mostly dark feathered and black except for a few brown or mahogany feathers in hackle or saddle.  They fight like Brown Reds, fast killers and deadly slashers that are mainly grounders.


Until our next Gamefowl feature, keep checking
REACH-UNLIMITED.COM's section,
GAMEFOWL CIRCUIT for the latest and
the most interesting reading on the
Filipino's favorite sport.