Home  »  Curious Mind  »  Only My Railgun: The U.S. Navy Is Now Converting to Kinetic Energy Weapons

Only My Railgun: The U.S. Navy Is Now Converting to Kinetic Energy Weapons

May 15, 2014       Curious Mind
Only My Railgun
The U.S. Navy upgrades ships with
electromagnetic kinetic energy
weapons
When battleships became too big for their own good during World War 2, no matter how much firepower they could carry, the U.S. Navy refocused on a faster fleet of smaller cruisers and destroyers to aid a carrier battle group in war.
For close to 3 decades, guided missile weapons and cruise missiles were the primary lethal ordnance that powered the U.S. Naval arsenal.

Now, that is changing for a more futuristic weapon that we thought only Star Wars could put together.  A mass driver weapon or railgun, a projectile firing gun that uses electromagnetism to slingshot its ammo into targets at speeds faster than the speed of sound. 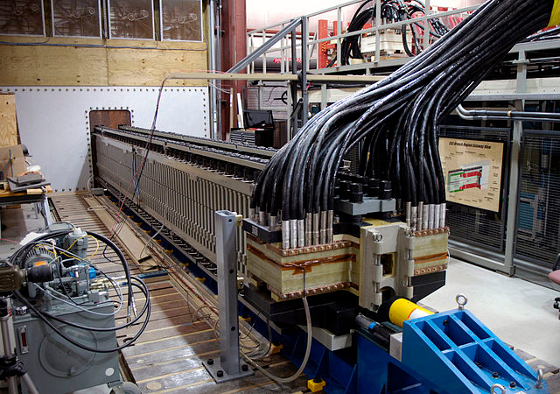 Image Credit:  U.S. Navy photo by John F. Williams
Electromagnetic Railgun (EMRG) laboratory launcher, located on
board the Naval Surface Warfare Center
The Navy hopes EM railguns will be the next level for modern naval warfare. It has spent ten years and at least $240 million developing the effective weapon and plans to install and test a working prototype aboard a designated high speed ship, in fiscal year 2016.

Since 2005, the U.S. Navy has been actively testing live-fire railgun technology at the Naval Surface Warfare Center in Dahlgren, Va., and the Naval Research Lab where the service has a number of prototype systems.  Tests for multiple firings of 10 rounds per minute are the goal after initial tests have already proved that single shots are indeed as lethal as any missile weapon.
High Energy EM railgun technology uses an electromagnetic force - known as the Lorenz Force - to catapult a projectile with extreme velocity, from zero to 5,000 mph in the span of 1/100th of a second, from between two conductive rails.  This guided projectile can range for greater distance to targets than conventional guns because of supersonic speeds from firing--up to 110 nautical miles.   It maintains enough kinetic energy that the force of impact--currently about 32 megajoules of force,  is as destructive as any  kind of high explosive payload when it strikes its target.
The new weapon in the U.S. Navy arsenal is expected to be effective against multiple threats, including enemy warships, small boats, aircraft, missiles and land-based targets.  The current version is made by BAE Systems and draws power primarily from battery-like components, eliminating the safety concerns that go with using gunpowder or other old-school explosive propellants.  The testing will aim for multiple firings in a matter of minutes, and improve upon durability of the gun and thermal management--avoiding dangerous meltdown when extreme pressure and heat build-up push the weapon to its limits.

A U.S. Navy Zumwalt-class Destroyer if it were
equipped with a EM Railgun
EM railgun technology will complement current kinetic weapons (AEGIS-Vulcan defense systems) currently onboard surface combatants and offer a few specific advantages.  Because destroyers can only hold dozens of missiles, with the new railgun weapon they can stock hundreds of rail gun projectiles.

Even if the enemy launches several missiles at friendlies, Allied  ships will just keep shooting them down and not worry about running out or choosing which threat to take on.   Costing 25,000 each, the 23-pound railgun projectiles cost less than normal missiles which go up to $500,000 to $1.5 million.

The projectile itself is being designed to be common ammo with current powder guns for flexibility.  Guided missiles will still be retained as a solution against more complex threats.  The final testing will help the Navy adjust for a future tactical design for the needed ship modifications before fully arming and deploying  each U.S. Navy ship with  the technology.
kinetic energy weapons, u.s.navy railgun, rail gun, railgun projectile, navy weapons