May 8, 2014       Gamefowl Circuit
Robie Yu Panis
Gamefowl Blade Mastery Level 20
A gaffer in gamefowl technical jargon is the person who attaches the small knives or gaffs on the spurs of the legs of the fighting cock to be paired off in the arena.

Gaffers or mananari are usually old men, who live and breathe the sport, carrying their set of blades into an arena for the visiting mananabong to hire on the spot.
Robie Yu Panis is the official gaffer of Firebird Farms when the Farm competes in major cockfight derbies around the country.  Most of the smarter farms have figured out that having their in-house gaffer or mananari greatly improves the odds of winning a fight rather than relying on uncertainties brought by hiring a tambay gaffer at the arena to do the job. 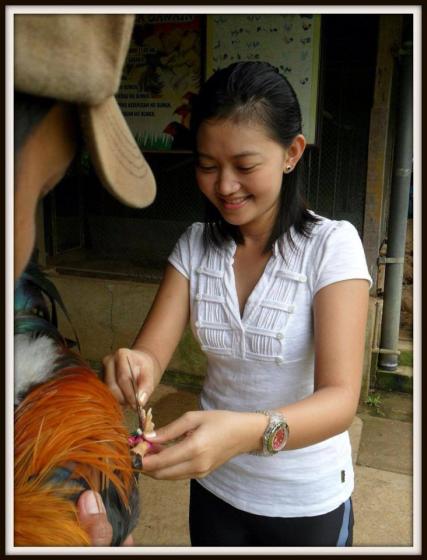 She used to be a secretary before getting hired by Sir Biboy Enriquez to do work for the Gamefowl farm and eventually graduating to the most prestigious job for any gamefowl farm employee, the in-house mananari or official gaffer. 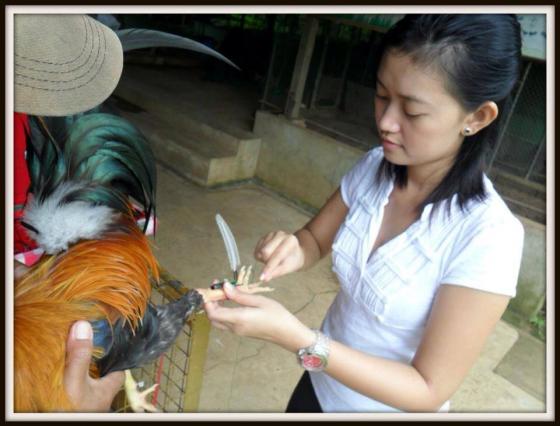 Fixing the tari blade at a preferred angle of 1 o'clock for a bigger
wakwak sugat when the stag hits
Taught by several veteran gamefowl gaffers from around the country.  Her craft is a mix of the best of what the old school has learned from experience and she has even infused her own unique tactical ideas on blademastery for gaffing in gamefowl fights.  After just a few years into the business and sport, Robie has learned insights about the craft that can be gleaned only through experience and careful observation of her farm's brood of fighters and performances of the blades she uses for helping her fighters win. 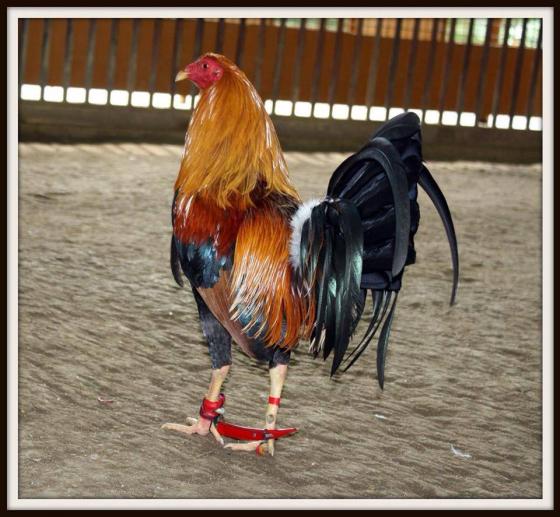 The champion stag wearing the Firebird custom tari:
semi-slasher type blades.  Ready when you are sir... 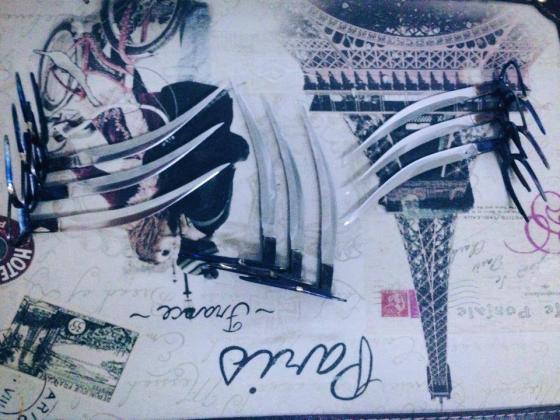 Robie prefers semi-slashers over slashers (too long according to her) and has her entire set of blades hand-picked and custom made using DM05 steel.  She keeps her weapons in 2 Hello Kitty tool boxes carefully wrapped in cloth to keep them dry and keen.  As a gaffer she ties and sets her blades at the 1 o clock position for maximum damage and even positions them at an angle to the side rather than straight down so that wakwak at punit ang sugat, hindi lang basta makakahiwa kapag pumalo ang gamefowl niya.  Firebird's fighters are so superior that they take to the air and when the opponent rises for the challenge, it takes two hits form their champion on the descent to ensure a quick victory.  Some opposing birds are smart and do not take to the air when Firebird's Kelso's and Sweaters fly and dive for the kill so Robie's blade mastery and knife placement tactics ensure that even when the birds grapple or do ground fights, it is the Firebird stag that emerges over the torn and shredded opponent. 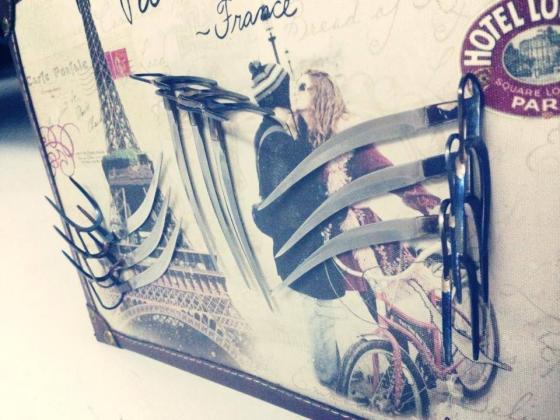 The winning Semi-Slasher Blades or Tari sitting on
top of Robie's custom toolbox.
In an interview with REACH magazine, Robie has been candid and frank about how the sport has evolved into an exacting science, even with weaponcraft--the gaffing techniques and blades a cockfighter chooses for his brood.  Teaming up with her mentor, veteran gamefowl breeder Sir Biboy Enriquez ans using a proven line of fighters, the Firebird Farm has consistently won the top 2 placings in most of the tournaments that they have joined in 2013.  And reaching the semifinals in the last World Slasher tournament, Firebird Farms expects more victories this 2014. 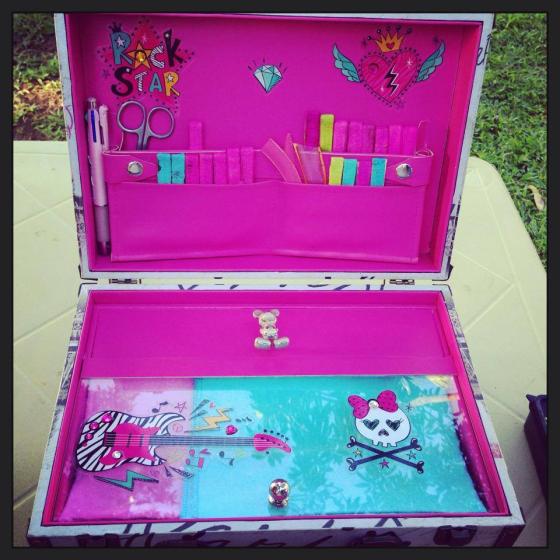 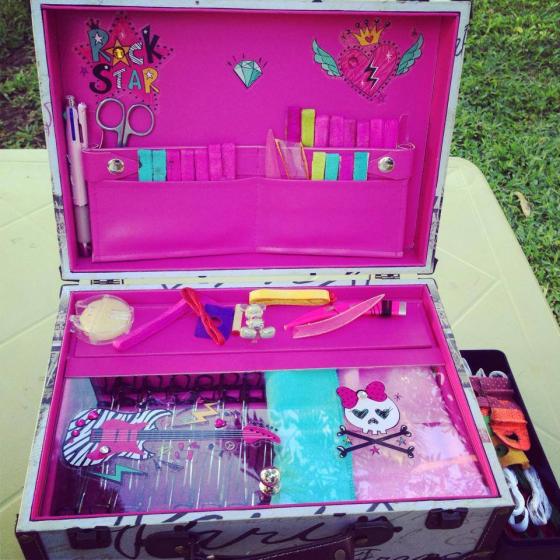 There are dangers with big time money derbies, to the point that, a game farm truly needs to have its own gamefowl gaffer / blademaster to properly equip their stags.  Some freelance gamefowl gaffers at a derby can be bought to make even the best roosters lose a fight by attaching dull blades, Robie told us, she has seen several fights before she became head gaffer, that had their stags hitting their opponents multiple times but not connecting, indicating that the attached blade might be short cutting or might be dull.  Another danger is the use of poison to make an opponent's stag lose, the poison is so sly and unseemly that according to Robie, pinipitik lang sa manok kapag tinari tapos kapag nasa ring na patay na na siya sa kalaban.  Big money is involved as prize money and some competitors are so unscupulous and unsure of their bloodline's competence that they have to resort to shenanigans to win it all.
The good thing about Firebird Farms is that they can stand by their name as a breeder of PROVEN bloodlines of fighting gamefowl and their system for training and fighting derbies is also readily and openly shared by the owner himself, Sir Biboy Enriquez.
The remaining big derbies of 2014 promise to be an exciting time for Robie and her pambatong champion fighters.  Her blades will make sure of it.
gamefowl, robie yu panis, gaffing, mananari. tari, spur knives, semi-slasher, firebird farms