Home  »  Cutting Edge  »  Slums: Designing A Better Way Of Living For All Of Us

Slums: Designing A Better Way Of Living For All Of Us

survival tech in the 21st century

Remember high school science class when you were asked to build an ant farm or a field trip to a honey farm to see beehives? And how in some art and architecture schools, one assignment was making a miniature shanty design out of junk? Unlike the insect kingdom, we have a very unique communal living system to study and even test for ideas for survival living. The slums.  There is even an online course about Subsistence Marketing which involves the means for such communities for making a living. The slums. Locally insulted as 'squatters,' a very particular Philippine-ism that identifies communities of ramshackle houses illegally set up in vacant private or public undeveloped areas.

Slums are the unique urban nightmare that can teach us a lot about society and the management of scarce resources. Take recycling, which most any of us who lives in a home of our own do except for segregation of garbage because there is a penalty fine for those who do not. In slums, recycling sometimes is the only way for survival.

The entire slum community adapts to poverty of resources and this helps them live through scarcity. A slum is both n individual and a group. Individuals within the slum work organically because 'pakikisama' is essential to surviving. Slum dwellers grow and adapt together. So a slum community is more resilient in a manner of speaking because survival for everyone requires trust and interdependency. 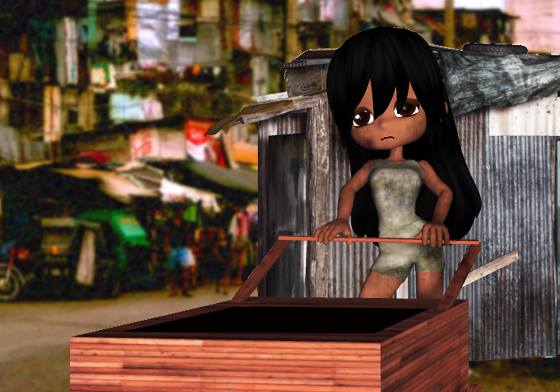 The UN estimated in 2010 that 830 million people live in slums all over the world. These are huge numbers that live in dangerous living conditions.  We must help these people because there is also a lot to be learned from their way of life. Cynthia E. Smith, a curator of socially responsible design at the Smithsonian's National Design Musem in New York has been traveling around the world researching slums: “We can learn from developing and emerging economies how to create innovative solutions from limited resources and challenging environmental requirements.”  Slums can provide priceless insights into designing for density , mixed use areas and social inclusion according to Smith.

For off-grid, micro-generated renewable energy systems, and living off-grid, just look at a slum community or work in one to experience first hand how the system survives.

The last thing one wants out of slum environment research is the degeneration of a means of survival into a circus the way slum tourism is being unofficially bannered by some, including the media.  Sensationalist media outfits are rating high with soundbite vampirism of supposedly letting everyone else know how difficult it is and how amazing it is that poor humans still get by. Remember the 'Mang Pandoy' circus touted by one TV show to hoodwink an entire nation to think that those down and out are the real deal?

Slums should never be a source for urban tourism. There is no glamour in poverty and it is NOT nice to live in a slum as Alejandro Zaera-Polo, the dean of the School of Architecture at Princeton University. Slums are the living nightmare of those unfortunate enough to have only so much to live by—there is poverty, crime and disease that dwellers have to live with every day and sometimes for the rest of their lives.

There is also the trap of romanticising the conditions of poverty. Like bohemian artists who make some obscure place their home then move out when the rent rises because the place is a hip melting pot or is being gentrified. Tourism that is sold on tours of slum communities is outright bad form and should never be supported even if it alleviates the economic harshness of the locals.

Despite the stumbling blocks, the study of the slums for its inherent resourceful systems for survival and how it thrives despite all odds provides ways to improve our own lives. Even the slum dwellers get better tech in the long run from community planners.

Off-grid systems most often get their first acid taste in impoverished communities to see how they can hold up and provide the minimum resources for the community to get basic services. Solar power and wind power have found incredible markets for community planners seeking to provide off the grid communities with a means of survival.

For the rest of us, design inspired by the study of pre-fab and ramshackle slum housing has enabled entrepreneurs and designers product lines that offer low cost DIY dwellings with simple to build instructions and very, very resilient building materials. One more example comes from Chilean architects Elemental, who designs half-built houses and allows the dwellers to put together their home in the way they want. This could lead to a major change from uniformly monotonous and overpriced suburban living and high-rises dictated by monopolies of home-building to affordable, more efficient and resilient ( even if off the grid ) organic community design.

For all its inefficiencies and impossibilities, slums still sustain survival and a sense of community.  We can create a better society from what we learn.