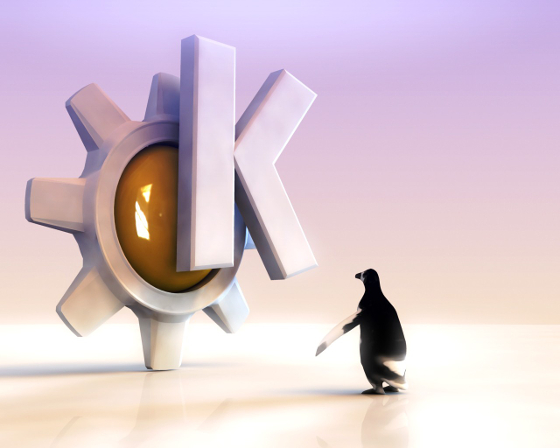 You might have heard about them Linux distros especially Ubuntu, and you want to tinker with one for your tablet or laptop before you commit to an entirely new way of personal computing, migrating from paid software to the awesome and significantly more stylish, Open Source, Ubuntu OS. 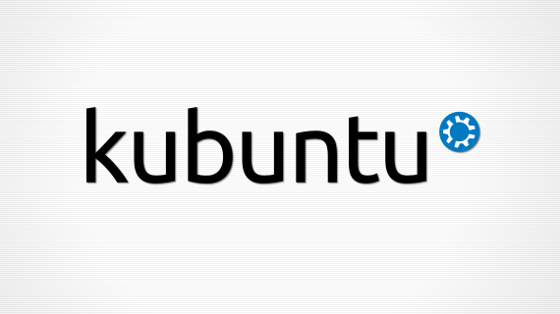 Not sure if an Ubuntu OS will look as good as your Windows interface and desktop?  Kubuntu is your best choice of Linux distros if you are considering a very powerful and gorgeous Ubuntu desktop replacement for your Windows rig that is still easy to install, has the same apps you can take to as easily as your old Windows apps, yet runs fast even on minimal resources and even on older machines. 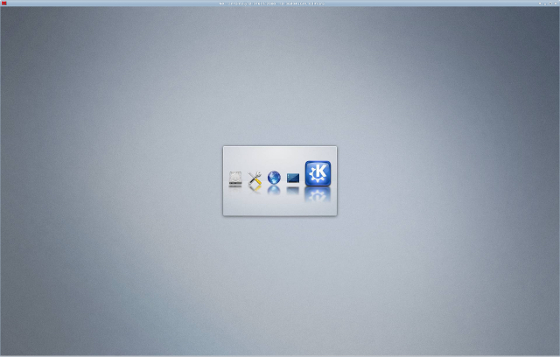 The Kubuntu loading screen for a desktop PC installed OS.

Kubuntu's KDE flavored Ubuntu OS has vastly improved speed and performance in only 6GB of HDD installation space for this lightweight yet heavyduty Ubuntu Linux distro.   Just go to the kubuntu.org website and download the linux distro fit for your equipment specs.  The installation may be directly downloaded or in bit downloads via torrent and burned onto an installation disc for easy installation replacing paid software on your system. 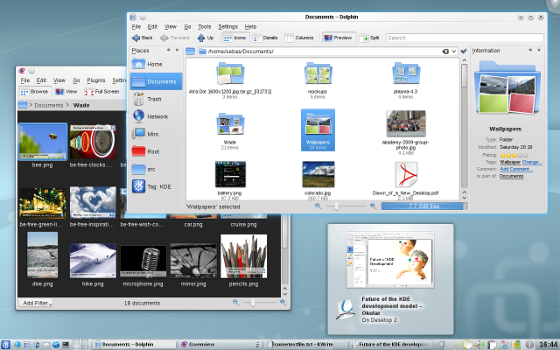 The KDE Plasma interface, your KDE desktop for Kubuntu, sleek
and eye candy.  Powerful apps included in the OS too.  all FREE.

KDE delivers extensive and easy customization. KDE offers the most visually attractive Graphic User Interface among different form factors available for UBUNTU Linux Distros, from Edubuntu to UbuntuStudio to Ubuntu Universal Edition.  For the latest Kubuntu, there is the Plasma Desktop for desktop computers, Plasma Netbook for netbooks, and “Plasma Active” for Nokia smartphones and tablets. 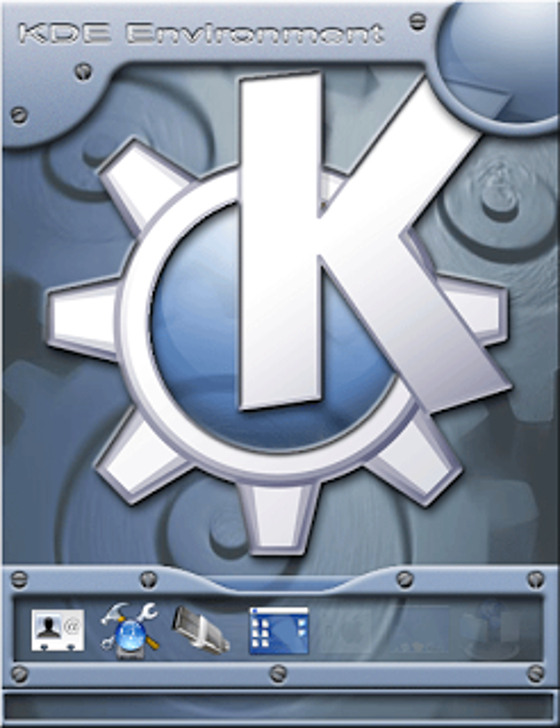 KDE desktop interface for mobile devices like
the Nokia smartphone and tablet.

Whether you use a desktop or a tablet, the KDE interface unique to your device will help you use Linux best.
First thing you notice when you use the new Kubuntu KDE is the way windows maximize and minimize. You control the ‘look and feel’ of your desktop with Kwin, which offers more than just jazzy animations, including the ever popular 3D desktop cube. There are many effects available by default which you can easily enable and disable. There are even more desktop effects available from kde-look.org– from behavior modifying scripts to the older windows switchers.  All downloadable from their site.
The settings on Kwin enable you to personalize your PC, fitting your style like control panel on Windows but with more powerful features.  The more spare desktop environment option used by other Ubuntu distros, Unity lacks the personalized customization of KDE, opting for a cleaner and uncluttered window environment preferred by some users. If you are migrating from Windows to Ubuntu and choose the KDE desktop flavor of Kubuntu, you get the sexiest desktop you can personalize among all the Ubuntu distros including GNOME, Unity (Mate), and other interesting Linux desktops. After all, why switch to Ubuntu if you can't get something looking waaaaaay better than Windows can ever dream of. 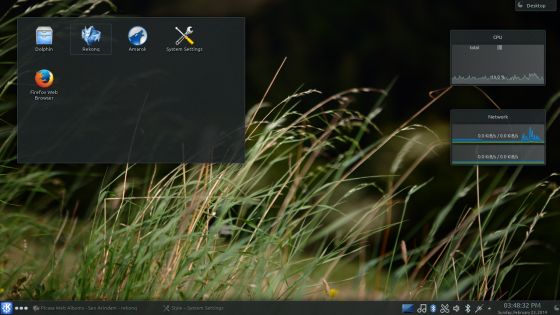 Menu customization for your desktop with various options shown
and this for KDE 13.10

Dolphin gets better and faster

You might think that a Linux Distro comes with just a barebones paint program, a web browser, and a notepad-like text editor.  But ALL Ubuntu distros come fully packed with a power suite of multimedia, graphics and office suite apps.  All for free.  All running stable and zippy even with minimum equipment specs.  Here is what you can get with Kubuntu's own KDE application suite: 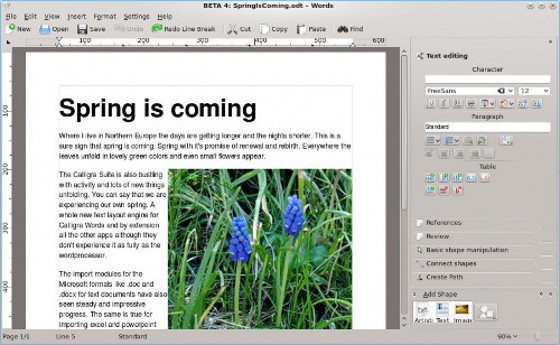 Words app, your Koffice word processor integrated with other  Koffice
apps for true power.  You get all the desktop publsihing you need.

Words is an intuitive word processor that has powerful desktop publishing features like image and text layout design controls.  Create informative and attractive documents from media kits to simple infographics with pleasure and ease.  The KDE word processor features: 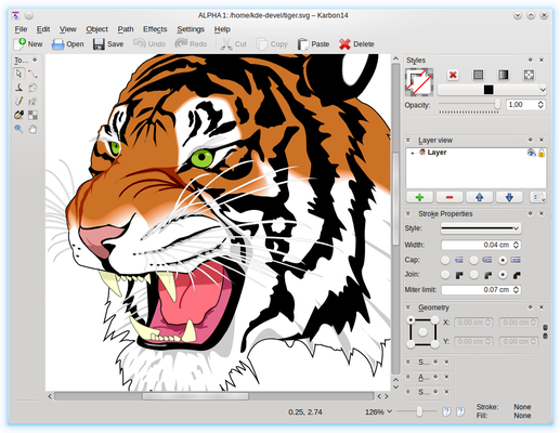 Karbon 14 is the graphics package vector image generation app,
for digital illustration users.  You get FREE software upgrades too!

Karbon14 is a vector drawing application like Inkscape with a simpler yet flexible and highly customizable interface.   For work that involves vector graphics, typography design, print design, desktop publishing art, and anything you can do on a powerful, modern, illustration software.

The Kubuntu website lists the following technical features of Karbon 14 as a vector drawing app: 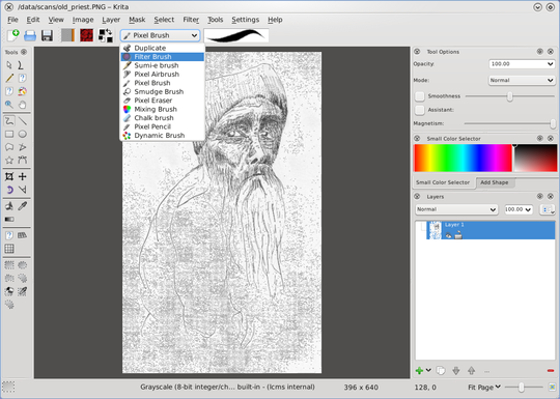 Krita is the digital photo editing and digital painting app included in
the Kubuntu graphics design apps package.  Easy to learn and use.

Krita is a bitmap imaging suite included as an integrated part of Koffice. From digital photo editing to digital painting, and illustration, Krita is your powerful media creativity tool for working with image editing and image color rendering. The KDE app supports many image formats, colour modes and profiles and the documents you create in Krita can be edited in the Koffice suite according to function..
The Kubuntu website claims the following features available in Krita:


These are just four of the many useful and powerful apps that come pre-loaded for FREE on your Kubuntu OS.  There are more mulitmedia apps that can play a variety of media files, from music, video, to picture slideshows.  Kubuntu is one of the most powerful low resource linux distros that you can get and the learning curve switch from one graphical operating system to another won't be that difficult since all the apps and the system is designed for ease of use.

Kubuntu's KDE interface and powerful apps provide you the best reason to switch from paid Operating Systems to and Open Source one like Linux's Ubuntu distros.   Aside from the power of Linux, you get to work on a computer that can be configured any way you want it to look.  Clean desktops like Unity are a preference all its own for some Ubuntu users, but for you who want to explore the power of Ubuntu over systems like Windows and still want your desktop to look as sweet as you can customize it, use the KDE desktop themed Kubuntu..

KDE is also the most advanced Linux desktop environment because it has different editions for desktop, tablets and net books, so it is tuned for any future user's needs already.  No lost functionality using an interface designed for mobile on a desktop. . KDE offers both extreme an accessible interface that is also extremely customizable to user preferences, if you care to tinker inside the hood.  Kubuntu is a very low resource OS and can run most of its apps with no hitch and provide you with the stability and security of a Linux OS.  All of this for FREE.